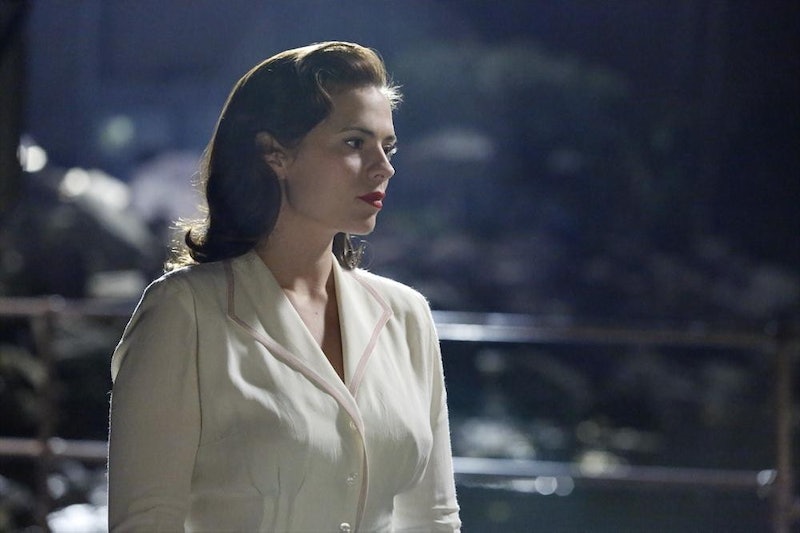 Agents of S.H.I.E.L.D. may still be on winter vacation, but I could not be more excited for what Marvel and ABC are serving us up this January, even though we still don't know a lot about Agent Carter . Every time I see an ad for it on my television, I get a completely different idea of the tone. Some trailers make it look like a cult-action adventure, others make it look like a super serious romance, and some make it look like a spy comedy. I love the character and Hayley Atwell, so whatever the genre is, I will follow Peggy Carter's show and her Carmen Sandiego hat to the ends of this earth. The Mary Sue described Agent Carter as Alias set in the 1940s. Perhaps that's because of the wigs. The series will premiere on Jan. 6 and detail Agent Peggy Carter's post-War and post-Captain America adventures. The movie may have flashed to the future, but Peggy's story didn't end there.

Let's start with the basics of what we do know about the series. Agent Carter will run for eight episodes, beginning with a two-hour season premiere. It has been teased that we'll meet Peggy's husband on the series. Remember, Howard Stark is not her love interest! Not that I would fault her, but sometimes fondue is just fondue. In the comics, she is romantically involved with Howling Commando Gabe Jones. Could we see a bit of that on the small screen? Not that everything needs to be about romance. Even in Captain America, that was not the most interesting thing about Peggy Carter.

I personally do not have high hopes for Chris Evans dropping by the show, or even Sebastian Stan as Bucky. Though, that would be more likely and totally devastating. My dream guest appearance on this show is Janet Van Dyne, the Avenger known as "Wasp" who gave the super team their name. She was paired with Ant-Man, who has a movie coming out soon. Since Evangeline Lilly is playing Hope Van Dyne, who could be Janet's daughter, and Hayley Atwell is set to appear in the film, my hopes are pretty high. She's one of the founding Avengers, and it would be a shame for the Marvel Cinematic Universe to ignore her.

Hopes and theories aside, here is everything else we actually know about Agent Carter.

In the preview clip that aired during ABC's Marvel special, we saw Howard Stark give Peggy Carter instructions, as well as the use of his employee Edwin Jarvis, played by James D'Arcy. As Marvel fans know and/or suspect, Jarvis will go on to raise Tony Stark, thus inspiring Iron Man's operating system voiced by Paul Bettany.

Here is the official ABC press release for the season premiere, also titled "Now Is Not The End." It's basically what we saw in the preview.

...when old acquaintance Howard Stark finds himself being framed for unleashing his deadliest weapons to anyone willing to pony up the cash, he contacts Peggy -- the only person he can trust -- to track down those responsible, dispose of the weapons and clear his name. He empowers his butler, Edwin Jarvis, to be at her beck and call when needed to help assist her as she investigates and tracks down those responsible for selling these weapons of mass destruction. If caught going on these secret missions for Stark, Peggy could be targeted as a traitor and spend the rest of her days in prison – or worse.

Now, here is the official ABC press release for the second episode, also airing on Jan. 6.

Howard Stark’s deadliest weapon has fallen into enemy hands, and only Agent Carter can recover it. But can she do so before her undercover mission is discovered by SSR Chief Dooley and Agent Thompson?

I'm starting to understand why this is a two-part season premiere. The title, of course, refers to residents of New York's outer boroughs.

In the third episode, according to Marvel, the SSR will arrest Jarvis! That's not good.

In addition to Hayley Atwell, Dominic Cooper, and Dollhouse fan favorite Enver Gjokaj, the cast is rounding out quite nicely. Chief Dooley is played by Shea Whigham from Boardwalk Empire, and Agent Thompson is played by Chad Michael Murray from your middle school locker. Another Agent who Peggy will clash against is Ray Krzeminiski, played by Kyle Bornheimer, recently seen as Teddy on Brooklyn Nine-Nine. Lyndsy Fonesca, known for Nikita, Kick-Ass and as Ted Mosby's daughter on How I Met Your Mother, will play aspiring actress Angie Martinelli. Stan Lee will make his traditional cameo, and James Frain will play Marvel villain Leet Brannis.

We know that Peggy will live in a boarding house, and Meagen Fay will play Miriam Fry, who owns the establishment. Agent Carter's next door neighbor is a small town Iowa girl by the name of Dottie Underwood. I wonder if there's any relation to House of Cards there.

This is interesting — Costa Ronin will play Anton Vanko. Shrewd Marvel fans will remember that name. Vanko created the arc reactor with Howard Stark. Is this the weapon that Peggy needs to protect? Vanko's son Ivan was the villain from Iron Man 2 (the one played by Mickey Rourke, not Sam Rockwell doing a Gary Oldman impression.) I wonder if we'll see a younger version of Obidiah Stone, the villain from the first Iron Man, as well.

The One-Shot That Started It All

It's unclear how "canon" this short will end up being after Agent Carter, however, the series will take place before the short. Does this mean Bradley Whitford will make an appearence? I hope so!

More like this
A Familiar 'Sex Education' Star Just Got A Major Role In Fantasy Teen Drama 'Silver'
By El Hunt
The 50 Most Powerful Characters In The Marvel Universe, Ranked
By Johnny Brayson and Nola Pfau
Lin-Manuel Miranda & Tituss Burgess React To 'Little Mermaid' Casting Backlash
By Radhika Menon
UK Viewers Will Have To Wait For The Terrifying 'Hellraiser' Reboot
By El Hunt
Get Even More From Bustle — Sign Up For The Newsletter