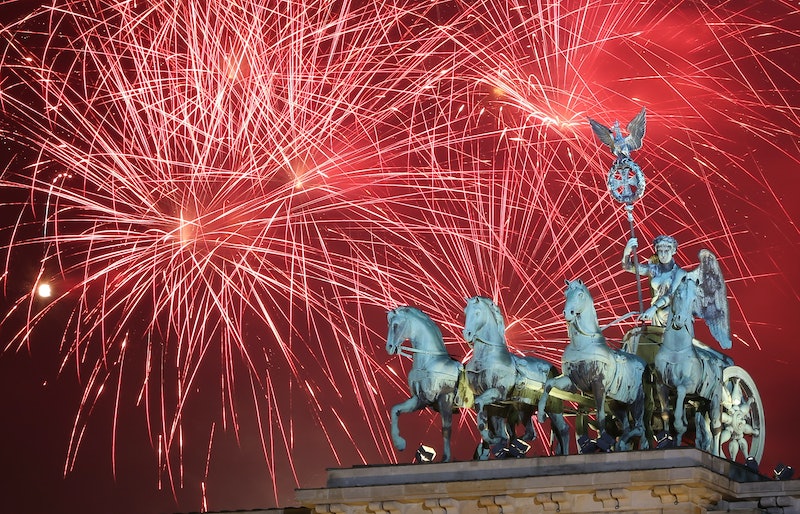 This year, I'm over Times Square and whatever they do in Nashville. I'm over drunk celebrities and their weird chemistry cracking wise while I'm trying to remember the words to "Auld Lang Syne." What else is there to watch on New Year's besides the live specials?

With so many parties and so many families planning quiet nights in while their children stay up past their bedtime, the television is full of options. There are tons of television marathons to drown out your 2014 regrets. There are also some movie marathons worth checking out.

There's a Disney Channel Original Movie marathon for all you Disney Channel fans; my mother can always be found planted in front of the Twilight Zone marathon; BBC America is airing some Doctor Who Christmas Specials; Oxygen is playing Magic Mike all night, because Oxygen knows what it's about; Sundance is showing Ghost, because you need to be reminded why Scandal 's Fitz was never a good man. December 31 is basically the seventh day of Christmas, so you can always use the occasion to watch any Christmas movies or television that you may have missed --- or swan-related programming, if you want to take that route.

If you're overwhelmed with choices, you can always put the Yule Log back on. I find that's always captivating no matter the season. But in case you're not unhealthily obsessed with fire, there are some options for New Year's Eve viewing pleasure:

If you don't like your pickings on television, why not check out some New Year's Eve themed movies? There's When Harry Met Sally and The Apartment, two now classic romantic comedies that you can rent, or dig out of your family collection.

If concerts and celebrity banter are not your thing, BET is airing the Top 100 videos of 2014. Fuse is also airing a countdown and "dance party." G4 will count down the Top 100 video games of all time. These specials, while not live, are always fun and make for great background noise, if nothing else.

I mean... if that's your thing. There's the Orange Bowl and College Basketball on ESPN and NBC Sports, respectively.

This airs on The CW both New Year's Eve and New Year's Day and will feature highlights of concerts from your favorite bands.

I know there's "live" in the title, but this isn't what one typically thinks of in terms of NYE specials. Class it up with the Gershwin program featuring Dianne Reeves and Scandal 's Norm Lewis on PBS. It's perfect for a low key Champagne and cheese get together.

Binge Something That's NOT on Netflix

Sometimes it's better to make your own marathon. Hop over to Hulu Plus and get caught up on Brooklyn Nine-Nine, How To Get Away With Murder, or Sleepy Hollow. There's also the amazing series Kings that aired on NBC in 2009 and was canceled. It is a gorgeous retelling of the David and Goliath story from the Bible and would make for a good day-long romp. Plus, Sebastian Stan is in it. Need I say moe?

If you have Amazon Prime, I recommend The Hour, a short British series that resembles both Mad Men and The Newsroom. There are kickass lady characters, aspirations of journalistic integrity, and awesome costumes. Amazon Prime also has a host of original content — as well as Orphan Black. See what all the fuss is about!

See? No matter what, the small screen has got you covered this New Year's. Happy 2015!