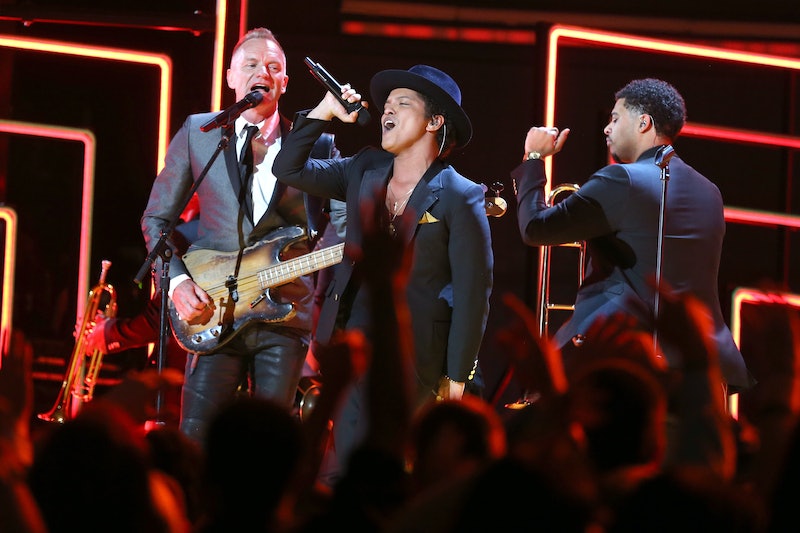 I know Lady Gaga can switch genres at the drop of a hat. But The Kennedy Center Honors , an awards show meant for the President of the United States and the height of cultural achievement, confirmed something silly that's been brewing at the back of my brain for awhile. Tonight proved that Bruno Mars sounds exactly like Sting. Did anyone else start humming "Locked Out of Heaven" during his performance of "Message In A Bottle"? It might as well be the same song. I could have sworn that Mars has done an impression of Sting before, either on Saturday Night Live or with Jimmy Fallon, but he hasn't. That's just what his voice is like. It's uncanny, and having Bruno Mars take the stage to honor this living legend just called attention to how similar they are vocally. At least he was maintaining some sense of self by sporting the same white hat he was with Mark Ronson on SNL a few weeks ago. Unless he was just channeling Olivia Pope...

The two performed together last year during a tribute to Bob Marley at the Grammy Awards. During tonight's broadcast of The Kennedy Center Honors, Mars also sang "So Lonely," which uses a reggae beat and was inspired by Marley's "No Woman, No Cry." It seems like the two artists were made for each other. I could not think of a more fitting tribute, though I think Bruno Mars may be just versatile enough to honor other artists in other genres one day, or even end up with a rainbow ribbon of his own.

I am a little bit surprised that Al Green's tribute, which included Mavis Staples and Jennifer Hudson, opened the show and Sting's closed it. I would have programmed that the other way around. Other performers for Sting included Lady Gaga, Bruce Springsteen, the cast of The Last Ship on Broadway, Esperanza Spalding and last year's honoree Herbie Hancock. Plus, let's not forget Meryl Streep's weird flirtatious introduction. Get it, girl! It's too bad we didn't get a repeat of her Oscar performance.

More like this
Mel C Wants You To Know That Margaret Thatcher Wasn’t A Spice Girl
By Darshita Goyal
Two UK Cities Are Now In The Running To Host Eurovision 2023
By Sam Ramsden and Rachel Mantock
Everything To Know About Taylor Swift’s 10th Studio Album, 'Midnights'
By Grace Wehniainen and Jake Viswanath
Twitter Is Freaking Out Over Rihanna’s 2023 Super Bowl Halftime Show Announcement
By Stephanie Topacio Long
Get Even More From Bustle — Sign Up For The Newsletter