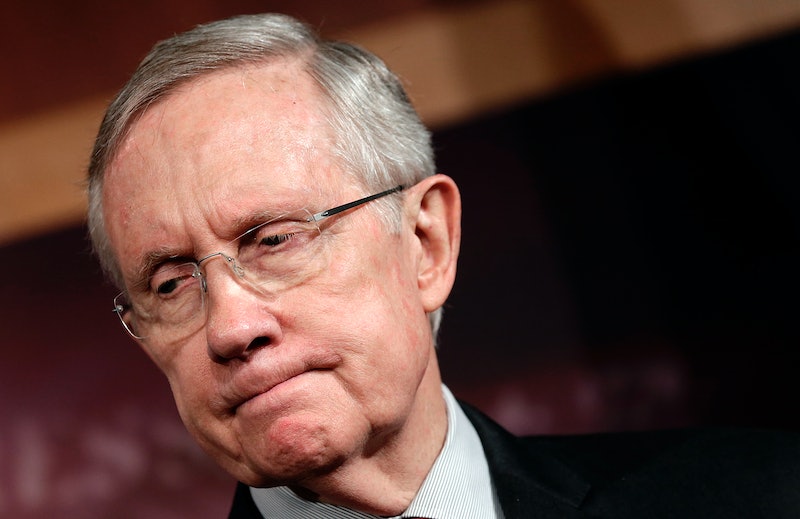 For the first time in the tug-of-war over the Affordable Care Act that prompted the government shutdown, the Democratic Party has conceded that fine, they might be willing to compromise. In a letter to House Speaker John Boehner (currently making the rounds in a Wrecking Ball parody) Senate Majority Leader Harry Reid offered a compromise Wednesday: if the House passes a motion allowing the government to reopen, the two parties will then begin negotiating on budget reform, which would include health care negotiations.

Harry Reid's letter stated that, if the House passed a measure to reopen government, Democrats would begin broad and open negotiations about the budget, policy, and healthcare, not to mention tax reform and agricultural policy. Only one of those things really matters to the GOP at present, and — clue — it's the one that apparently "sucks." President Obama has steadfastly opposed any negotiation about the Affordable Care Act, asking Republicans instead to "knock it off" and opening the online exchange Monday as planned, but as the country moves closer to the budget-increase deadline of roughly Oct. 17, the administration is growing increasingly concerned.

"There needs to be a path forward to reopen our government and protect our economy. This is a communication to you offering a sensible, reasonable compromise," Reid wrote. On Wednesday, Republican rep Peter King (R.-N.Y.) forewarned the move on MSNBC: "How do we get out of it?" he asked rhetorically, of the shutdown. "I think if they can somehow combine this with an agreement to bring up certain issues on the debt ceiling."

The letter comes as President Obama invited top Congressional members from both sides to the White House Wednesday in an effort to find a solution to the government shutdown. The pressure is real, with intelligence officials disclosing the greater risk of national security breaches during a period of shutdown, calling the current climate a "dreamland" for foreign intelligence. "The damage will be insidious," said Director of National Intelligence James Clapper. "Each day that goes by, the jeopardy increases."

As a federal agency, the NSA has had to sharply cut its number of working employees. Responded one Republican senator to Clapper, "You scared the hell out of us!" Earlier this week, the same guy, Lindsey Graham (R.-S.C.) told Fox News that Obamacare "sucks," which was equally helpful.

In other helpful commentary, another voice chimed in to be heard today.