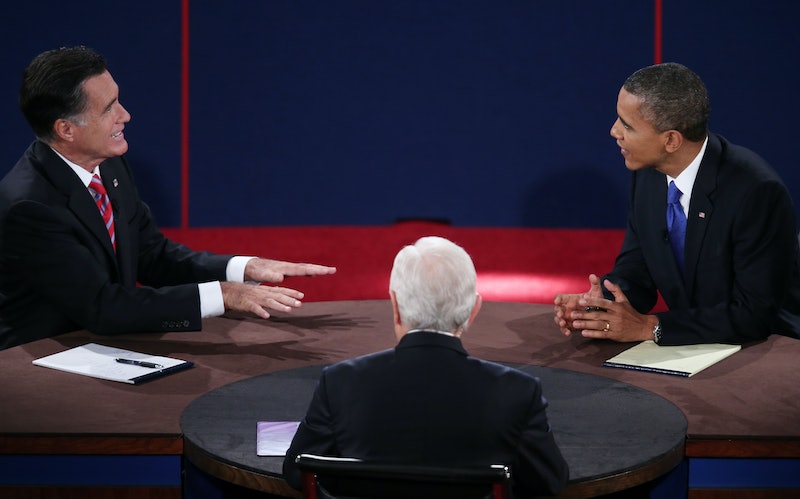 Stand down, stare-downers: A new Harvard study indicates that eye contact isn't going to help you win any arguments. Actually, it might do the exact opposite: someone you're staring down appears to be less likely to agree with your points. The research, published last week in the journal Psychological Science, is the first of its kind, and was decided upon after researchers considered just how intimidating prolonged, "persuasive" eye contact can be. (Not to mention: kinda creepy.) Animals, they point out, typically use eye contact to control other creatures before attacking them, which isn't quite what you were going for with that, um, steadfast gaze.

"The intuition that drove our research was that when someone disagrees with you and they look you in the eye in a prolonged, direct manner, it gives you the feeling of someone trying to dominate you,” said research co-leader Julia Minson. “Our reaction may be primal.”

After all, the act of persuasion is effectually a dominating one, and making eye contact in the world of animals and across cultures is a challenging and assertive act. So the researchers' theory that making eye contact with the speaker would "reduce attitude change in the direction advocated by the speaker" is logical. To test it, they whipped up two experiments: For the first, 20 participants completed surveys on where they stood on a number of issues. Then, they were hooked up with eye-pattern monitors, and researchers tracked their eyes as they were shown videos with a speaker arguing a specific response to one of the given issues. Two findings popped up

The first was that subjects who agreed with the speaker's beliefs from the outset tended to make more eye contact with the screen, suggesting that eye contact is, in fact, a way of 'bonding' — in this case, over shared emotions about an issue.

To confirm the findings, researchers conducted a second experiment. Participants were only shown videos contrary to their beliefs. They were instructed to focus only on the speaker's eyes or mouth, and, again, those who looked at the speaker's eyes were more likely to stand their previously held ground. In other words, looking someone in the eye makes their points seem no more valid, and quite potentially less.

But as for the listener, this study reveals, not so much.

"There is a lot of cultural lore about the power of eye contact as an influence tool," said co-leader Frances Chen. "But our findings show that direct eye contact makes skeptical listeners less likely to change their minds, not more, as previously believed."

A takeaway: If you have to be persuasive, lay off the eye contact. But if you're looking to amplify shared feelings (say, college graduation speech) or just get a little bonding sesh in (say, date night,) gaze away.

More like this
This Psychological Effect Might Be Keeping You From Hitting Your Goals
By Lexi Inks
10 Ways To Be More Empathetic To Your Partner
By Raven Ishak and Lexi Inks
Are Quality Time & Gift-Receiving Love Languages Compatible?
By Lexi Inks
Think Your Partner Is Cheating? These Tarot Cards May Confirm Your Suspicions
By Kristine Fellizar
Get Even More From Bustle — Sign Up For The Newsletter