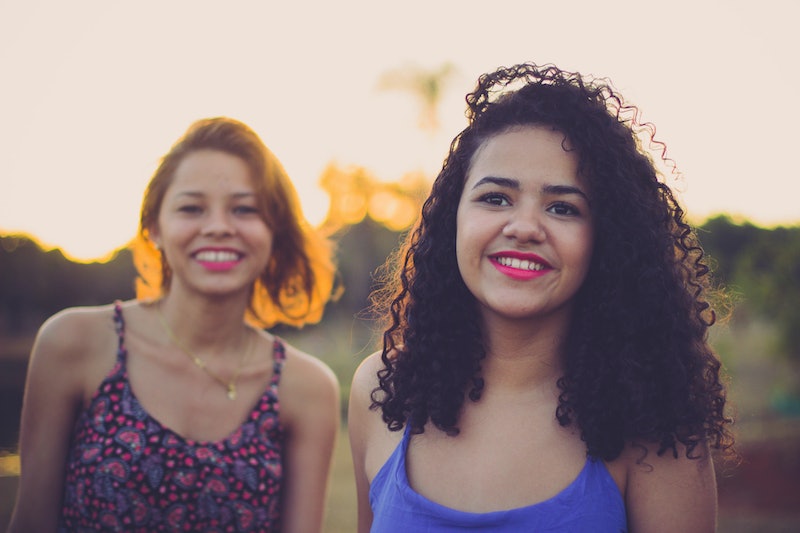 Back when I was single, I gave up on trying to meet guys. I'd tried lots of different things: going to bars, extended works functions, parties of acquaintances and even a very brief and ill-advised flirtation with online dating (which was one hundred million billion percent not for me). All I ever got was rubbish. Rubbish men who were boring and painful and mean and weird (not in the good way), and so I convinced myself that there was nothing out there for me, and I would die bitter and alone, and so many people resign themselves to doing after spending long enough mired in the bleak sea of shady nonsense that is Dating. Enter my dear girlfriend, who had a dear male friend living in another city, who she had, unbeknownst to me, decided was my The One.

And so I was "set up" on a date, a prospect deemed frightening and ill-advised by so many. But it worked for me: A year and a half later, I'm living in elated co-habitation with the person I was set up with. And so, I am a now a full-on convert when it comes to set-ups: Set-ups, despite the undue hatred poured upon the idea of them, do work. They're the best way to meet people. Having a mutual friend who values two separate people is enough to have those two separate people meet. How many times have you met someone your friend has spoken highly of, say, a work colleague or a new friend from book club, and been just as enamored with the new comer as your friend? It's for a reason: It's because you and your friend likely have similar tastes, values and ideas. That's why you're friends! Likewise, romantically, your friends are pretty well positioned to set you up with the single people in their lives who they admire enough to maintain friendships with.

If you're nodding along right now thinking, "Yes, but of course! Hank from work and Sally from school would be PERFECT together, why did I never think of this before?" please DON'T immediately start texting everyone you know trying to orchestrate this communion of destined-to-be souls. Please first take into account the following tips for setting up friends:

1. Don't offer to do it unless you can deliver

Setting two people up, especially two people you're close to, is a big deal. If it goes horribly, absolutely wrong, everyone is going to blame you. So make sure you've got the goods, and by the "goods" I mean "two people who will have a lovely time sharing a meal together".

If your friends wanted to find just anyone, they'd go to Union Pool on a Saturday night, wouldn't they? Don't look at your list of single friends and randomly put names together. Really think about the personalities you have around you and if two seem compatible, have things in common, and are both into the idea of a set-up, by all means, go for it. But always remember that "single" doesn't count as "something in common", so you need more than that to base your set up on.

3. Find out what your friends are looking for

You don't want to set up a Casanova with someone wanting to get married in the next year. Make sure you know what your friends are prioritizing so everything doesn't end in a mess of miscommunications and tears.

4. Make sure they have matching humor and core values

As stated above, "single" does not qualify as a common personality trait. Your friends are already going out on a limb, putting themselves in a brave, vulnerable position of being allowed to be set up on a date, so it's your responsibility to see that you've fit them together correctly. You want them to have the same sense of humor to ensure there's laughter, and the same core values to ensure no one winds up storming out mid-date from taking offense to something the other one said. They don't need to be exactly the same in every way (in fact, differences can we fantastic for conversation), but you don't want to pair an un-funny person with a funny one, or a feminist with a total misogynist, for instance. (Although, honestly, why are you friends with unfunny misogynists in the first place?)

5. For heaven's sake, don't join them on the date

The worst thing you can do is set up a "double date" or some kind of situation where the two people being set up have other people there with them. You might think that this will alleviate the pressure of the set-up but it really doesn't. It makes things twice as awkward; Not only are these two people trying to get to know each other, they're doing it under the prying eyes of their friends. Let them be alone, so they can joke about the situation and relax. With you there, it's almost like having a chaperone. We're all adults now, so we can do dating on our own.

Don't talk about the set-up in your extended circle of friends, and once the date has happened, don't gossip about it with both parties. You're well within your rights to ask how it went, and for a few minor details, but you can't be the confidant for both teams here. When I was set up, my girlfriend chose to only receive relationship gossip from me, because we specifically agreed she couldn't, in good consciousness, offer us both unbiased advice knowing both of our stories, without spilling private things the other had told her in confidence. Either choose one friend to get in depth with, or neither. You can't know all the things from both parties because when it comes to a fight, or indecision, you're going to be called upon to betray someone's trust, and if you do, things can get ugly. And then if you don't, you might also find resentment headed your way.