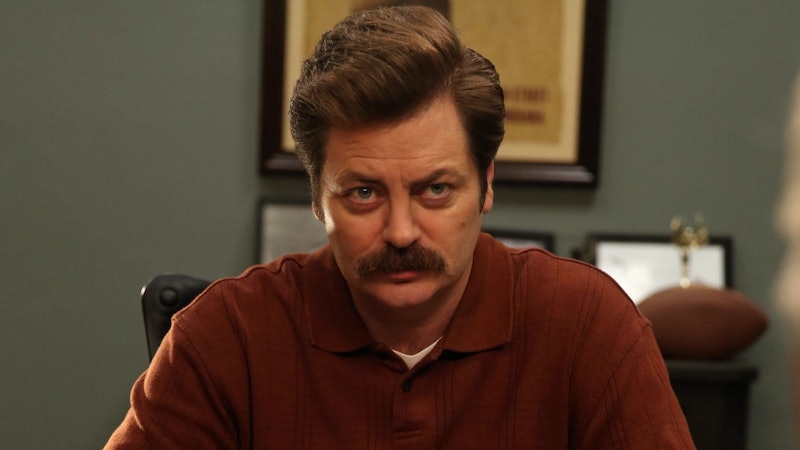 By now, you probably have a signature adult beverage. So what if you aren't one of those people who like to drink whiskey? You know what you love, and you stick with it. That's great, because having an extensive awareness of what makes you happy is the key to a life that doesn't suck. But there are times in life when a powerful figure exuding wisdom and all things cool makes you question what you once thought was the "best thing ever." Ron Swanson is that powerful figure. For the last seven years, he has been the ultimate authority in what makes a man a man and what makes this country the best in the world. But he's not just the face of the new "lumbersexual" trend. And he doesn't serve as tastemaker for just men either.

He inspires both sexes equally to figure out what they like, what makes them tick, and to hold onto those personal tastes no matter what. But one personal interest of Ron's is hard to ignore, and that's his love of whiskey. If you aren't currently a whiskey drinker, Ron might be the one to convert you. He makes it seem like a rugged lifestyle choice that will guarantee you a rich life living in a cabin you built with your own two hands. And there's no better time to start than now, since St. Paddy's Day is right around the corner and many of the best brands of whiskey are made in Ireland. Here are all the reasons to start drinking whiskey, according to Ron Swanson.

1. Because a life of restriction is no life at all

Life is too short for clear alcohols AND diets.

2. Because it's the American Way

One nation, under Ron.

3. Because it's one part of a hangover-free equation

And hangovers are the worst, so it's probably best to get drunk the Swanson way.

4. Because whiskey is not measured by the ounce

That's how many drinks Mr. Swanson drinks per week.

5. Because it comes from powerful, other-worldly sources

6. Because no drink looks more bad-ass in a human's hand

I mean, come on. You might as well be wearing a crown and sitting on a throne while drinking it.

7. Because it's made in beautiful locations

Nothing could make Ron Swanson travel to Europe... until Leslie sent him to the Lagavulin factories in Scotland.

8. Because it can save you from any form of madness

9. Because it's the only way to booze

Everything else just doesn't make sense.