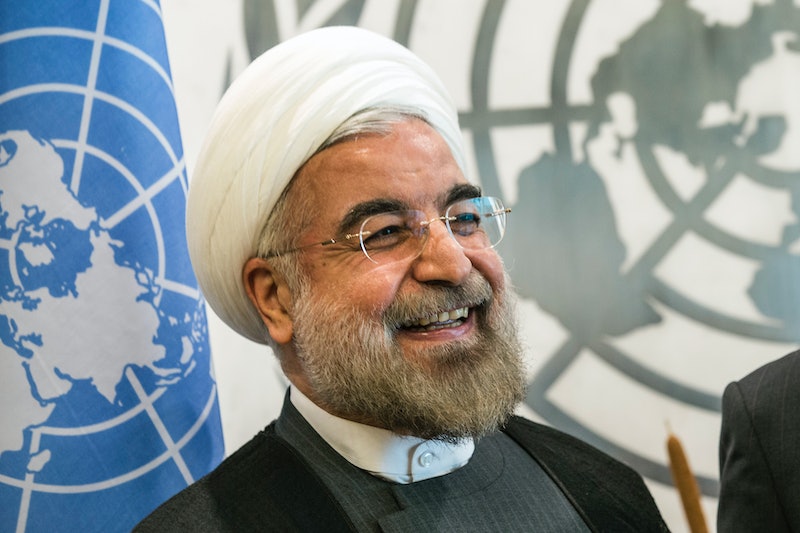 Everyone in Geneva is feeling pretty 'cautiously optimistic' today, thanks. Two days of nuclear talks began Tuesday at the Geneva summit between world powers and Iranian officials, and both sides have used that phrase to describe the diplomatic climate — a sign of things being, well, cautiously optimistic. Negotiations this morning are being kept confidential, but EU foreign policy spokesman Michael Mann said that Iran's delegation gave a PowerPoint presentation of their nuclear proposal, which included the points on which they're willing to compromise. Among the points of its proposal, according to Iran's state media, might be an offer to reduce its level of uranium enrichment — which would be a concession to UN demands. (Also helpful is the concession that we now know global powers still use PowerPoint.)

During the subsequent break, Iran's Deputy Foreign Minister Abbas Araqchi told the press that the Iranian delegation wasn't there to waste anyone's time: "We are serious for real target-oriented negotiations between Iran and the other side, and we believe that the plan that we have introduced has the capacity to reach that," Araqchi said.

Members of the "P5+1" group (Britain, China, France, Russia and the U.S., with Germany plus-oneing) have said that it's going to be difficult to get anything done in just two days, but Iran's foreign minister is hopeful: "I am hopeful that by Wednesday we can reach agreement on a roadmap to find a path towards resolution," he said in a Facebook status.

However, "no one should expect a breakthrough overnight," said a more cautious-than-optimistic United States delegate.

The nuclear talks between P5+1 and Iran are the first since the moderate Hassan Rouhani became president. Rouhani has said he wants a deal within half a year.