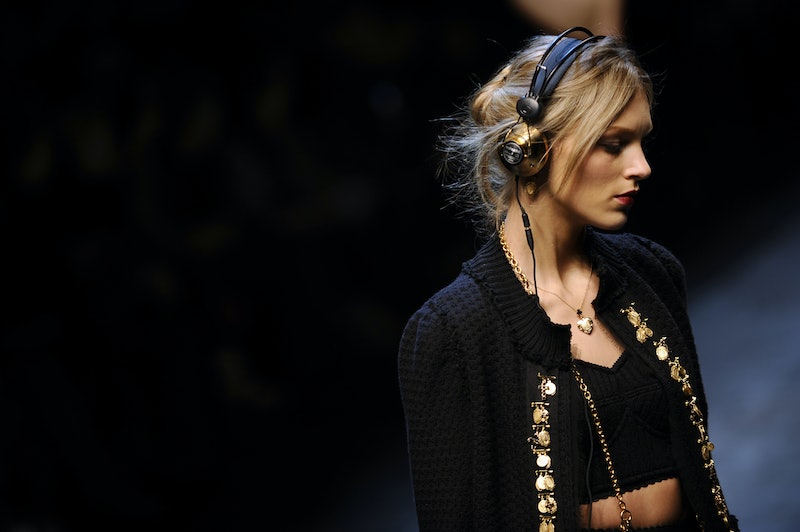 Just when you thought headphones were getting a little too pricey, one Italian fashion house decided to trump the rest by showing them exactly what expensive meant. Dolce and Gabbana's Fall Collection 2015 headphones are making a lot of noise around the 'net, and for good reason. The luxe jewel-and-fur-covered set is available for preorder on Moda Operandi for an insane $7,090. If you want the fur-trim pair (which, I would) then you must part with nearly $8,000. Oy.

Overpriced as it may be, I have to admit: I do love the runway look. Style.com's Tim Blanks declared headphones as the “contemporary crown of the modern queen.” I couldn't agree more. There is no other way to look effortlessly cool, disguise a bad hair day, and proudly and publicly proclaim introversion. I imagine the girl who wears these as the cool girl who can't talk right now because she has planes to catch and runway shows to walk.

I could sell a few vital organs on the blackmarket and afford a fur-trim pair. Anything for fashion, they say. But since they are, ya know, vita, I've rounded up some wallet-friendly alternative pairs of headphones that still make a statement. Frends, the tech company that collaborated with Dolce & Gabbana for the ultra-fancy pair seen on the runway, has tons of affordable pairs any woman can wear. The best part? It won't cost you $7,000 — just a couple hundred at most. Right this way...

You have to join a waitlist for these beauties, but they look worth it. (FRENDS x BaubleBar rose gold headphones in Layla, $175, baublebar.com)

Uber-sleek and on trend in tortoise, these would be perfect for the office. (FRENDS tortoise and oil slick bundle in Taylor, $249, wearefrends.com)

Florals are going to be big this spring (no, really...big flower patterns!) and you don't want to miss out. (FRENDS bloom and rose gold bundle, $189, wearefrends.com)

Want to share a pair with your man? He probably won't mind this pattern. (FRENDS Hollywood Regency, $249, wearefrends.com)