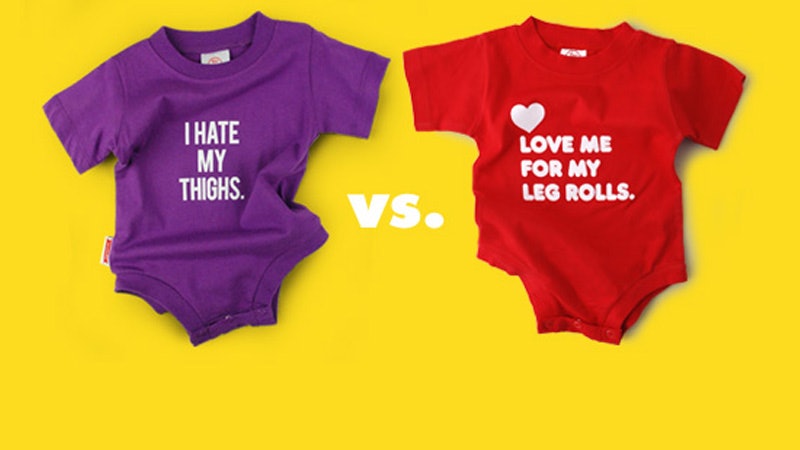 Don't get me wrong, I love a tiny baby in an funny onesie as much as the next guy. Case in point, when my nephew was born a few years ago, I definitely purchased him a t-shirt with a picture of Bob Marley on it that read, "B is for Bob." But the onesie making headlines today seems to be taking America's love for ironic slogan tees one step too far. Since Monday, all eyes have been on baby apparel company Wry Baby for a "snapsuit" they posted to Facebook that demonstrates questionable taste, to say the least. The onesie, which reads, "I Hate My Thighs," quickly had parents, editors, and journalists divided as to whether branding a newborn with a very adult, fat-shaming label was at all appropriate.

Many still found it humorous and not at all inflammatory, including the hosts of the Today show, who scoffed at how anyone could take offense to such a harmless message. In response to the growing unease with the onesie's slogan, co-owner of Wry Baby, Kelly Sopp, stated on the company's Facebook page, "What we're trying to do is make the entire parenting experience as fun as humanly possible. We equate having kids with having a good time. Why shouldn't it be?"

But the reality is, fat-shaming isn't fun. It's a very painful reality that many face on a daily basis, often beginning at a very young age. Women are taught not only to cruelly judge their, and other women's, bodies, but to actually hate them, to see them as the nexus of all of our failures, shame, or accomplishments. As you can imagine, that's no light or easy thing to carry with you, and it certainly isn't a joke.

This is exactly the problem Michele Kort from Ms. magazine attempted to highlight in her discussion over the onesie with Today.com, saying, "Our takeaway is just to get people to think about the kinds of things that we say that communicate something [negative], mostly to girls and women. Even though it was said as a joke ... it isn't a joke."

After reading Kort's statement, Wry Baby again took to their Facebook retorting, "We couldn't agree more about body image, that's why we made an ironic joke about it. Obviously no baby would hate their thighs!... But we're glad you're able to froth up your readers this week and shine a light on what is apparently a vital mission of Ms. Magazine — reviewing baby clothes."

I think Wry Baby's response to Kort and Ms. Magazine really demonstrates the entire problem underlying this story. Yes, ostensibly, Wry Baby's onesie is harmless, an "ironic" statement tee that the wearer isn't even old enough to read. But what the onesie is actually endorsing (and what Ms. is objecting too) is the proliferation of societally engrained objectification and belittlement of women's bodies. Wry Baby's curt dismissal and invalidation of Ms. Magazine's objection to their product, writing it off as a marketing ploy, is a better summary of the struggle women still have to surmount than most feminist theorists could ever hope to write.

In a follow up interview with Today.com, Kort had the final word on the issue saying, "Think about your daughters and what message that you want to convey to them."

More like this
Berriez Founder Emma Zack On Her Size Inclusive NYFW Show
By Dominique Norman
The 12 Best Strapless Bras That Won’t Slip & Fall Down
By Audrey Williams and BDG Commerce
Help! I'm Not Getting Any Attention On Dating Apps. What Can I Do?
By Sophia Benoit
The 11 Best Bike Shorts For Thick Thighs
By Claire Epting
Get Even More From Bustle — Sign Up For The Newsletter