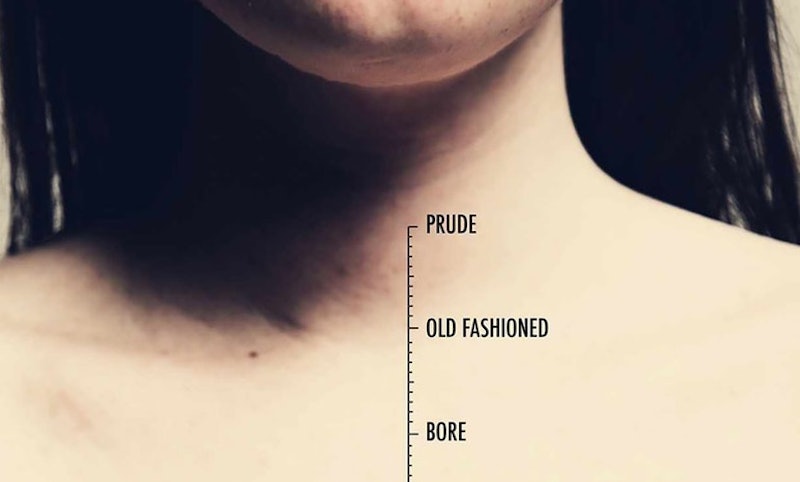 For whatever reason, a large portion of the human race decided at one point that something as trivial as a neckline, the height of a heel, or the length of a skirt could determine a lot about a woman. A piece of fabric can dictate not only people's assumptions about your personality or perceived promiscuity, but in some countries, can even be used as evidence against you in cases of rape. The human rights group Terre Des Femmes is challenging these misguided notions about women's bodies with ads that use labels to "measure" a woman's worth, showing just how absurd and offensive the notions are in the first place.

The ads are simple but extremely powerful in their message. Designed by Theresa Wlokka and a group of students at Miami Ad School in Hamburg, Germany, they depict a faceless, exposed woman whose image is cast behind a layer of measurements. All of them range from "prude" to "cheeky" to "whore," and none of the measurements are complimentary in nature, showing just how impossible it is for women to satisfy the intense societal judgment that is cast for something as simple as what they put on before they leave the house in the morning.

Beyond this powerful campaign, we have seen other ads making huge strides for gender equality and women's rights. The Salvation Army recently piggy-backed on the viral craze of "The Dress," releasing an unsettling and impacting ad featuring an abused woman wearing it.

Pantene's Strong Shine ad also threw a gem into the ring last year, encouraging women to stop apologizing unnecessarily for things they shouldn't be sorry for.

And by now most of us have seen Always' eye-opening "Like A Girl" campaign, which got some more recent airplay during this year's Super Bowl.

While all of these ads are rallying toward a different goal, they are all striving for the same ultimate end result: creating a space where women are respected as equals, not just in the workplace but in every aspect of their lives, and feel empowered enough to expect what they deserve.

More like this
15% Pledge Director LaToya Williams-Belfort On The Impact Of Supporting Black Business
By Dominique Norman
Berriez Founder Emma Zack On Her Size Inclusive NYFW Show
By Dominique Norman
Black Women's Equal Pay Day Highlights An Upsetting Problem
By Brandi Neal
Prefer Alcohol-Free Perfumes? Water-Based Fragrances Are On The Rise
By Audrey Noble
Get Even More From Bustle — Sign Up For The Newsletter