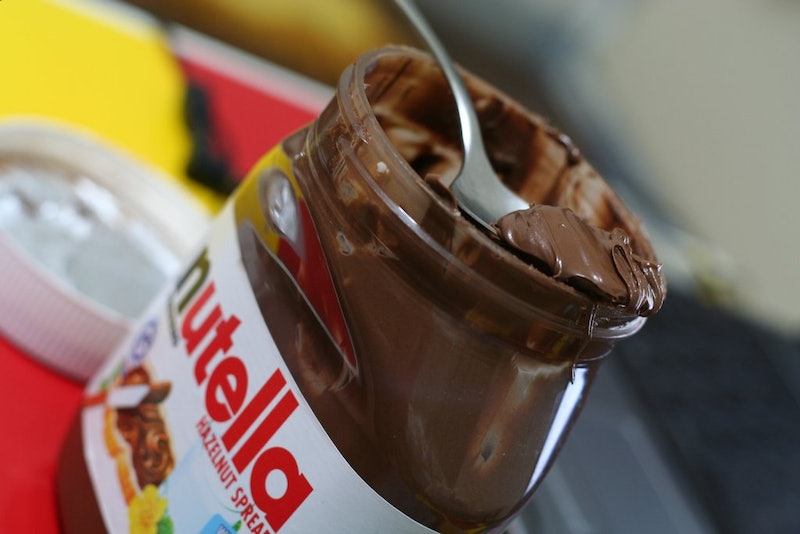 We're all aware of the fact that Nutella is manna from whatever higher powers you believe in, right? Well, it looks like those higher powers have seen fit to reward us for our worship of them, because Nutella ice cream at Carvel exists. To be fair, Nutella ice cream has existed at Carvel before; it first debuted last year, and it was such a hit that the ice cream chain has brought it back for a second round. But it's not just ice cream this time. Nutella milkshakes will also be available this year, and give that milkshakes are kind of my kryptonite… well, if I explode due to pure happiness, consider yourselves warned.

According to Brand Eating, this year's chocolate and hazelnut-flavored lineup includes the following options:

They'll only be available for a limited time, though, so make sure you get to your favorite Carvel location before May 31, 2015 — that's when it will vanish into the wild, chocolate-y yonder. For the curious, it looks like this:

While obviously I will be jamming as much of this stuff in my mouth as possible between now and the day it departs, I can think of a number of other things I could do with it to celebrate its existence; after all, it's truly a beautiful thing. Here are all the other things I'd kind of like to do with Carvel's Nutella ice cream besides eat it:

From what I gather, chocolate is fabulous for your complexion. I have no idea whether ice cream and hazelnuts are equally good for it, but whatever. Two of three isn't bad. Those “Carvel Crunchies” might add some bonus exfoliating action.

3. Throw some action figures into it and recreate the most traumatic scene from The Never-Ending Story with it.

4. Make an ice cream cake with it.

A slightly more conventional approach, perhaps, but a worthy one all the same. Nutella Cookie Puss would beat the pants off of regular Cookie Puss.

5. Use it as camouflage in the Chocolate Swamp when visiting Candy Land.

When I was a kid, it was the Molasses Swamp; however, kids these days apparently do not know what molasses is, so it was changed to the Chocolate Swamp in 2002. Either way, though, covering yourself with this stuff would be the perfect way to escape from any evildoers chasing you through King Kandy's domain.

6. Build a monument with it.

A monument to my love of both ice cream and Nutella — or perhaps a monument celebrating the holy union of the two glorious foodstuffs. The trick, of course, will be eating said monument before it melts.

7. Leave it for the Easter Bunny.

Santa gets milk and cookies, so I can only imagine how pissed off the Easter Bunny must be at being left carrots year after year. Doesn't he deserve a treat, too?