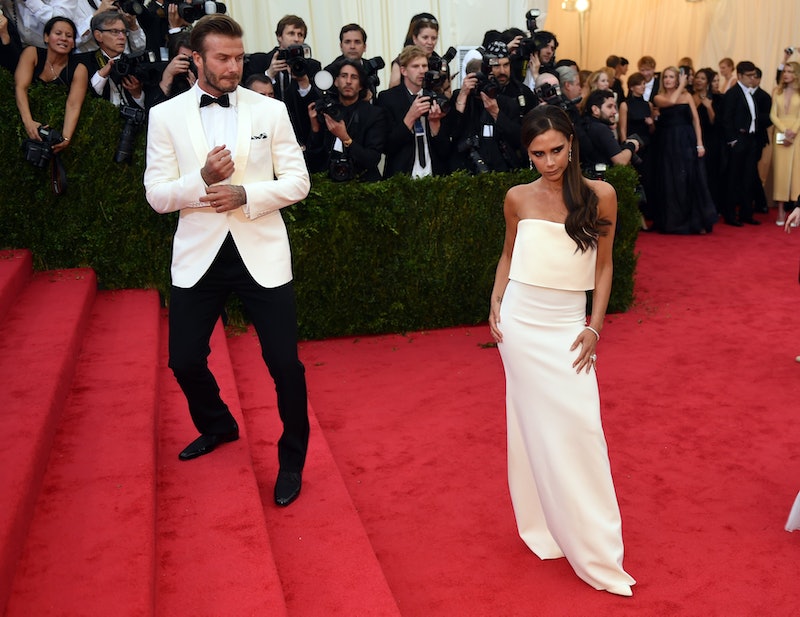 David and Victoria Beckham are one of the most famous and fashionable couples in the world, and individually, they are both pretty fabulous in their own right. But apparently David Beckham lets Victoria Beckham tell him what to wear, proving he can't help but acknowledge that his wife is the more stylish of the two. According to an interview with the Daily Mail, Beckham said he listens to his wife's advice on what to wear "99 percent of the time." Normal guys of the world, take heart; not even David Beckham has everything figured out. Beckham does seem to realize, though, that his wife is pretty much fashion royalty, and that taking her advice is a very, very good thing for his personal style. Smart man.

Would David Beckham look generally good in anything? As cliché as it is, the answer is probably yes. But the Beckhams are more than just a gorgeous, longtime power couple at this point; they're a brand. My guess is that there are no casual Fridays for in the Beckham business and/or household. They simply have to look good all the time, and according to Beckham, Victoria has no problems telling her husband exactly what it is he's wearing that she doesn't approve of.

"The best fashion advice Victoria has probably given me is not to wear something. She's told me quite often because honesty is important when you're in a relationship," Beckham told the Daily Mail.

Victoria gives him advice on what to wear, and according to Beckham, he listens—"99 percent of the time." Now let's get to that 1 percent: What does he wear when he chooses on his own and Victoria doesn't approve? That's the real question. And what's more important: Can we tell which outfits are which? Well, we can certainly try, with a little game of...

Which Beckham Picked This Outfit?

This one is from 2003, and it's very obvious that Victoria was behind this. I mean, matching all-white ensembles? Let's be real here, guys. All Victoria.

OK, this one is a tough choice, because it was 2004, a rough year for everyone when it came to fashion. Is Victoria in a Pirates of the Caribbean scene here? Are the BOTH in that scene? Still, I can't say many women would support THAT many unbuttoned buttons. I think this one was all David. Minus the necklace.

Here we have the classic suit — with a special hint of shine. I would have to say Victoria chose this look, and it generally works for Beckham. I would also have to say that I'm more concerned with her look here than his.

Any time that there is a scarf involved in a man's outfit, I am suspicious. Now, before this whole "I let my wife pick out most of my clothes" revelation from David, I would have said that this look was his choice, but now? No way. Whenever there is a scarf thrown in superfluously, you know that there is a fashion-obsessed person behind the look. But the jeans. The jeans are all David, guys. And why, WHY ARE THEY SO BAGGY IN THE KNEES?!

This jacket is just much too complicated to be David's choice. Why so many buttons and buckles? Were you previously attending a super chic asylum masquerading as a day spa? Still, there are those baggy jeans again...

I don't know WHO chose the striped suit, but in any case: WHY?

This is all Victoria and it is so, so good.

This is the most bro-ish look I've seen from Beckham yet so, obviously, I think Victoria was absent when it came to this look.

This look is SO good. And SO Victoria Beckham-approved.

The Black And White Gala Ensemble

More like this
Victoria Beckham Loves Teasing David About His “Sticky” New Hobby
By Sam Ramsden
Bella Hadid's Flare Jeans Under A Dress Outfit Is So Nostalgic
By Allie Fasanella
7 ‘Ugly’ Trends Kendall Jenner Makes Look Cool
By Allie Fasanella
These Are Kylie Jenner's Best Paris Fashion Week Looks... So Far
By Dominique Norman
Get Even More From Bustle — Sign Up For The Newsletter