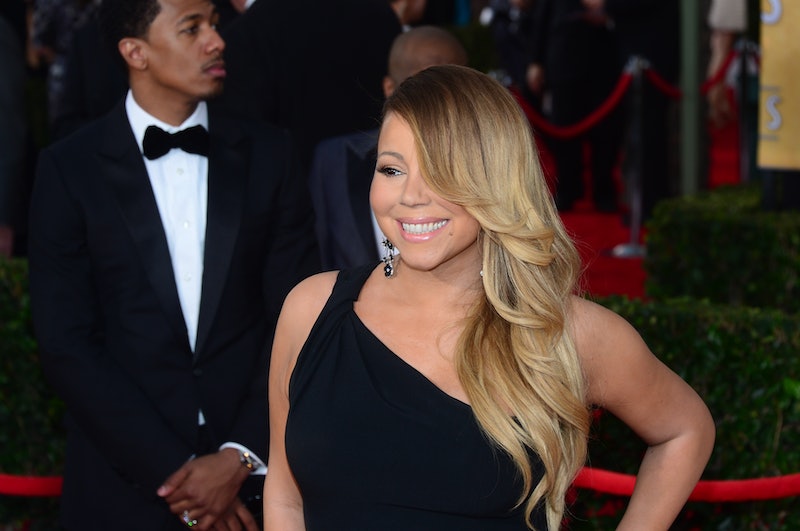 Those curly locks took way too long to make a comeback. Yesterday, Mariah Carey rocked her '90s signature curls to dinner in Hollywood. It was like I was watching her "Hero" music video again. Quite perfection if you ask me! The style is much different than we've seen in the past couple of years—not her usual slicked back hair or supermodel waves, but to tell you the truth, THIS is the Mariah I've loved and missed so much. With recent rocky events that happened, including her divorce with ex-hubby Nick Cannon, it's awesome to see Mimi rock that bright, bubbly smile with her diva-esque hairdo. Because after all, she is a diva, and will forever be.

If it already wasn't apparent, this definitely sets it in stone: the '90s are totally coming back. On top of the hair crimping, jelly sandals, and crop tops that won't ever seem to go away, I'm glad that Carey decided to take her hair back to the '90s with those curly locks. Carey paired the hairstyle along with a black skirt, tights, boots, and a bright yellow jacket. Oh, and to make things even more 'of a blast from the past, Carey was spotted at dinner with Courtney Love!

Carey was at dinner with both Love and film director Brett Ratner at Craig's. It's unknown why she was seen with the two, but according to People, "Clearly the longtime film director and producer (Ratner), who directed Carey’s 1999 “Heartbreaker” music video, was the link between the two, having recently snapped a selfie with both ladies at two different parties."

Beautiful, right? It's like she never ages. I just really hope this hair isn't a one time deal!