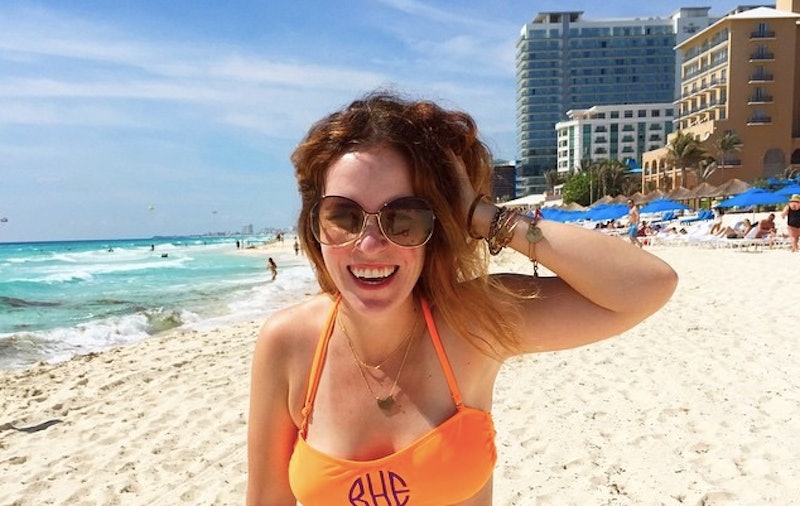 I think (at least I hope) that the world is pretty clear on the fact that pregnancy involves weight gain. But while that might seem self-evident, apparently some people are still unclear about what it means — which is why Los Angeles mother Rachel Hollis decided to flaunt her bikini body, stomach, stretch marks and all. Because she doesn't have anything to be ashamed of, and the world should know it.

Hollis posted a photo of herself in a bikini on Facebook with the caption,

The photo went viral with many people expressing their support — and many moms commenting that Hollis had inspired them. Plus, she looks great.

It's a strange world that we live in, where women are constantly bombarded with the message that we're supposed to want to have babies — and where lack of reproductive health care options in some parts of the country means we might wind up with one whether we're ready or not — but where the totally natural effects of having a child are considered undesirable or even shameful. I mean, I get that our culture also has this unhealthy love affair with unrealistic beauty standards, but still. The fact is that creating a human life from scratch inside of you often has permanent effects on your body, like stretch marks or extra weight or flab. It's nothing to be ashamed of.

Nonetheless, lots of moms still get shamed for their supposedly "less than perfect" bodies. Tanis Jex-Blake, a 33 year-old mother of five, took to Facebook after she was publicly mocked after wearing a bikini last summer. A middle aged mom was actually kicked out of a water park last year for wearing a bikini and refusing to cover up more — despite the fact that younger women were wearing much smaller swimwear. And those stories are just from the past year.

The thing is that, although we treat certain bodies — aka, young, skinny bodies — like they are some sort of default state, that isn't actually how bodies work at all. Not every body is going to look that way ever, and even if someone looks like that at one point, that doesn't mean that after their body goes through something — like pregnancy or injury or weight gain — that it will magically be able to rebound back to the way it was before. Bodies age. Bodies change. Bodies get stretch marks or have scars or are left with excess skin after massive weight loss or a hundred other things, and that is OK. It is not somehow obscene to have a body that isn't "perfect" by someone else's arbitrary standards.

In other words, Rachel Hollis and all the other mothers who bare their stretch marks proudly are awesome. Keep it up, ladies!

More like this
Black Women's Equal Pay Day Highlights An Upsetting Problem
By Brandi Neal
Help! I'm Not Getting Any Attention On Dating Apps. What Can I Do?
By Sophia Benoit
The 12 Best Strapless Bras That Won’t Slip & Fall Down
By Audrey Williams and BDG Commerce
Berriez Founder Emma Zack On Her Size Inclusive NYFW Show
By Dominique Norman
Get Even More From Bustle — Sign Up For The Newsletter