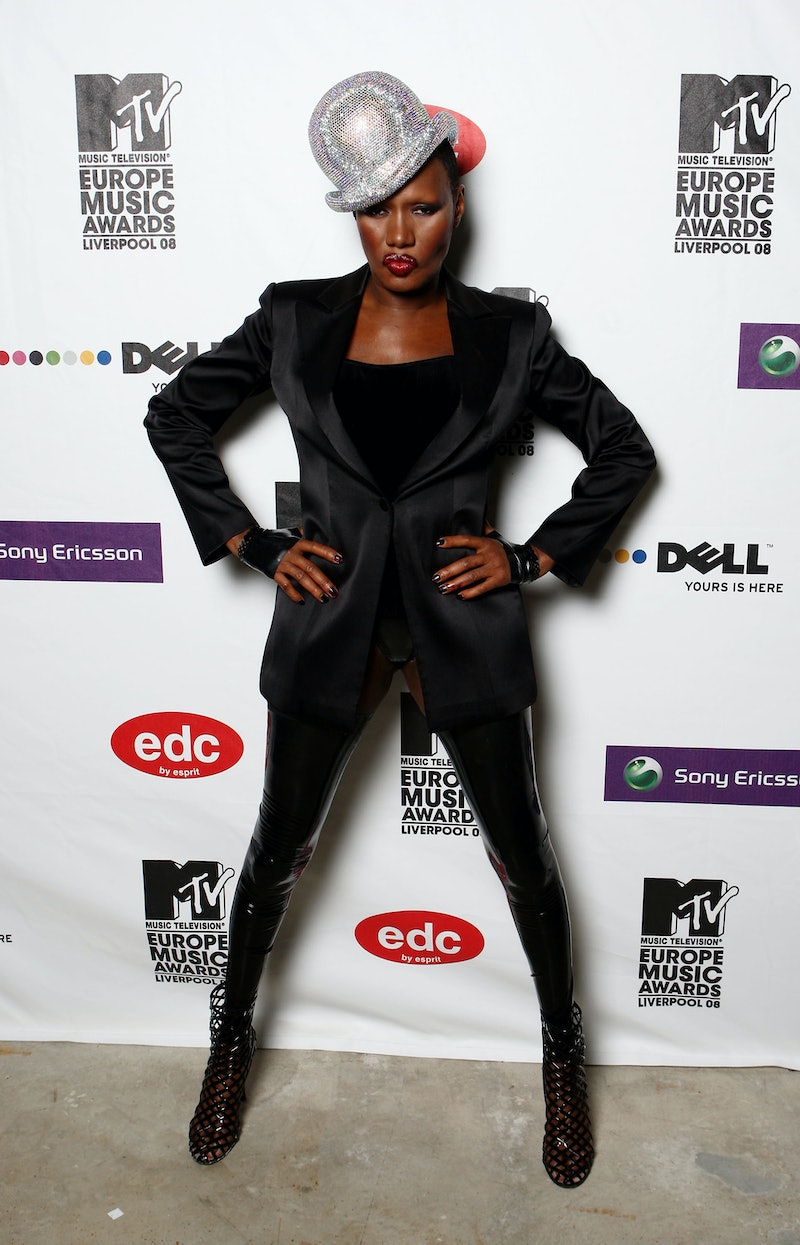 Well, it's finally happening! Grace Jones is getting a documentary, and it's well-deserved. There are reasons why certain people become fashion icons. It has nothing to do with an unprecedented knowledge of the latest runway shows or even a desire to be involved in the industry at large. Rather, they make their impact felt with an unapologetic persona that influences fashion for years to come. Such is the case of Jones who, has inspired everything from editorials to fashion collections.

The documentary, which will premiere on BBC, has reportedly been in the works for seven years and is being directed by Sophie Fiennes. The announcement of the doc comes in light of BBC Films' 25th anniversary on Wednesday. According to Dazed, the film will encompass "a multi-narrative journey through the private and public realms of the legendary singer and performer."

Jones' long and storied career in modeling and music has undoubtedly held a powerful influence on the contemporary fashion industry. She's worked with major fashion houses such as Yves Saint Laurent, Kenzo Takada, and Azzedine Alaia; appeared on the covers of major fashion publications, such as Elle and Vogue; and befriended some of fashion's top players such as Karl Lagerfeld. Next month, the style icon will turn 67 years old, and just in case you were wondering, she still SLAYS.

There have been plenty of documentaries produced about style icons, from Princess Diana to Audrey Hepburn and several in between, so there's no wonder fashion fans are excited about the Jones documentary. The long overdue project makes one wonder what other style icons are deserving of the same honor. Ranked in no specific order, here are a few.

It's no doubt that SJP's on-screen style in Sex and The City is just as inspiring as her style in real life. While Parker has already dabbled in the documentary world (in 2013 she produced a doc on New York City ballet), it wouldn't hurt to get the camera rolling on Parker herself. Seriously, we're all dying to see her closet.

Perhaps the first FLOTUS to be noted for her fashion sensibility since Jackie Onassis Kennedy, Michelle Obama keeps everyone on their toes with her stunning looks. I'd love a peek inside how she has shaped her style over the years as a woman in power.

Sure there are films rumored to greatly resemble Ross' life, such as Dreamgirls, but there has yet to be a full documentary on the devastating diva that exuded a great deal of glamour during her time at the top of the music industry. Also, Ross was a fashion designer herself.

The true queen of consistency, we really must know how Jenna Lyons does it. From being the face of J. Crew to always stunning on the red carpet with her minimalist looks, we want a documentary so Lyons can simply teach us her ways.

From her editorials that often err on the side of a discomfort that's oddly beautiful and majestic, to her androgynous looks on the red carpet, Tilda Swinton definitely has an interesting perspective when it comes to style and fashion.