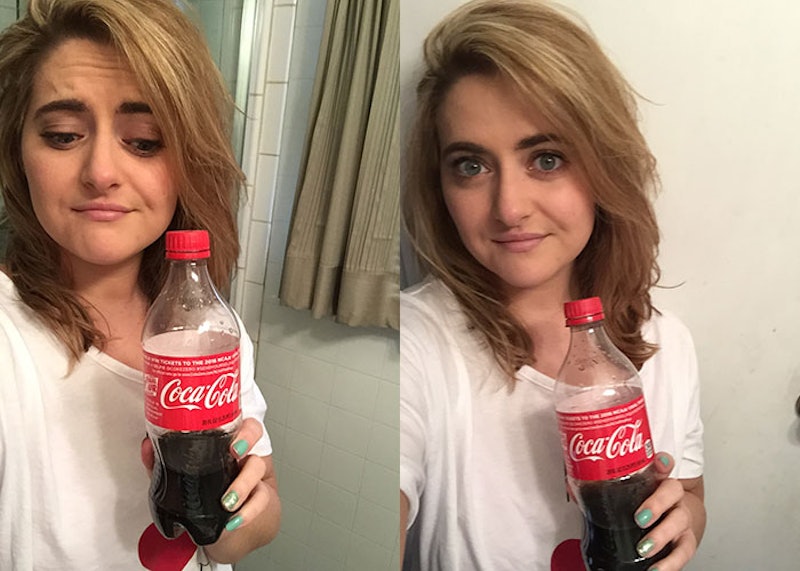 Suki Waterhouse is a gorgeous model who has worked for the likes of Burberry, H&M, and Vogue, boosts acting credits in Insurgent, is close friends with celebrities Cara Delevigne and Selena Gomez, and can even brag about dating Bradley Cooper. So if you asked me if I would take beauty advice from her, my automatic response would be, "Um, hell yes." That is, until I heard her actual beauty advice: rinsing your hair with Coca Cola.

In a recent interview with Us Weekly, Waterhouse revealed that she uses soda in an unconventional way — she washes her hair with it. No, really. She said, "I rinse my hair with Coca-Cola sometimes. I don't like my hair when it's washed — it's fine and limp — but Coca-Cola makes it tousled, like I've gone through the Amazon or something."

So, I obviously had to find out for myself. I'm not afraid of trying out different beauty experiments, and I'm down to try anything that might make my hair look like effortless supermodel hair. Plus, to be honest, it seemed like fun.

Before I ran out to buy my bottle of Coca-Cola, I did a little research on the Internet. As it turns out, rinsing with Coca-Cola is not as uncommon as you would think it is. Several beauty blogs discussed the benefits of washing your hair with soda years before Suki Waterhouse ever mentioned it. Bloggers wrote about how the soda can not only help define waves, but also make hair softer and full of volume and body.

HairFinder.com says that Coca-Cola doesn't add curl to your hair, but rather defines the natural curls or wave.

Coca Cola contains phosphoric acid. This means that the solution of Coca Cola has a very low pH level (Coca Cola Classic has a pH of 2.5). As an acidic solution, when applied to the hair, it causes the cuticle of the hair to contract (or tighten) and will make the hair appear smoother and shinier. This also means that the hair (particularly hair prone to curl) will have its natural curl enhanced.

I was intrigued, to say the least, and decided I absolutely had to try it. I'm down for anything that might give my hair more volume while also defining my natural texture.

Before we get into the experiment, here's a little background: I currently have a medium-length cut with a decent amount of layers, and I get blonde highlights on a regular basis (so as much as I try to take care of my hair, it's a little on the dry side). My hair has a natural wave to it that can turn into very pretty curls when met with the right conditions — specific products, saltwater, humidity, etc. Letting my hair dry naturally with no product is something I don't do very often because it tends to look frizzy and wavy in a way I'm not that into. I wouldn't say my hair is thick, but it's not thin either — it's in-between, and tends to fall flat at the roots, so I'm always on the lookout for volume boosters.

Here's a picture of my hair on an exceptionally good hair day for comparison, after I curled it with a wand:

Onto the experiment. I spent my Friday night buying a 20oz bottle of Coca-Cola, then heading into the shower to see what would happen. My Internet research told me that I should use the soda rinse in place of both shampoo and conditioner, so that's what I did. I made the mistake of using a bottle straight of the fridge, so it was a freezing cold rinse. Having experienced a cold Coke shower, I recommending letting your soda thaw a bit.

Although the Coke smelled like, well, Coke, while I initially washed my hair, the smell quickly went away as I rinsed it out. I stood under the water for a good five or six minutes, because my hair felt hard, like I really, really needed to put conditioner in it. I resisted the urge and got out. I wrapped it in a t-shirt to dry, added zero products, and snapped this very attractive picture.

As my hair dried, it felt clumpy and kind of hard. Really, it basically felt the way I expected hair to feel after dumping 20oz of Coca-Cola on it.

I let my hair dry on its own for a while. Since my hair has its best natural curl when I don't brush it, I just quickly ran a wide-tooth comb through the top of my head. I didn't add any product to it, because I wanted to see what the soda would do on its own. I then found out that that night was, of course, the night I had to meet my boyfriend's older brother and his new girlfriend, so I decided I had to do something to salvage things.

I twisted my hair loosely and let it sit for a little while, then flipped my head over and blasted the roots with a blow-dryer for about two minutes. By the time I was done, my hair had TONS of body and volume. Too much, actually. It was also full of fly-aways, which wasn't surprising to me — my hair gets like that without product.

Other beauty bloggers raved about how soft their hair felt from the Coca-Cola. Mine was kind of soft, but I didn't feel too much of a difference from my normal texture. It felt more like Suki Waterhouse had described it — tousled, almost like I had just gotten home from the beach. Unfortunately, the Coca-Cola didn't really seem to enhance my curls that much, but my hair hardly looked bad. Here's what it looked like after I dried it:

The front was super messy until I tried to calm it down a bit. My hair definitely had a bedhead look to it. Here's the view from behind.

It's definitely wavy, and the soda may have brought out more of my natural texture. It actually looked better from the back than it did from the front, so I clipped it back a little bit to show off the waves. Then I slept on it to see what would happen overnight.

But perhaps Coca-Cola is best used for same-day styling. After all, I woke up to this:

My hair was messy enough to get my brother to ask me why I hadn't brushed it yet. It felt soft, but not super soft. It did still have a lot of volume and body though, which was a definite plus. Still, I know that later tonight, I'll either have to wash it out or curl it and style it rather than leaving it natural.

Is it worth it to do a Coca-Cola rinse? It was nice to have the extra body and volume, but maybe this would work better for women with curlier hair or women with fine, limp hair who are looking for more oomph. So, sure, it's worth trying, even if the look it gave me was not quite as, well, refreshing as a newly opened soda.

More like this
15 Must-Have New Beauty Launches, According To Our Editors
By Rachel Lapidos
This Week’s New Makeup Releases & More Beauty Headlines
By Audrey Noble
The Chicest ’90s Updo Hairstyles To Try
By Paris Giles
Your No-B.S. Guide To Female Pattern Hair Loss Treatments
By Parizaad Khan Sethi
Get Even More From Bustle — Sign Up For The Newsletter