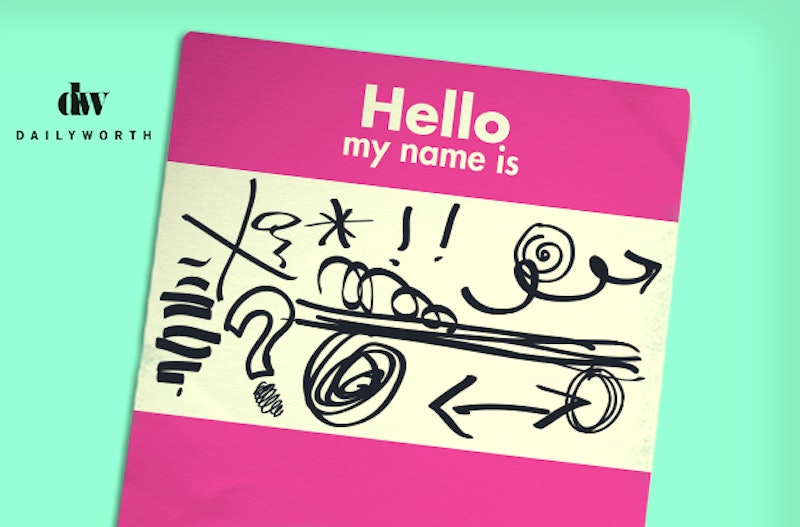 Last summer when I got married, I decided not just to change my life, but also to change my name. “New era, new identity!” I said.

The problem is, I can’t seem to get comfortable with this person whose name is on all my credit cards.

I’ve never been one to shy away from the F word. I’ve proudly called myself a feminist for as long as I can remember, and I’ve carefully shaped the life I have to reflect the basic feminist tenet that I, as a woman, am equal to men. And I’ve succeeded at that in my immediate life: I earn more than my husband (who doesn’t care), we take turns making dinner and doing the laundry, and when the snow falls, we’re both outside shoveling, as equal in our labor as we are in our crankiness.

So when the time came to decide whether I would change my name to my husband’s, I didn’t worry about what it would mean to give up my name. Concerns about subverting my identity to his — those were concerns for other women. I knew who I was: strong and independent, no matter what name I signed.

Under our weighty wedding to-do list, I forgot all about my decision until after the big day had passed. I had just begun gathering forms and ordering the required copies of my marriage certificate when the subject came up over drinks with some close female friends.

“Oh, you are changing your name!” they murmured. “I just never even thought about it when I got married. It didn’t even come up.” As I looked around the table, I realized that it was true. Eight married ladies leaned toward me — not a single name changed among them.

Over the next few days, I considered my choice. If I lived my life like a strong woman, a name shouldn’t matter — nor should the feelings of awkwardness I’d experienced when I’d reluctantly admitted to my name change to my friends.

I ran down the potential reasons I could be changing my name, trying to find the rotten egg in the bunch, and came up empty-handed. Yes, my mother did prefer that I changed my name, but no, I was not doing this for her. For someone who had strongly suspected that marriage was not even in the cards, getting married and having a fairly large wedding were sure enough punches in my heteronormativity card.

The reason I’d originally decided to change my name, which felt uncomplicated at the time, was a cultural one.

My husband and his family are Deaf, and the Deaf community is a close-knit one. At parties and events, invariably one of the first questions a new acquaintance will ask you is, “What’s your last name?” Based on that, they can figure out who you’re related to, and who you might know in common. In such a small community, establishing ties based on family connections is an important way of figuring out how you fit into the social fabric. To me, becoming a part of their family didn’t feel complete without participating in this aspect of their culture.

Intellectually, I still believe that my reason was enough.

Still, around my building, neighbors started greeting me as “Mrs. NewName” and gently teasing me about married life. And with each mention of my new name, I felt squeamish embarrassment blossom in my ribcage.

I convinced myself that I could reassert control of my identity by choosing a new middle name. I spent months trying on names and arrangements (should I use my first initial and my new middle and last names from now on?). But everything felt too precious or pretentious.

Plus, I found out that in order to change your middle name to something other than your maiden name in New York State, you have to go to court, and then pay to have your name change announced in the newspaper. The idea of having more hoops to jump through on top of the bureaucracy involved in changing my surname made me feel exhausted and defeated. Nothing about this option did anything to relieve my original anxiety, either.

In the end, even though it isn’t a pretty or particularly original option, taking my maiden name as my middle name allows to me feel like the old me is still here. I’ve taken my husband’s last name legally, though I do not use it at work.

I’m not always 100 percent comfortable with my decision, but it has prompted me to think about who I am, who I want to be, and what I need in order to feel like myself.

L.W. Northmore also changed her name for this story.

You Might Also Like:How to Create Equality in Your RelationshipWhen a Feminist Dates a Rich Guy...Down With Over-the-Top Engagements

More like this
The 19 Best Tweets & Memes About Bisexual Awareness Week
By Lexi Inks
How To Politely Reject Someone Who Keeps Asking You Out
By Laken Howard and Lexi Inks
10 Ways To Be More Empathetic To Your Partner
By Raven Ishak and Lexi Inks
Think Your Partner Is Cheating? These Tarot Cards May Confirm Your Suspicions
By Kristine Fellizar
Get Even More From Bustle — Sign Up For The Newsletter