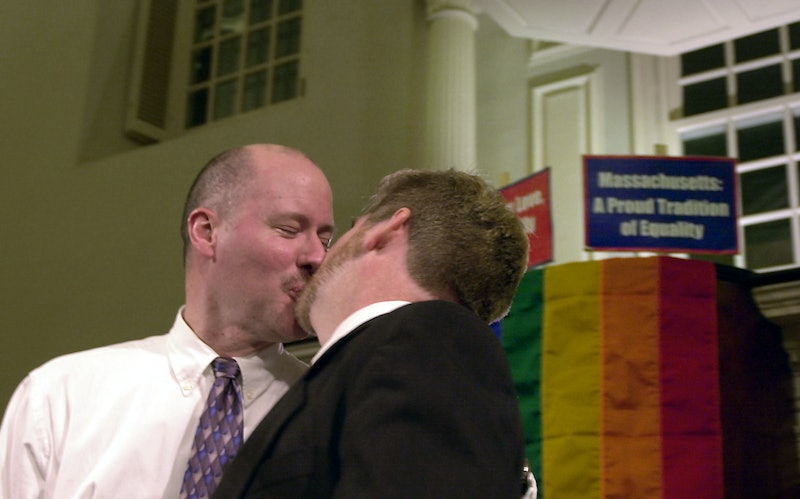 Move over, New Jersey: You've been upstaged. While gay Garden State residents began tying the knot on Monday with the blessings of their senator-elect, the state legislature, and even the reluctant acquiescence of their governor — an expected Republican presidential candidate, no less! — most LGBT Oklahomans still thought they had to board a plane to tie the knot. Because change on LGBT issues moves fast, but not that fast, and Oklahoma only removed its sodomy laws after a Supreme Court ruling forced it to do so in 2003. But one enterprising couple saw a way to tie the knot anyway, despite the state's constitutional ban on gay marriage.

Oklahoma's KOCO TV, an ABC affiliate station, reported Monday that Jason Pickel and Darren Black Bear tied the knot in the Sooner State's first legal same-sex marriage. They were, obviously, thrilled and in disbelief. "I'm not even sure how to even react," Pickel told KOCO. "I'm very excited about getting married. It's been eight and a half years."

And the best part is that the nuptials didn't involve any renegade county clerks or small-town mayors. It was all perfectly legal, because Pickel and Black Bear are both of Native American descent. It turns out that allows them to marry under tribal code, whose only two requirements are that both partners have Native ancestry and live within tribal jurisdiction. Pickel found that out when he called up the Cheyenne and Arapaho Tribe Tribes' courthouse.

"I was really expecting a big no," he said. "I thought we're on our way to Iowa, but I called the tribe and they said, 'Yeah come on down, it's twenty bucks.'"

That's because Native American tribes have a certain degree of sovereignty under United States law, including the right to make their own marriage and divorce laws. And, while there was a great deal of diversity amongst Native American tribes, for many of them homophobia was as much of a European import as smallpox blankets. Some tribes even had a revered place in the tribal hierarchy for people who existed outside the two-gender system and were sometimes called "Two-Spirit."

“I do know at the end of the day the state offices won't recognize it, but they kind of have to,” Pickel said. And he's right, they do — while Pickel and Black Bear probably won't get any in-state benefits that married couples are entitled to, they are now eligible for all sorts of federal benefits after the Supreme Court's ruling on the Defense of Marriage Act this summer. They're not the first, either: another Native same-sex couple tied the knot in Michigan in March.

According to Joe.My.God., a number of other Native American tribes recognize marriage equality:

The Coquille Indian Tribe in Oregon (2009), The Suquamish Tribe in Washington state (2011), the Little Traverse Bay Bands of Odawa Indians in Michigan (2013), The Confederated Tribes of the Colville Reservation in Washington state (2013), the Pokagon Band of PotawatomiIndians in Michigan (2013), and the Iipay Nation of Santa Ysabel in California (2013).

And check out this documentary on Two-Spirit people in Native American culture:

More like this
An Honest Review of MeUndies Boxers, According To A Non-Binary Person
By Megan Lasher
Chris Kaba's Family Continue Fight For Justice After Viewing Police Bodycam Footage
By Sophie McEvoy
Black History Month UK’s 2022 Theme Calls For Action, Not Words
By Maxine Harrison
Mel B Speaks Out Against Domestic Violence In A Powerful Speech
By Sophie McEvoy
Get Even More From Bustle — Sign Up For The Newsletter