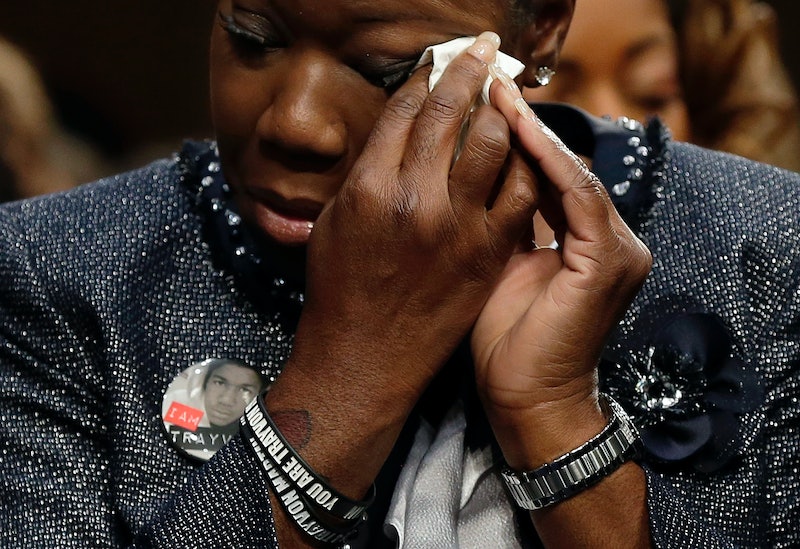 On Tuesday in Washington, D.C., Trayvon Martin's mother testified against "stand your ground" laws, saying that laws like the one in Florida make kids like her son unsafe. Sybrina Fulton, whose son died in a high-profile shooting last February, said that the law, intended for self-protection, "creates many opportunities for people to commit terrible acts of violence and evade justice." More than 20 states have "stand your ground" laws on the books, which state that a person can use deadly force to protect him or herself instead of attempting to leave a potentially dangerous situation.

“What kind of message are we sending if our kids … don’t feel safe; don’t feel safe simply walking to the store to get candy and a drink?” Fulton asked at the Senate hearing. The hearing had been scheduled to discuss the "stand your ground laws, though it's highly improbable that lawmakers will take up any legislation relating to them.

Fulton's son Martin was shot and killed on Feb. 26 last year by George Zimmerman, a member of the local neighborhood watch. Zimmerman was later acquitted of murder and manslaughter charges under Florida's "stand your ground" law, after a high-profile trial rife with racial accusations. Fulton said that Zimmerman's awareness of the stature "may have emboldened him to stalk my son, and use lethal force even in a situation where it seemed unnecessary and certainly avoidable."

The Senate hearing was led by Democrat Sen. Dick Durbin, who claimed that the laws are "diminishing accountability under the justice system." He continued: "Whatever the motivations were behind the passage of these laws, it is clear that these laws often go too far in encouraging confrontations to escalate into deadly violence."

Sen. Ted Cruz of Texas disagreed, rejecting the notion that the laws inflame racial tensions. "This is about the right of everyone to protect themselves, protect their family," Cruz said. The National Rifle Association, obviously, agreed with Cruz, and attempted to redirect the conversation. "If Sen. Durbin is truly interested in making Americans safer, he should compel Attorney General Eric Holder to testify over what Mayor Rahm Emanuel called the federal government’s ‘horrible’ effort of prosecuting criminals with firearms in Chicago — America’s murder capital in Durbin’s home state," its lobbyist said.

Though Congress is unlikely to act on the laws, the hope is that highly-publicized hearings will encourage individual states to re-evaluate their efficacy. Florida, for whom the "stand your ground" laws were particularly spotlighted during Zimmerman's trial, is set to soon tighten its own guidelines on the laws soon. The state’s Senate Judiciary Committee already passed regulations that will require local law enforcement to give firmer instructions to neighborhood watch groups, and to narrow down the incidents in which “stand your ground” laws can be used.