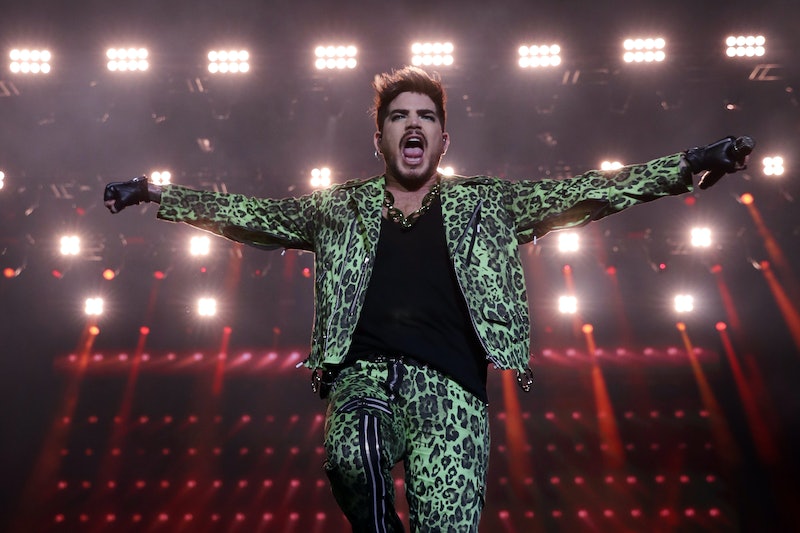 Of all the American Idol contestants who have gone on to achieve greater fame outside of the show, one of the most successful has been Adam Lambert. The singer has sold over 3 million albums in his solo career and sold out countless venues as the lead singer for the legendary rock band Queen. But now Lambert is taking on a new challenge, one that will see him using his acting skills and comedy chops instead of his considerable pipes in the new Showtime sitcom Moonbase 8. So what do we know about Adam Lambert's Moonbase 8 character?

For starters, the character constitutes Lambert's first substantial non-musical acting role, and he's confirmed to appear in just one episode. The series is about a trio of inept astronauts (comedy maestros Fred Armisen, Tim Heidecker, and John C. Reilly) who prepare for a potential moon mission at a desert outpost. Lambert shows up briefly in the trailer, looking nearly unrecognizable sans makeup and glittery stage costumes. Instead, Lambert appears in a gray T-shirt and dark hoodie, the same outfit worn by his cohorts in the scene played by Alia Shawkat and Thomas Mann. You can take a look below at the trailer, where Lambert appears around the 0:34 mark.

Along with Mann and Shawkat, Lambert plays a trainee at a separate space training facility nearby. Their outpost, which is run by SpaceX, is prepping the trio for a mission to Mars with a lot more style and competence than the lead triumvirate's NASA mission. Lambert's character is described as a "cocky Tesla employee who isn’t impressed by anything at the NASA facility," by Inverse's Nadja Sayej, who also states that Lambert "brings a burst of star power to save [the show] from any stretch of boredom."

Lambert himself spoke about the role, albeit briefly, during an Instagram Live session back in September, as reported by the fan site adam-lambert.org. Though he didn't offer any specifics on his role, Lambert did describe the show's three stars as "hilarious" and said that working on the episode was "really, really fun" and "such a treat."

More like this
'School Of Rock' Changed Joe Keery's Life Forever
By Alyssa Lapid
Everything To Know About Taylor Swift’s 10th Studio Album, 'Midnights'
By Grace Wehniainen and Jake Viswanath
Two UK Cities Are Now In The Running To Host Eurovision 2023
By Sam Ramsden and Rachel Mantock
Twitter Is Freaking Out Over Rihanna’s 2023 Super Bowl Halftime Show Announcement
By Stephanie Topacio Long
Get Even More From Bustle — Sign Up For The Newsletter