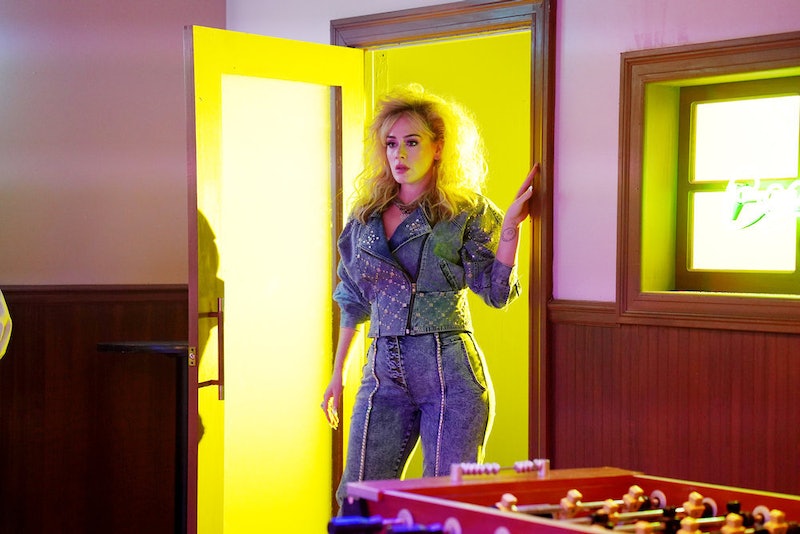 In her first set of interviews in five years, vocal goddess Adele spoke with both British Vogue and American Vogue about the heartfelt reason she decided to release her highly anticipated upcoming fourth studio album: for her 8-year-old son. Adele hopes, when he grows up into an adult, the album will give her son a glimpse into their family’s divorce from her perspective.

Adele divorced her longtime partner Simon Konecki in early 2021 after the pair originally split in 2019. The decision caused their son Angelo to ask “really good, really innocent questions” about their marriage that Adele found herself unable to answer, such as, “‘Why can’t you still live together?’” The 33-year-old added in British Vogue: “I just felt like I wanted to explain to him, through this record, when he’s in his twenties or thirties, who I am and why I voluntarily chose to dismantle his entire life in the pursuit of my own happiness. It made him really unhappy sometimes. And that’s a real wound for me that I don’t know if I’ll ever be able to heal.”

Since the divorce, Adele has gone on to date sports agent Rich Paul, but it was those initial simultaneous feelings of love and grief amid a divorce that caused her to turn to the studio as an outlet to properly work through her emotions. “I definitely feel like when my life is spiralling out of control I want to be in the studio because no one can get me,” she admitted. “I don’t have to deal with any issues, any problems. I think it’s less, ‘My world is falling apart, I need to go and write about it,’ it’s more just my safe space.”

The result is an album that, according to British Vogue, traverses an “eclectic” range of sounds and emotions that range from heartbreak to self-destruction to self-reflection. Made in collaboration with close friends including Max Martin, Inflo, Ludwig Göransson, Tobias Jesso Jr., and Greg Kurstin, who previously worked with Adele on her album 25, which won Album of the Year at the 2016 Grammy Awards. According to American Vogue, the songs each feature her original vocals from the demos of the songs so as to not lose the vulnerability and urgency they carry. “I never redo my vocals. Never. Never ever,” she said.

The “Hello” singer revealed information about several new songs from her currently untitled album. As she did not specify the track titles, nor how many songs will appear on the album, it is unclear if these are the same set of songs (outside of the ones that contain similar anecdotes and lyrics) or entirely different ones. Here’s everything we know so far.

Adele’s Upcoming Ballad “Easy On Me”

Based on the lyrics that were included in both Vogue articles, one of the songs Adele played for both publications appears to be her upcoming single “Easy On Me,” due out Oct. 15. American Vogue described the song as a “a gut-wrenching plea of a piano ballad” that features the lyrics: “Go easy on me baby / I was still a child / Didn’t get the chance to / Feel the world around me.”

British Vogue added that the opening vocals of the track came to the “Rolling in the Deep” singer while she was “singing a capella in the shower” in 2018, and that its verses reflect on her “fraught childhood, her lost marriage and the lessons learnt and unlearnt about family, love and abandonment along the way.”

A Song About “Dating Post-Marriage”

Chatting with British Vogue, Adele played another song that seemingly centers on the difficulties of “dating post-marriage.” Battling “laziness” and “opaque emotions,” the song sees Adele demand that her new partner “give her a bit more goddam respect.”

“That one is obviously about stuff that happened, but I wanted to put it on the album to show Angelo what I expect him to treat his partner like, whether it be a woman or a man or whatever,” she explained. “After going through a divorce, my requirements are sky-high. There’s a very big pair of shoes to fill.”

A Song About “Self-Reflection”

Evoking the vision of a smoky, “after-hours jazz bar,” according to British Vogue, one track is all about self-reflection. “I know how low I can go,” she croons on the song. The lyrics also state: “The road less travelled is a road best left behind.”

A Song About “Getting Drunk”

Described by British Vogue as “the most non-Adele sound yet,” the song features Adele’s voice “sampled and resampled over a hypnotic beat.” According to Adele, the song’s message comes from a place of self-destruction. “It’s me going out and getting drunk at a bar. Drinking liquor,” she said. “I start arguments if I drink liquor.”

A Song About New Love

American Vogue then described two additional tracks; one of which was a “cathartic,” “soulful” track about new love that includes Adele singing: “I just want to love you for free / Everybody wants something from me / You just want me.” The other was a “downright upbeat” tune that brought a bit of levity to the album. “Otherwise we’d all kill ourselves, wouldn’t we?” Adele said jokingly.

A Song To Connect With Her Son

With its “sexy ’70s groove,” “heavy strings,” and “heavier lyrics,” American Vogue described the next track as one that was very evocative of Marvin Gaye, whose 1971 album What’s Going On was apparently a “very big reference” on the record. The idea behind the song was spawned after Adele experienced a difficult conversation with her son. “My little love,” she reportedly sings. “I see your eyes / Widen like an ocean / When you look at me / So full of my emotions.”

Intermixed between the verses are recordings of her and Angelo’s conversations with one another, and the track apparently culminates with a “raw, teary voicemail she left for a friend.” It was a creative decision Adele reportedly made to allow fans a glimpse into her world. “I thought it might be a nice touch, seeing as everyone’s been at my door for the last 10 years, as a fan, to be like, Would you like to come in?”

American Vogue described the next track, which appears to focus on the idea of healing, as a “joyous anthem” with a gospel-infused twinge to it. The song includes Adele singing the line: “Let time be patient / Let pain be gracious.” Her own personal friends later make an appearance on the track, repeatedly singing: “Just hold on.”

“The thing that they’re all singing is what my friends used to say to me,” she shared. “That’s why I wanted them to sing it, rather than an actual choir.”

A Breakfast At Tiffany’s-Inspired Song

The last track that Adele played for both British and American Vogue is the final track on the album, a seven-minute single that was inspired by the 1961 film Breakfast At Tiffany’s. According to American Vogue, the song was “written and recorded while a TV in the studio played Breakfast at Tiffany’s on mute.” As the Audrey Hepburn-helmed film came to a close, inspiration struck. “We were trying to work out how to end the song, and I said, We should write it as if we were writing the soundtrack — you know, at the end of the movie, where it pans out,” she said.

British Vogue called the track a “string-swirling, Garland-invoking, jazzy, campy, swooning delight, packed with world-weary end-of-the-show reflection, and featuring a vocal for the ages.” American Vogue gave a sneak peek at the song’s first, absolutely devastating line: “All your expectations of my love are impossible.”

More like this
Kanye West Apologizes To Kim K "For Any Stress I Have Caused" In Rare Interview
By Jake Viswanath
Adam Levine Denies Having An Affair — But Admits He “Crossed The Line”
By Jake Viswanath and Radhika Menon
Hailey Bieber Just Responded To *That* Viral Met Gala Moment
By Radhika Menon and Sam Ramsden
Everything To Know About Taylor Swift’s 10th Studio Album, 'Midnights'
By Grace Wehniainen and Jake Viswanath
Get Even More From Bustle — Sign Up For The Newsletter