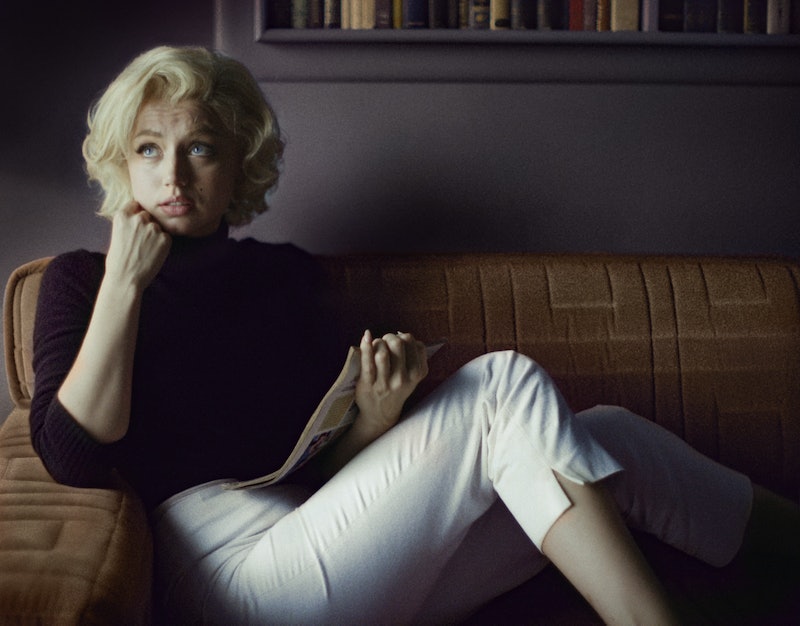 If you feel like you’ve been hearing about the Ana de Armas Marilyn Monroe movie Blonde for a long time now, well, you’re right! The Knives Out alum first joined the project back in in 2019 (an ancient time pre-Ben Affleck and the cardboard cutout saga), but the 2020 lockdown and other delays pushed Blonde back — and back again. Even writer-director Andrew Dominik joked about the prolonged rollout, recently telling Vulture that “By the time Blonde comes out, everyone’s going to be sick of talking about it.”

But that seems unlikely, given the intrigue (and controversy) that Blonde has managed to court so far. Based on Joyce Carol Oates’ 2000 novel, Netflix describes the film as a “fictional portrait” of Marilyn Monroe — and of Norma Jeane Baker, the woman before the stage name.

On his highly anticipated film, Dominik also told Vulture “there’s something in it to offend everyone.” That might factor into Blonde’s buzzy NC-17 rating, which the filmmaker elaborated upon for Netflix Queue. “I seem to get myself in these situations where people regard me as provocative, but it’s never what I’m trying to do,” he said. “I’m just trying to say it as clearly as I can. My ambition is to make you fall in love with Marilyn.”

You’ll get to decide if Dominik is successful at said mission very soon. Ahead, everything we know about Blonde so far — including its newly released trailer and fall premiere date.

Netflix dropped the Blonde trailer July 28, where Ana de Armas falls apart as Marilyn Monroe. Fans also get to see Bobby Cannavale and Adrien Brody as Monroe’s second and third husbands. Iconic scenes from Monroe’s movies, such as Some Like It Hot, The Seven Year Itch, and Gentlemen Prefer Blondes are also recreated in the black-and-white clip.

In addition to de Armas in the starring role, the Blonde cast includes Julianne Nicholson as Norma Jeane (Marilyn)’s mom, Adrien Brody as The Playwright, and Bobby Cannavale as The Ex-Athlete. Why the vague epithets? According to Netflix, the film takes “dramatic license” and features “characters who are based on historical figures as well as amalgams of people she might have known” — even though The Playwright and The Ex-Athlete are ostensibly modeled after Monroe’s IRL exes, Arthur Miller and Joe DiMaggio, respectively.

The plot of Blonde seems to be similarly experimental. As Dominik said at a 2019 Q&A, per Collider, dialogue is sparse and he “[doesn’t] think there’s a scene in Blonde that’s longer than two pages.” As the official Netflix synopsis puts it:

Blonde boldly reimagines the life of one of Hollywood's most enduring icons, Marilyn Monroe. From her volatile childhood as Norma Jeane, through her rise to stardom and romantic entanglements, Blonde blurs the lines of fact and fiction to explore the widening split between her public and private selves.

So if it wasn’t clear by now — definitely don’t go in expecting a straightforward biopic. As de Armas told Queue, “Our movie is not linear or conventional; it is meant to be a sensorial and emotional experience.”

Wondering when de Armas’ Marilyn Monroe movie comes out? Netflix just announced that the Blonde premiere date is Sept. 28 on the streaming service.

This post will be updated with additional details as more information on Blonde becomes available.

This article was originally published on June 16, 2022