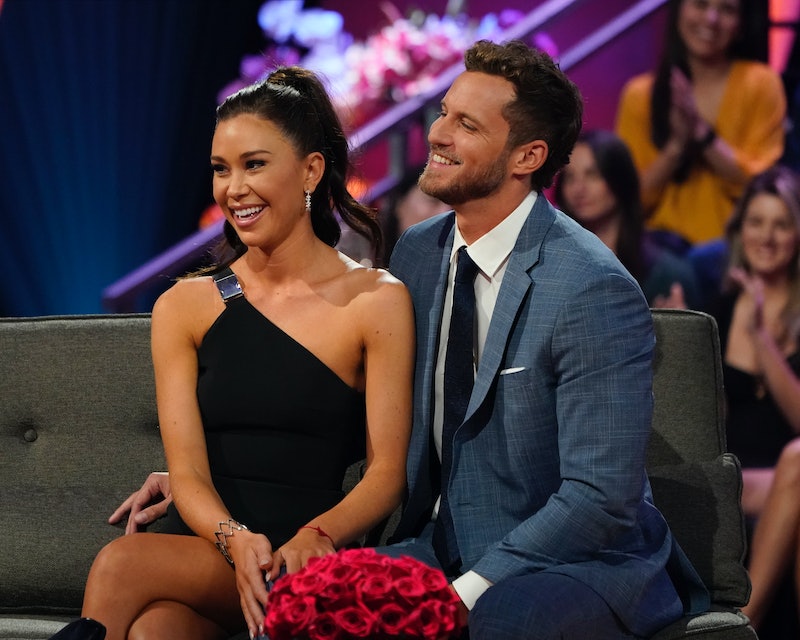 It’s been two months since viewers saw the love story between Gabby Windey and Erich Schwer unfold on The Bachelorette. Despite several obstacles (more on that later), the duo managed to come away with an engagement. Their relationship started strong, with Erich meeting everyone’s favorite senior citizen, Gabby’s Grandpa John, during their first solo outing. It wasn’t until they approached the finish line, though, that the wheels started to fall off. In the final episodes of the season, Erich expressed hesitation about getting engaged. But when it became clear that Erich was Gabby’s only option, the couple managed to persevere, and they left the show as an engaged couple.

Despite their happy ending, Gabby seemed to suggest there was some distance between the couple during a Dancing with the Stars interview with Fox News, which was posted on Nov. 1. “Life is just really busy for the both of us right now, so I understand their concern,” she said, when asked whether she and Erich were still together. “But we’re just kind of, you know, going forward with each of our individual interests and supporting each other from afar.”

While it wasn’t a confirmation, it definitely didn’t sound great for the newly engaged couple. Several days later, on Nov. 4, E! News reported that Gabby and Erich, indeed, broke up — citing a Bachelor Nation source who explained Gabby made the decision this week. “She felt they weren’t aligned and weren’t on the same page,” they said. “Gabby was hoping they could give each other space and work it out but ultimately decided they didn't have a future.”

Gabby later confirmed the split on Dancing with the Stars, saying she and Erich “weren’t each other’s best match,” and that they “weren’t completely in step and in sync with each other on [their] common goals or just the way [they] approach life.”

Erich voiced similar sentiments on his Instagram story, per The Hollywood Reporter. “The reality is that we ultimately were not each other’s people — it’s hard when there isn’t one thing to put your finger on,” he said. “We met in a very unique situation and in a very unique way and I’m grateful we did. I would never take it back.”

If you’ve been keeping up with Gabby and Erich’s relationship this far, of course, you know that their romance has been bumpy from the start. During After the Final Rose on Sept. 20, for example, host Jesse Palmer referenced text messages that had been made public — texts that Erich sent to a woman he had been dating days before leaving for the show.

The texts in question were made public by Erich’s ex-girlfriend and included some pretty damning information in the wake of his engagement to Gabby. On March 10, he sent her a message that read, “I know this isn’t ideal, I wanted to do this to see if there was something else I could do with my life,” he wrote. “I didn’t think it would be a big deal but I understand how you feel, I’m sorry and I understand if you don’t want to see me anymore.”

His girlfriend, Amanda, responded by saying, “You just expected me to continue dating you while you go on a reality show to ‘find love,’” to which Erich responded, “It isn’t real,” adding, “I am really sorry I really didn’t think this all through… I thought we could get on the same page about this. I really didn’t mean for this to hurt you.”

According to another text exchange, Erich cited being miserable in his career and wanting a change, which is what led to his decision to go on the show. The show began filming on March 22, but shortly before he left to begin filming, he sent flowers to Amanda to make her “smile,” according to her, with a note that read “I’ll never stop thinking of you.”

On July 10, he reached out to Amanda again, stating “I am so sorry Amanda, what I did was terrible I don’t expect you to ever forgive me.” He allegedly continued, “I just want you to know I think about you all the time and you really deserve the best. I won’t ever forgive myself and I hope you find happiness and everything you deserve.”

On After The Final Rose, Erich admitted to having led on his ex-girlfriend. He went on to say that he handled the situation poorly and used his appearance on the show as a way to end his courtship with Amanda. He also stated that despite the controversy, he “wouldn’t change anything,” since it led to his relationship with Gabby.

Sitting on stage with Erich, Gabby said she’d already been made privy to the messages long before they were made public. “You were kind of an assh*le to her,” she admitted. However, she added that committing to someone for life isn’t easy. Ultimately, Erich’s steps to take responsibility for his actions were what mattered. “He’s gracious, and he’s honest, and I do believe what he says.”

The special notably did not mention a photo from Erich’s high school yearbook that resurfaced on social media, in which he appeared dressed as Jimi Hendrix for Halloween in blackface. However, Erich did address the photo on Instagram and apologized.