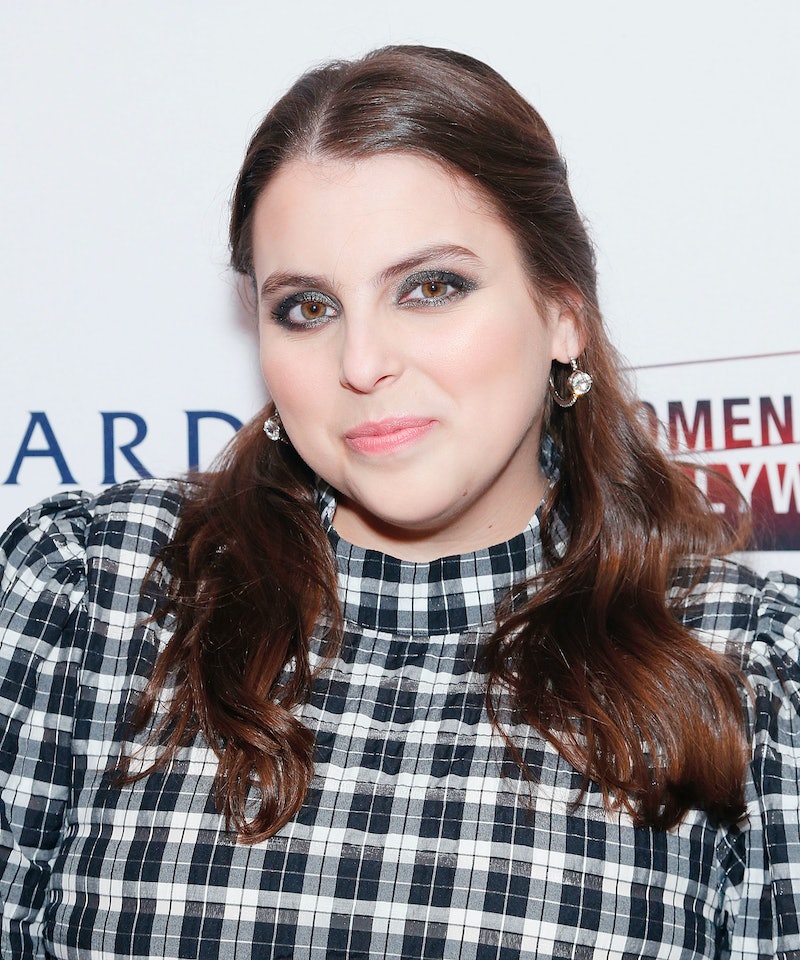 After winning over audiences with performances on stage and screen, Beanie Feldstein is set to make her publishing debut in Amy Solomon's Notes from the Bathroom Line: Humor, Art, and Low-Grade Panic from 150 of the Funniest Women in Comedy. Feldstein's Notes from the Bathroom Line excerpt tells the story of a time she "plapped" — that's a punch-slap — a homophobe during a teen tour vacation.

Since she began acting in 2002, Beanie Feldstein has amassed an impressive list of credits, including a run as Minnie Fay in the 2017 Broadway revival of Hello Dolly!, her breakout role in Ladybird, and the co-lead in Booksmart. Fans can catch Feldstein starring as Monica Lewinsky in the upcoming American Crime Story: Impeachment, and she'll voice the title character in AppleTV+'s animated Harriet the Spy adaptation.

The book isn't out until Mar. 16, but you can start reading Beanie Feldstein's excerpt from Notes from the Bathroom Line today, exclusively on Bustle.

Every great hero needs a nemesis — an adversary who pushes them to find their heroic destiny in an unexpected moment. Matilda had Trunchbull, Harry Potter had Voldemort, and I had Teen Tour Ben.

Teen Tour Ben is so named because I met him on a teen tour in the summer of 2008. If you are (very understandably) unfamiliar with what a teen tour is, it is basically a human hellscape populated by aimless teenagers who are too old for summer camp and too young to be productive members of society. They all get on a bus for a month, touring a particular region. For me, this hell was roaming the western half of the United States. This made particularly zero sense for me because I was born and raised in Los Angeles, which is famously very west.

On the first day of the tour, in Rapid City, South Dakota, we all got acquainted. There I was: a chubby, scrappy little Bean paraded in front of a sea of indistinguishable brunette boys from New York City schools. I smiled and tried to catch their names. One of them was a boy named Ben.

“Oh! Sorry Ben! I already have a very special Ben in my life! My best friend’s name is Ben,” I joked.

“Your best friend is a guy? But you’re not dating?”

Oy. Teen Tour Ben’s twisted expression sent a shiver down my American Apparel terry cloth shorts. I didn’t know what was coming but I knew that this bus was eventually not going to be big enough for the both of us. I needed to be prepared — faced with more foe than friend, where could a little Bean find her super-strength? In snacks perhaps?

So, I spent four weeks eating my way through concession stands next to major tourist spots: funnel cake at Mount Rushmore, Dippin’ Dots at the Grand Canyon, cotton candy at the Golden Gate Bridge, and even giant pretzels at the Hollywood Walk of Fame. (Literally five minutes down the street from my elementary school. WHY WAS I ON THIS TOUR?! Also, it should be noted that I am now FULLY, DEEPLY ALLERGIC TO DAIRY and it probably has something to do with this trip.)

I spent the entire trip — as I was being forced into athletic activities that were working against my mission to gain super-strength through snacking — having to listen to Teen Tour Ben’s homophobic remarks. Four weeks hearing vile and abusive rhetoric from this ignorant, pretentious boy I was stuck with. My little feminist, liberal heart was barely holding on. At this point in my life, I had not yet figured out my own sexuality and would not come to identify as queer for a decade, but acting at the time as an ally, I couldn’t handle the homophobia bouncing around the narrow walls of the sticky bus. Time was running out and snacking-strength means nothing unless you put it to good use.

Finally, it was the last night of the tour and I was fuming at TTB spewing his revolting and much-repeated catchphrases: “That’s so fucking gay bro!” and “What are you, fucking gay?” (My oh my! TTB had such a way with words!). Time was running out. He was about to get off scot-free. These weren’t even his worst offenders, but I had reached the end of my rope. I needed to act now. Luckily, that evening I had donned the perfect pajama look that eventually would come to be known as my Super Suit: boxer shorts and a shirt with bold pink lettering reading SL,UT. (Purchased in Salt Lake, Utah, obviously.)

I knew this was my moment. I marched over to TTB and, summoning my new funnel-cake-fueled strength, tipped him onto his back and pinned him down, bringing my face close to his and shouting, “STOP BEING SUCH A FUCKING ASSHOLE! NO ONE WANTS TO HEAR YOUR BULLSHIT!” and then I punched him. However, while the punch was midair I got scared that I would hurt my hand so at the last moment I opened my fist and it became a punch and a slap — it was a plap! I plapped him real good.

My snack attack did not rid the world of hate — the world is filled with Teen Tour Bens and much, much worse — but as one extremely small questionably executed moment of resistance, it felt supremely good to stand up for what I knew was right, and that feeling lives on. But every great hero story needs a lesson learned — nowadays I choose to use words instead of fists, and I’ve learned that the quest is never finished, but your tactics (and Super Suit, thank goodness) can change along the way. But don’t worry, my love of devouring snacks at national landmarks will always, always remain.

Excerpted from NOTES FROM THE BATHROOM LINE: HUMOR, ART, AND LOW-GRADE PANIC FROM 150 OF THE FUNNIEST WOMEN IN COMEDY by Amy Solomon. Copyright © 2021 by Amy Solomon. Excerpted by permission of Harper Design, a division of HarperCollins. All rights reserved. No part of this excerpt may be reproduced or reprinted without permission in writing from the publisher.