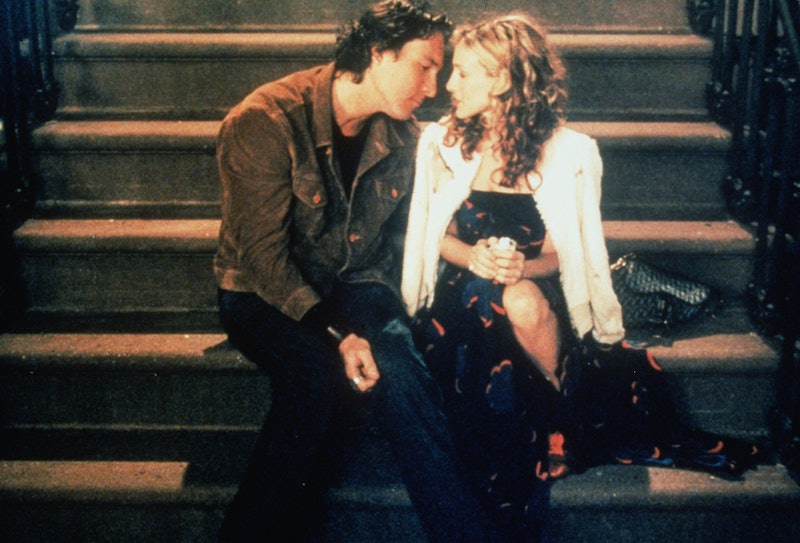 Regardless of whether Aidan was the best boyfriend for Carrie, he was the right choice for many a Sex and the City fan — and the communal crush endures. Case in point? The first photo of John Corbett on the set of And Just Like That... Season 2 received more than 1 million Instagram likes within one week. In the official snaps, Carrie and Aidan are holding hands (!!!), potentially suggesting that they are giving their rocky relationship a third try. Aidan was still a married man as of Sex and the City 2, of course, so it remains to be seen how he and Carrie get reacquainted.

Until then, why not revisit the episodes that made Aidan such a swoon-worthy love interest? Here are some of his best moments from Sex and the City’s original run.

Carrie first meets Aidan at his furniture store in Season 3, and it’s easy to see why she develops such a quick crush on him. While sporting a Canadian tuxedo (and, miraculously, looking good in it), he gently glides her hand over a leather armchair he designed: “Soft, huh?” And Carrie is immediately compelled to buy the chair (which she doesn’t need) for $2,500.

Aidan and Carrie don’t sleep together right away, which troubles Carrie. However, after a brief period of tension, Aidan draws a candle-lit bath for Carrie that she compares to a Danielle Steel novel, for no other reason than to help her relax. “This is about you,” he says. “So enjoy.” After everything Carrie had been through with Mr. Big, this kind of affection is everything.

Carrie famously struggled with Aidan’s non-toxic availability, but he didn’t hold that against her. In fact, he was cool about spending the weekend apart when Carrie said it was too soon to meet his parents, only to crash their outing after she had a change of heart. “You wanted me to be less available, so I was trying to be less available,” Aidan explains. It demonstrates the push and pull of their relationship and the space he was always more than happy to provide to help Carrie work things out.

“You Broke My Heart!”

Despite his usually calm, cool exterior, Aidan can’t hold in his emotions when Carrie tries to reunite with him in Season 4. “You broke my heart!” he cries. The agonized line delivery doesn’t just startle Carrie away — it proves the depth of how much he actually cared for her, too, and remains an unforgettable Sex and the City moment to this day.

When He Came To Miranda’s Rescue

One of Aidan’s best Sex and the City moments doesn’t actually have much to do with Carrie at all. Remember when he offered to help Miranda with her injured neck? He’s completely cool and casual about the potentially awkward situation — as Miranda wasn’t even able to get dressed from the shower before he arrived. The underrated moment serves as a reminder that Aidan isn’t just a romantic hero but a genuinely good guy you’d want in a crisis.

From the moment Aidan and Carrie gave their relationship a second chance, they were living on borrowed time. Carrie and Big’s affair (and continued friendship) would always loom over Aidan. But in Season 4, he was surprisingly game about a distraught Big crashing his country getaway with Carrie. Sure, the two do get into a Bridget Jones-esque brawl, which is interrupted by one of Carrie’s best lines ever (“Stop it! You’re middle-aged!”), but afterward, Aidan hears Big out — and they even end the trip on good terms.

When Carrie and Aidan learn to navigate sharing a home together and they’re struggling with space, Carrie requests that Aidan leave her alone for one hour every night. It seems like a tricky ask (especially given the precarious state of their relationship at this point), but Aidan immediately recognizes what Carrie needs and obliges.

Sex And The City 2

Carrie puts it best: “There, in the middle of Old Abu Dhabi, was an old love: Aidan.” For all of the second film’s faults, Aidan’s slow-mo sauntering was a pretty perfect way to reintroduce the romantic spark into Carrie’s life. Corbett has previously conceded that it was natural for Carrie to end up with Mr. Big — but now that he’s out of the picture, maybe we can expect a similar fairytale entrance in And Just Like That... Season 2.

More like this
Here’s What Happens To Bill & Frank In 'The Last Of Us' Video Game
By Brad Witter
The 'Gossip Girl' Reboot Creator Is “Looking For A New Home” To Air A Potential Season 3
By Brad Witter
'The Last Of Us' Video Game Revealed Tess’ Fate In The HBO Series
By Brad Witter
Ashton Kutcher Wants Danny Masterson “To Be Found Innocent” In Rape Retrial
By Jake Viswanath
Get Even More From Bustle — Sign Up For The Newsletter
From hair trends to relationship advice, our daily newsletter has everything you need to sound like a person who’s on TikTok, even if you aren’t.