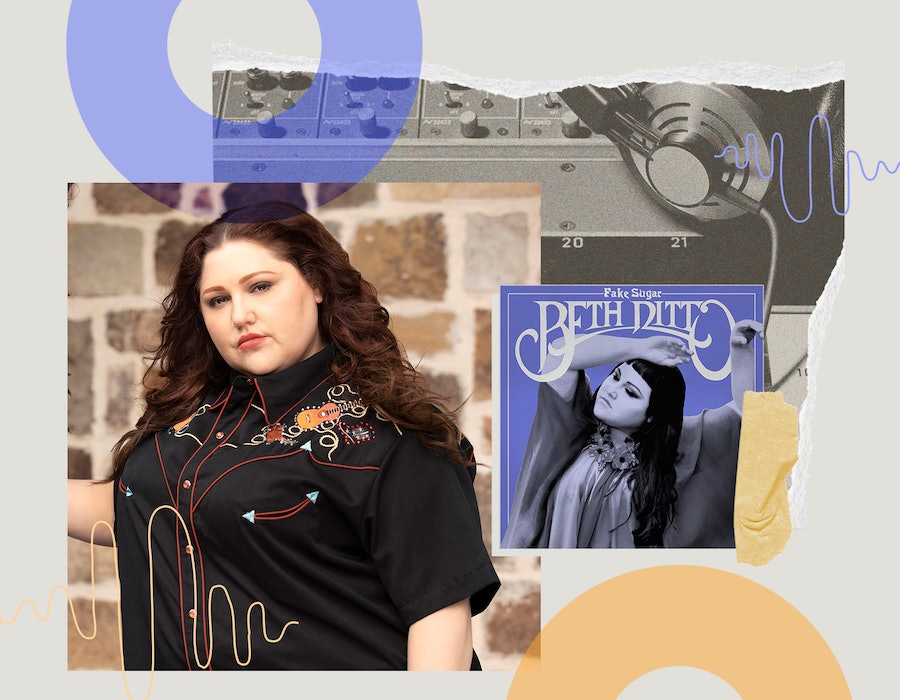 During lockdown, Beth Ditto was this close to making a complete, 180-degree pivot. She’d devoted her entire life to music, forgoing college to pound the pavement as the frontwoman of indie rock band Gossip. She’d never even held another job, outside from a stint in fast food service — hardly a career highlight. So when live shows went on an indefinite hiatus, she was left scrambling. “I was like really, really on the verge of [starting] a daycare,” Ditto tells Bustle. “I was like, okay, I could do child development, I could take those classes online. I really enjoy children. I feel like I'm at my best around children. This is something I could do.”

Luckily for Ditto fans — and perhaps unlucky for some local toddlers — she was cast in Monarch, Fox’s Susan Sarandon-led drama about a country music dynasty, just before she admitted defeat. But it’s hard to overstate how desperate she must have felt to consider any other career path: In so many ways, music is all she’s known. Her parents were music lovers (mom’s taste skewed toward Pink Floyd and Black Sabbath, while dad favored Patsy Cline and the Bee Gees), and Ditto and her siblings followed suit. Despite living in a small Arkansas town where MTV was eventually banned for not being “godly enough” — though not before Ditto could imprint on Madonna and Cyndi Lauper — her family was bohemian. When her dad ran sound at shows, she’d tag along; her older brother quit school to play drums in a band as a teenager, and she’d go with him to gigs. “My brother, like as a 15, 16-year-old, was playing with people like Little Richard and Jerry Lee Lewis, doing the casino circuit,” she recalls. “Isn't it crazy?”

Years later, Ditto would bring that same rebellious spirit to her own sound. She formed the band Gossip with her childhood friend Nathan “Brace Paine” Howdeshell, and their first few albums were released to critical acclaim. “We grew up together,” she says. “We have our own language of music that comes so easy to us together, you know, whether it's good or bad — that's a whole another thing.” More recently, Ditto has been forging a path as a solo artist. She’s released a few albums, worked on her fashion career (she’s a staple on Marc Jacobs’ runway), and dipped her toe in TV (before Monarch, she landed a recurring role in Kirsten Dunst’s acclaimed series, On Becoming a God in Central Florida). “I always compared Gossip to being in a relationship with somebody for a very long time ... then one day you turn 38 and you’re like, ‘I need to see if I can do this. I need to see if I can do this on my own. I need to know that I can be independent.’”

Turns out, she was more than capable of forging her own path — though in 2021, Ditto found herself writing songs with Howdeshell once again. She’d asked him to come help her with another solo record, and that arrangement soon became something more. “I was just like, ‘Should this be a Gossip record?’ And he was like, ‘If you want it to be.’” She did. And she wanted to get onstage again. Daycare be damned.

Below, Ditto talks about the forthcoming Gossip record, what she learned from going solo, and the merits of Reba McEntire.

On Going Solo & Learning The Ins & Outs Of Film:

How did your creative process evolve when you went solo in 2017?

The most insane part of doing something on your own — if you're just a singer like me and the only thing you can do is write melodies and sing — is you are at the mercy of everything else. You have to be open and you have to be a good listener or you can't [do it] ... So the cool thing about it was proving to myself that I could do it.

How did it feel to be collaborating again with Nathan, being back in this familiar place in an unfamiliar time?

It felt so simple, like, “Oh, yes, this is so easy.” So it was really refreshing in a way. It was good to remind myself that those connections are really important and they don't come along all the time.

What was going on in your life when you started making this new album?

We wrote the record before Roe was overturned, which is really interesting. A lot of the record was already written before all of these really, really important, horrible things happened ... Mostly it was a COVID record. We were [staying] in Hawaii, luckily for us, and then meanwhile in Portland where I live — the reputation Portland was getting, and the way Donald Trump was talking about Portland was making me so mad. I would tell people, “Oh, I live in Portland, Oregon,” and they'd be like, “Oh my gosh.” And you'd be like, “Yeah, the city is not on fire. What are you talking about?” I was really proud that this city was in the streets and not letting up, you know, especially during a pandemic. There were so many things at risk and Portland just doesn't take that sh*t lying down. And I was so proud of that. So there's some of that in the record.

You’ve made an impressive foray into acting. How has that experience been for you? Have you learned to flex new creative muscles?

First and foremost, I do not feel like an actor. I think that keeps it real. Let's keep it real, guys. Let's not get too excited. Creatively, it's really been interesting because most of the characters I've played have been Southern women who are a little quirky or something. And that's something I can definitely be, like, “Okay, I know this woman. I grew up with this woman.” But like I feel like more than anything it's been really technical stuff that I've had to learn.

Like, I remember Anna Friel, who’s in Monarch, she was like, “Okay, they said something about the master [shot]” ... I was like, “I swear to God, on my mother's life, I have no idea what [you’re] talking about ... We've been supposed to be matching the first shot this whole time?!”

What is your go-to karaoke song?

“X Factor” by Lauryn Hill is one, I love to sing that. But “Fancy” is number one — “Fancy” by Reba McEntire.

I've been trying to listen to a lot of punk music just to get like get my head out of a mainstream space ... So I'm going to say The Splits.

Was there ever a moment where you felt like you had made it as a musician?

Was there ever a moment when you considered giving up on music? If so, what got you through it?

Yes, for sure. I feel like there was a time when I was just under a lot of pressure to go on tour a lot. And basically, that made me feel like I couldn't be grounded. I couldn't be in touch with the things that I love. I'm a real homebody and I love being in my house. I want to be in my house. Like, for me, I never thought I'd even own a home, so when I was at home and in my element, I was just like, “Oh my God, my house.” Like, “I can't believe it.” And it’s funny because music is what got me the house, but I definitely was just like, “I can't keep living out of a suitcase.”

I’ve seen your craft account, @by__a__thread. What has crafting taught you?

I loved that stuff as a little girl. I loved it — embroidery, crochet, just learning to knit, punch needle, anything. I love sewing for my nieces.

Some of my favorite moments with my mom — I was really obsessed with the ‘60s. And when I was a kid, you couldn't just go buy pedal pushers. Like, I wanted to wear a bouffant, a big shirt, and capri pants. So me and my mom made a pattern and made my own pants. I love being resourceful and being like, “Okay, I can't find it. Well then, I'll make it.”

More like this
The Indigo Girls Taught Me Queer Relationships Could Be Messy, Too
By Hannah Soyer
Marcus Mumford, Open Book
By Ilana Kaplan
How The Thanksgiving Episode Of 'Gossip Girl' Changed Pop Culture History
By Gabrielle Bondi
Allie Rowbottom Will Have Her Feminism With A Side of Botox
By Samantha Leach
Get Even More From Bustle — Sign Up For The Newsletter