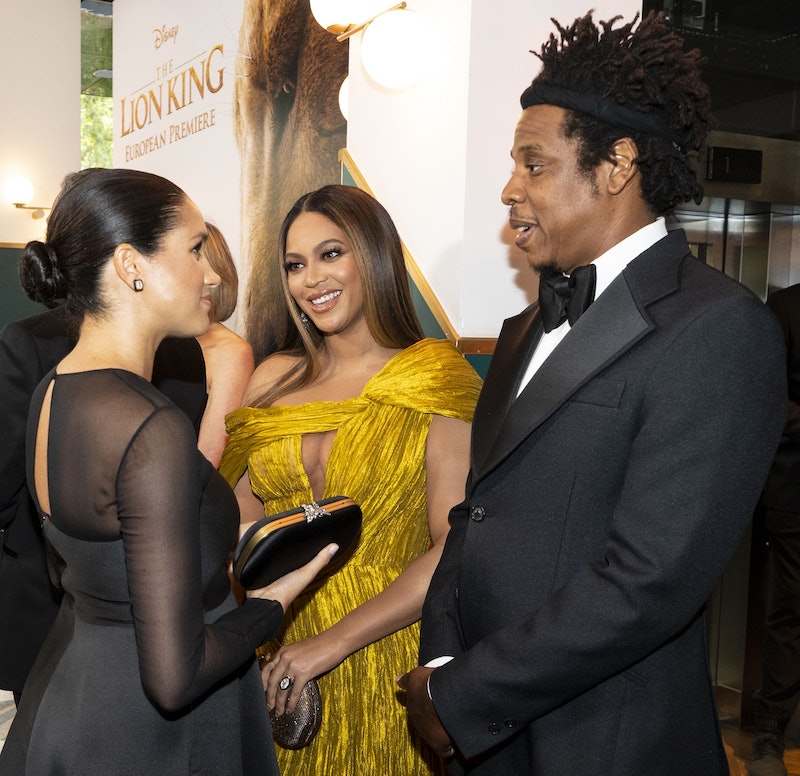 One of the U.K.’s most famous royal couples has received blessings from the U.S. Royal Family — yes, we’re talking about the Carters. Beyoncé wrote a message of support to Meghan Markle on Wednesday, March 10, following Meghan and Prince Harry’s groundbreaking interview with Oprah Winfrey, and it’s just as regal and sweet as you’d expect from Queen Bey.

Taking to her official website, Beyoncé shared a photo of herself and Meghan greeting each other at the U.K. premiere of The Lion King in July 2019, which was reportedly the first time they met in person. “Thank you Meghan for your courage and leadership,” she wrote. “We are all strengthened and inspired by you.”

According to PEOPLE, the singer greeted Meghan at the 2019 premiere by calling her “my princess” as they hugged and telling her, “We love you guys,” to which Meghan responded with a “thank you.” During the same interaction, Beyoncé’s husband, Jay-Z, congratulated Meghan and Harry on the birth of their first son Archie, who Bey said was “so beautiful.” The talks turned to Bey and Jay’s twins, Sir and Rumi, when Harry asked how they were. Beyoncé noted that the kids stayed home, but that “they would loved to have been here.” After their chat, Beyoncé told reporters that the Duke and Duchess of Sussex were “so sweet.”

Beyoncé joins a long list of celebrities who have spoken out in support of Meghan and Harry following the Oprah interview. Perhaps most notably, Meghan’s close friend Serena Williams wrote a sweet letter in the duchess’s defense, calling her a “selfless friend” and emphasizing the dangers of allowing tabloid journalism to go unchecked. “I know first hand the sexism and racism institutions and the media use to vilify women and people of color to minimize us, to break us down and demonize us,” she wrote on Twitter. “The mental health consequences of systemic oppression and victimization are devastating, isolating, and all too often lethal.”

This isn’t the first time Bey has publicly expressed her love for Meghan. At the 2019 BRIT Awards, she and Jay-Z (as The Carters) accepted the award for Best International Group in a pre-recorded speech that nods to their music video for “APESH*T.” But rather than looking at the Mona Lisa, the couple stood in front of a Queen Elizabeth-style portrait of Meghan. Perhaps Buckingham Palace can learn a lesson from the Carters.

More like this
Tyler Perry Makes Rare Comment About Meghan Markle & Prince Harry's Love Life
By Radhika Menon
Prince George Made The Cheekiest Comment About Prince William
By Sam Ramsden
Why Was Sandra Oh At The Queen's Funeral? She Represented Order Of Canada
By Radhika Menon
The Queen’s Beloved Corgis Played A Special Role At Her Windsor Service
By El Hunt
Get Even More From Bustle — Sign Up For The Newsletter