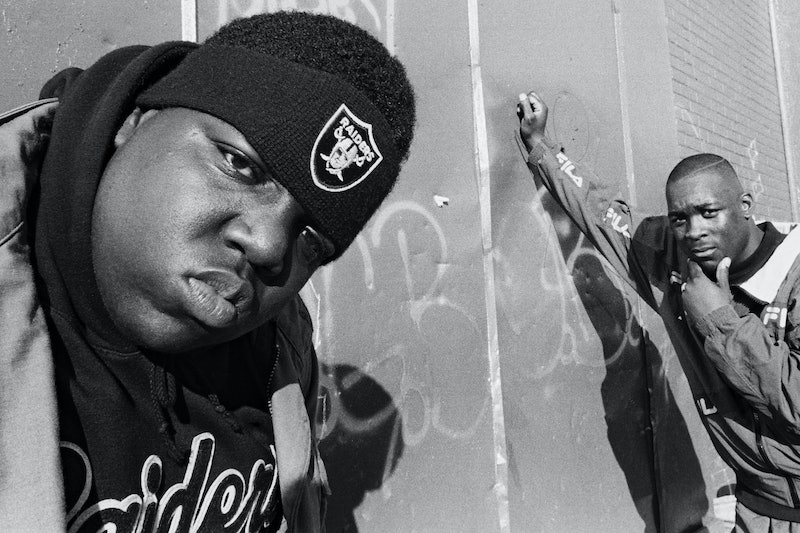 The new Netflix documentary film Biggie: I Got a Story to Tell gives one of the most intimate looks ever at the life of The Notorious B.I.G., also known as Christopher Wallace. The film — which was made in collaboration with the late rapper's estate, and counts friend and collaborator Sean Combs as a producer — features footage of Biggie Smalls filmed by his best friend, Damion “D-Roc” Butler, as well as interviews with the people who knew him best. Though he was murdered at just 24, Biggie accomplished a lot in his life, becoming not just a hip-hop icon but also the father of two young children. So where are Biggie Smalls' kids now?

Born on Aug. 8, 1993 to Biggie's ex-girlfriend Jan Jackson, the rapper's first child is T'yanna Wallace. Around the time of her first birthday, T'yanna's budding star father married R&B singer Faith Evans. Two years later on Oct. 26, 1996, Evans gave birth to Biggie's second and final child, C. J. Wallace. Just a few months later, on March 9, 1997, The Notorious B.I.G. was shot and killed while leaving a Soul Train Music Awards after-party. T'yanna was 3-and-a-half years old, while C. J. was less than five months. Neither has any memory of their father, but his friends and family have reminisced about him to his offspring extensively.

"I don't personally have memories [of him]," T'yanna told New York's Hot 97 radio station in 2014, per ontheredcarpet.com, of hearing about her dad from her mom and grandma, Evans, and Biggie's protégés in Junior M.A.F.I.A. "They have talked about him enough over time that I can basically feel like I know the stories."

T'yanna, now 27, is an entrepreneur. She is the owner and CEO of her own clothing brand called Notoriouss. The line offers women's and men's apparel, including hoodies, joggers, and T-shirts. They also sell hats, face masks, socks adorned with Biggie's face, and — quite appropriately — rolling papers. The line is quite obviously inspired by her father and is dedicated to his memory. T'yanna also recently collaborated with Wet n Wild beauty on a mascara called Big Poppa that features a sunglasses-wearing Biggie silhouette on the tube, so don't be surprised to see more Biggie-centric collabs in the future.

C. J., 24, is an actor who has appeared in a number of films, including as a young version of his father in 2009's Notorious. He doubles as an entrepreneur like his sister, having founded two companies. The first, Think BIG, is a social movement that advocates for marijuana legalization, criminal justice reform, and reinvestment in communities harmed by the War on Drugs. The second is Frank White — named for one of Biggie's aliases. Spun out of Think BIG, Frank White is a new lifestyle brand offering a selection of Biggie-inspired clothing. Both brands were borne out of C.J.'s desire to learn about, celebrate, and honor his father's legacy but have grown to be something more.

"Frank White celebrates the triumph of Black culture and creativity and honors the history of marginalized people who speak power to oppressive systems via art, music, and counter-cultures," reads the brand's heritage page.

Though his children didn't get the chance to know him, Biggie Smalls likely would have been happy to see that both T'yanna and C. J. Wallace turned out to be successful adults who are carrying on their father's legacy while also blazing their own trails.

More like this
What’s New On Netflix: Ana De Armas’ 'Blonde' & A Nick Kroll Special
By Arya Roshanian
Here’s Everything Coming To & Leaving Netflix In October
By Jake Viswanath
What’s New On Netflix: Meet 'The Real Bling Ring'
By Arya Roshanian
'Rap Sh!t' Season 2 Is Officially Happening & Will Include "More Seducing & Scheming"
By Brad Witter and Grace Wehniainen
Get Even More From Bustle — Sign Up For The Newsletter