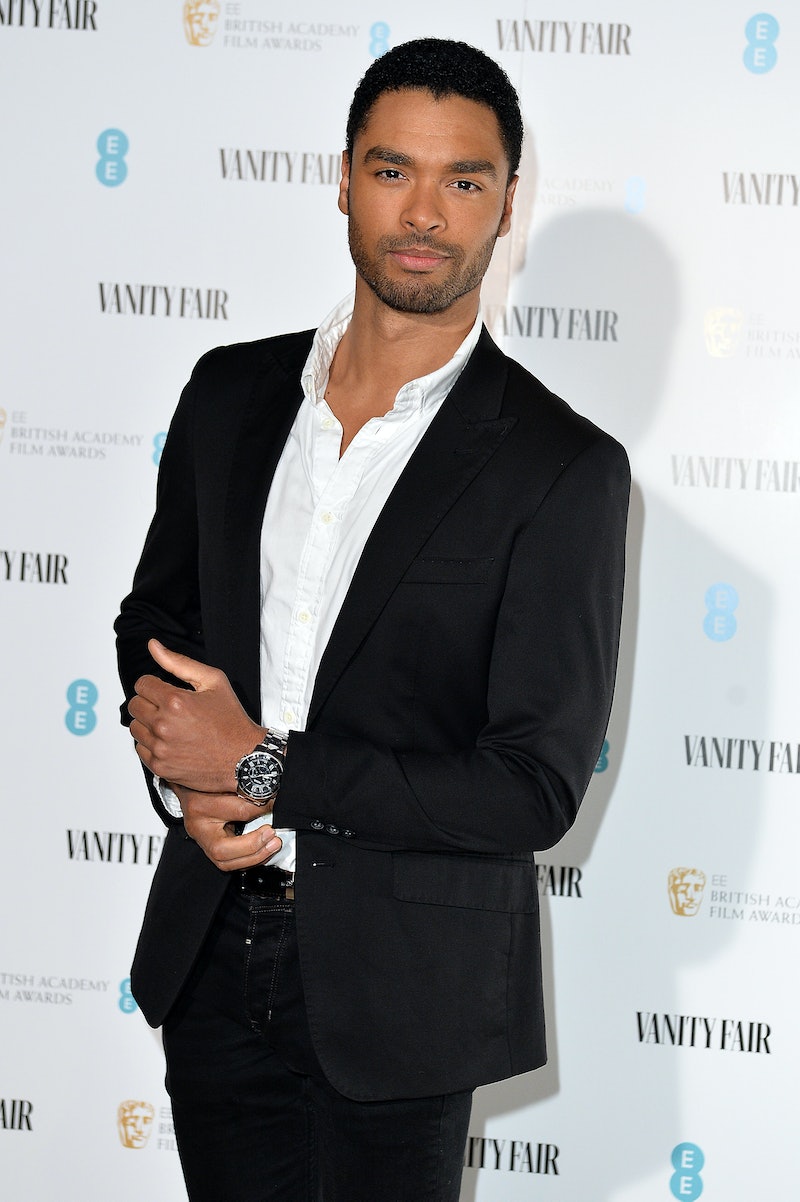 Regé-Jean Page is having a moment. Fresh from starring as Simon, the Duke of Hastings on Bridgerton (Netflix’s biggest show ever), an SNL hosting gig, and recently making the Time100 Next List, the actor is also set to star in several upcoming projects, including a Dungeons & Dragons movie and the James Bond-esque The Gray Man for Netflix.

With Page’s charm and acting chops, it is not surprising to see him dominating the entertainment scene right now. But while his star seems to have risen overnight, the reality is much more interesting, filled with a bevy of acting roles (and other surprising creative pursuits) in Hollywood and across the pond. Here is a look back at Page’s past projects, leading to his current status as duke... and a potential 007.

Page would fit perfectly in the Harry Potter universe — maybe as a dashing Death Eater or thoughtful Ravenclaw. As some seriously eagle-eyed fans found out in January, the actor did actually appear in the wizarding series in Deathly Hallows: Part 1. However, Page only played the role of an extra at Bill and Fleur’s wedding.

Page appeared in the final season of British school drama Waterloo Road as a young teacher named Guy Braxton. Incidentally, his Bridgerton love interest, Phoebe Dynevor, also starred on the show several seasons earlier, as did a slew of other famous faces.

One year after Waterloo Road, Page made his next major TV appearance — this time, as Chicken George on History’s 2016 remake of Roots. The project played an important role in Page’s career trajectory and marked the first time many American viewers likely saw the talented performer in action. As he told Harper’s Bazaar in 2016, “I've been incredibly lucky to be paired up with the best mentors anyone could ever ask for on a job like this. I'm just this kid who's wandered in with a really good imagination ... So it's a huge thrill to be in that proximity, and to be able to have them as a resource and as support and as inspiration.”

Page played Assistant United States Attorney Leonard Knox on this ABC legal drama. To the disappointment of fans, the series was canceled after two seasons — but all was not lost for Page. For the People was Page’s first time working with Shonda Rhimes, who selected the actor as her top choice to play Simon in Bridgerton a few years later.

Based on the popular sci-fi steampunk novel by Philip Reeve, 2018’s Mortal Engines saw Page portray Captain Madzimoyo Khora. Though it wasn’t quite a major role in the film, it did prove that Page could lean into fantasy worlds as easily as he could down-to-earth modern and historical settings — and that could come in handy for his upcoming Dungeons & Dragons role.

Did you know that Page is a singer, too? He is part of a musical duo with his brother, Tose Page, called TUNYA. In November, Page appeared in a short film by Lanre Malaolu set to TUNYA’s song Don’t Wait. In it, Page appears blindfolded in a boxing ring (familiar digs for Bridgerton fans) while belting out some seriously emotional lyrics.

In a post on his blog (yes, amazingly, Page is on Tumblr), the performer got real about the emotional backdrop behind the film’s production, which took place in August. “John Lewis had died. Colston was dumped in the sea, and confederate monuments were armed battle grounds - defended by white militias and conquered by Black ballerinas,” he wrote. “Chadwick Boseman died. I missed my dad. A world full of uncertainty lacked leadership and compassion, and each new week brought new, unresolvable heartbreak. The core team involved in the film had been privately trying to learn how to be grieving, vulnerable, Black and publicly on display for months, and the piece grew to reflect that.”

On the eve of Bridgerton’s highly-anticipated Christmas Day release, Page appeared in a Comic Relief sketch (aptly playing, duh, Prince Charming) alongside fellow Netflix stars like Anya Taylor-Joy and Olivia Colman. The result was fun, playful, and filled with bloopers worth revisiting long after the holidays.

As we all eagerly await Season 2 of Bridgerton, now is as good a time as any to revisit Page’s splashiest star vehicle. In an interview with NPR, Page talked about some of the things that set Simon apart from other Regency men, such as his vulnerability. “I kind of made the decision that I didn't want to lionize the brokenness of men in that type,” he said. “And so I was like, well, where are we at with discussing masculinity? How can I contribute to something of a feminist lens to this while examining the male hero in this story?”

Page also talked about embracing “the opportunity to spotlight Black joy in a period drama, which is relatively unheard of.” As if we couldn’t love the Duke of Hastings more.

Sadly, Page won’t be returning for Season 2 of Bridgerton — but as he wrote on Twitter in response to the news April 2, he’s got nothing but love for the family he developed on set, describing the experience as a “pleasure and a privilege ... on and off screen, cast, crew and incredible fans — the love is real and will just keep growing.”

Page carried over his charming, vulnerable vibes to Studio 8H for a February hosting gig on Saturday Night Live. And he really delivered, from spoofing his Bridgerton character in a smoldering monologue to embracing the emotional whiplash that is Olivia Rodrigo’s Driver’s License.

Since its premiere and incredibly warm reception, Page and his Bridgerton family made the rounds with various talk show appearances — none quite as memorable as his stop at The Drew Barrymore Show, though, where he made the host swoon and blush at the mention of “releasing that corset” of social isolation.

Barrymore also noted that the show’s sensual vibes inspired her own love life. “I got back on a dating app during Bridgerton,” she said. “I was like, ‘I’m not dead! I’m not dead!’ For me, that was a big step.”

Though release dates for Page’s upcoming projects, The Gray Man and Dungeons & Dragons, have yet to be announced, they will surely give us even more material to obsess over in the very near future — especially as we continue to reel from his absence on Bridgerton.

More like this
Nicola Coughlan Shared A Lady Whistledown Excerpt From ‘Bridgerton’ Season 3
By Grace Wehniainen, Alyssa Lapid and Sam Ramsden
'The Rings Of Power' Episode 5 May See The Realms Brought Together
By Kadin Burnett
Netflix Reveals First Look At Wednesday In The 'Addams Family' Spinoff Series
By Bustle Editors
Here’s Everything Coming To & Leaving Netflix In October
By Jake Viswanath
Get Even More From Bustle — Sign Up For The Newsletter