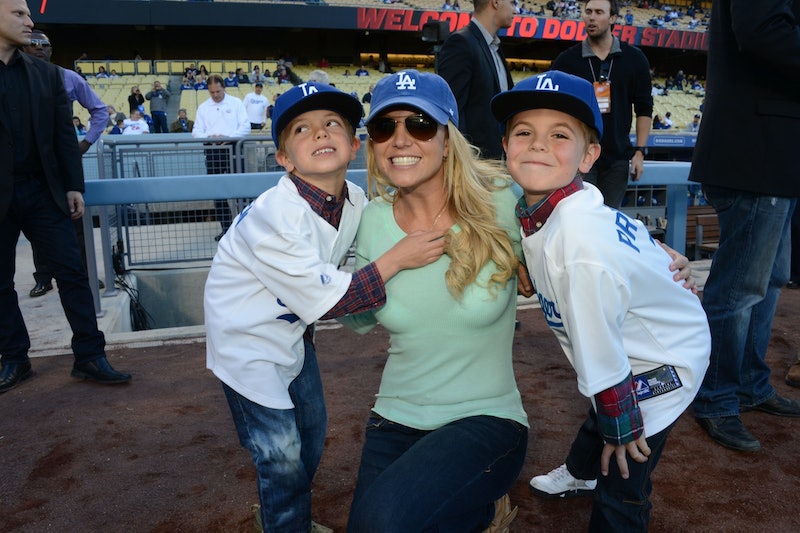 Their 2007 divorce might have marked the end of Britney Spears and Kevin Federline’s marriage — but 15 years later, the exes are still going through a bout of public family drama. It all started when Federline (aka K-Fed) gave an interview with the Daily Mail in which he claimed the teenage sons they share — Jayden and Sean Preston — “decided they are not seeing [Spears] right now,” and opted not to attend her June wedding to Sam Asghari.

Federline also said Spears’ Instagram activity was “tough” on the boys. “I try to explain to them, ‘Look, maybe that’s just another way she tries to express herself,’” he said. “But that doesn’t take away from the fact of what it does to them ... I can’t imagine how it feels to be a teenager having to go to high school.”

Spears and Asghari immediately criticized Federline’s comments on Instagram — Spears, specifically, wrote that they were “HURTFUL,” adding that “the trauma and insults that come with fame and this business not only affect me but my children as well.”

Days later, though, Federline is doubling down on the drama claims. As Page Six reports, the former dancer shared several old videos that allegedly show Spears arguing with her family — apparently unaware she’s being filmed, the outlet points out.

The Aug. 11 post (now deleted) follows Spears’ own post about the kids (also now deleted) in which she reportedly said the boys acted “hateful” toward her, per Page Six.

“I can not sit back and let my sons be accused in this way after what they’ve been through,” Federline reportedly said. “As much as it hurts us, we decided as a family to post these videos,” adding that “this isn’t even the worst of it” and “the lies have to stop.”

Spears’ attorney, Mathew Rosengart, quickly responded to the videos — which, he told Page Six, were taken when Jayden and Sean Preston were 11 and 12 years old, respectively. “Whether he realizes it or not, Mr. Federline has not only violated the privacy and dignity of the mother of his children, he has undermined his own children, whose privacy he should protect,” Rosengart said.

The attorney also described Federline’s videos as “cruel, bottom-of-the-barrel stuff,” and revealed that he’s working with Instagram to address “various legal issues” raised by the posting.

More like this
Ed Sheeran’s Surprise Gig Included An Iconic Britney Spears Tribute
By Bustle Editors and Darshita Goyal
Everything To Know About Taylor Swift’s 10th Studio Album, 'Midnights'
By Grace Wehniainen and Jake Viswanath
Lizzo Twerks While Playing James Madison's 200-Year-Old Crystal Flute Onstage
By Radhika Menon
Twitter Is Freaking Out Over Rihanna’s 2023 Super Bowl Halftime Show Announcement
By Stephanie Topacio Long
Get Even More From Bustle — Sign Up For The Newsletter