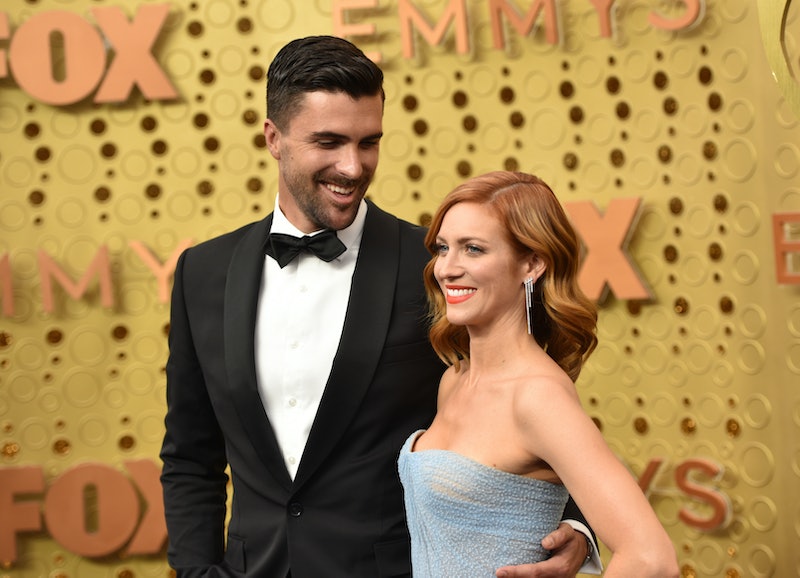 Given the Southern California locale of Selling Sunset, it makes sense that a number of celebrity guest stars would rub elbows with The Oppenheim Group: such as Modern Family’s Jesse Tyler Ferguson and Shang-Chi’s Simu Liu. But in new Netflix spinoff, Selling The OC, the Hollywood connections go even further — in fact, one realtor from the team (an expansion of the OG Oppenheim Group, the OG OG) is linked to an actor you definitely know and love.

Yes, Selling The OC’s Tyler Stanaland and Brittany Snow — whose resume includes several iconic musicals, like Pitch Perfect and Hairspray — were married for two years. Despite not appearing on the show, Snow was “supportive,” Stanaland told Entertainment Tonight. “I have what makes the most sense in my career, and she has what makes the most sense in her career, and kind of whatever is best, we do, and we support, and I think that’s what makes our relationship successful.”

However, by Sept. 14 — three weeks after Selling The OC premiered on Netflix — Snow and Stanaland’s relationship “hit the rocks,” sources told People. “Brittany never wanted Tyler on the show but he was adamant,” one source said. “He wanted to make a name for himself on his own terms.”

Another source told the magazine that Snow and Stanaland were “fully over,” pointing to attention from fans who are “obsessed” with the reality star, which has reportedly “taken a toll” on his relationship.

The same day, the couple confirmed the split with joint social media statements. “After time and consideration, Tyler and I have made the difficult decision to separate,” Snow wrote. “This decision was made with love and mutual respect for one another. We have realized we need to take some time and make sure we are each living our most fulfilling and authentic lives. We started this journey as best friends and our relationship will continue to be a priority not only for us but for our dog Charlie.”

What was the couple’s relationship like up to this point? Here’s a look back at Snow and Stanaland’s relationship timeline — from their first meeting to their separation.

The Beginning: A Mutual Crush

Stanaland and Snow had mutual friends — and mutual crushes. Snow thought the realtor was “the best-looking man ever,” she told The Knot, adding that her best friend referred to him as Snow’s “dream boyfriend who lives in Orange County” before they ever met.

Meanwhile, Stanaland was a pining Pitch Perfect fan. “I knew of Britt for obvious reasons, but she was my unattainable crush forever,” he told the site. “As a man, I used to watch Pitch Perfect with friends and, ‘Brittany Snow… one day.’ But never thinking it would ever happen.”

Eventually, though, Stanaland sent Snow a dad joke via DM — and they met up for Mexican food soonly thereafter. “We got tacos after years of being infatuated with one another and forgot how to speak entirely,” Stanaland told People. “There was a certain amount of tequila consumed, and then we just started talking a lot. Then we fell in love and nothing’s really changed, we’re still eating tacos and margaritas together.”

While it’s unclear when, exactly, Stanaland and Snow had their first taco date, they were very much “in love” by September 2018, Snow told Us Weekly at the time. “I’m very public about it for the first time in my life and that’s very strange to me,” she said. “I made a conscious decision — I’m very private and I made a conscious decision to, I don’t know, be less hard on myself.”

Stanaland and Snow got engaged a few months later — in February 2019, People reported. “A couple weeks ago, I said ‘YES’ about a million times to the man of my wildest & most beautiful dreams,” Snow wrote on her Instagram, per the outlet. Stanaland’s post was just as sweet: “You are the most beautiful, intelligent, thoughtful, caring, incredible human and I couldn’t be more excited to do life with you.”

Snow was already a parent to rescue dog Billie Jean September Snow, she told The Knot — and the pup quickly took to her new dad. “She follows Tyler everywhere and the three of us make a tight-knit little family,” she said. Billie even attended the wedding and walked down the aisle, People reports.

The couple’s wedding included tacos (a nod to their first date) and had a “very comfort food” vibe, Snow told People. In an Instagram post recapping the big day, the Someone Great star remarked upon the timing of the nuptials — which happened just before the world started locking down due to COVID. “We knew we felt incredibly lucky to have found each other but we had no idea how lucky it would be to get married right before a monumental time in our history,” she wrote.

Though the couple pledged to keep their professional lives separate, it didn’t stop Snow from reacting to her husband’s starring role on the reality series — especially when he’s involved in the most talked-about moments. In one bit, Stanaland ranked his love of surfing above his love for his wife, and Snow reportedly took that in stride. “This is a funny thing. This is such a foot-in-mouth situation, and it was meant to be a joke,” he told Us Weekly. “But no, she knows how much I love surfing, but she knows how much I care about her, my family. She wasn’t mad, but she was like, ‘You would say that.’”

Stanaland is a hot commodity on the show, with co-stars like Kayla Cardona, Alex Hall, and Polly Brindle apparently making advances on him. While Stanaland wanted to keep Snow’s initial reaction between them, he clarified that it had not caused any sort of rift or issue in their marriage. “It’s something that in a marriage — you have to have trust, especially in this space and especially hers. It’s something that we are fortunate to have,” he said.

Was Snow ever going to make an appearance on the show, though? Stanaland hinted at the possibility in future Selling The OC episodes saying, “we’ll have to see what transpires with the show.”

Ultimately, it looks like Snow will never be appearing on Selling The OC — because on Sept. 14, the couple confirmed they were separating. The announcement was made with dual black-and-white photos taken on the subway.

The exes said they had “love and mutual respect for one another,” and would still have a relationship — as they share another dog, Charlie, together.

This article was originally published on Aug. 25, 2022