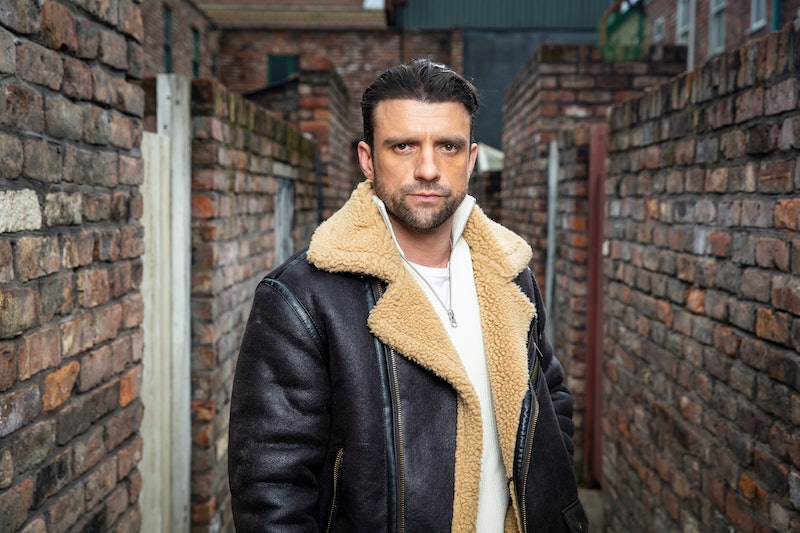 ITV soap Coronation Street always keeps things fresh by bringing in new characters and plot lines, and the latest bit of drama on Corrie will be the sudden appearance of Jacob Hay’s father, Damon. While viewers try to figure out why Jacob is so eager to get rid of his dad and why his dad in turn is so eager to support the Bistro business, no doubt many will also be interested in the actor who plays this new character. So who is Ciarán Griffiths and what do we know about him outside of Weatherfield?

Manchester-born Ciarán Griffiths started his acting career young, starring in children’s drama series Children’s Ward, aged just 13 years old. Over the years, the 39-year-old also appeared in numerous soaps and television series such as City Road, The Bill, Holby City, Waterloo Road, and EastEnders. But Griffiths is perhaps best known for playing gay gangster Mickey Maguire in the comedy drama Shameless, which he had starred in from 2007 to 2012 — a role for which he was regularly heckled. As told to the Daily Star, this trouble used to come mainly from inebriated youngsters. “One lad will say, ‘I have to ask this question’ and he’ll get all his mates’ attention and say, ‘Are you gay?’ They all fall about laughing but I generally reply, ‘Ask your dad!’”

Griffiths has also starred in several movies, most notably Svengali, alongside Martin Freeman, Jonny Owen, Vicky McClure, and Maxine Peake. And it’s not just the screen he’s comfortable with but also the stage, appearing in historical stage romance All I See Is You in 2018, a production depicting a gay relationship in the ‘60s.

Interestingly, this is not actually Griffiths’ first time on Coronation Street. Way back in 2000, he had already guest starred as Dean Sykes in four episodes. Per the Mirror, he said of his new Corrie role: “I’m happy to be back in Manchester to see my family and friends after being away in Australia for the last three years. The city has changed so much! And what better way to tie it in with a stint on the Cobbles.”

Griffiths can be found on Instagram at @ciarangriff83, but his account is private, so fans will unfortunately have to get their dose of him straight from the telly. Coronation Street airs on ITV on Mondays, Wednesdays, and Fridays. Griffith’s character Damon Hay will appear on the show from December 2022.

More like this
Turns Out George Clooney Is A Huge Fan Of This Classic British Game Show
By El Hunt
Everything To Know About The 'Daisy Jones & The Six' TV Series
By Maxine Harrison and Brad Witter
Adam Ali Hopes 'Waterloo Road' Will “Subvert” Queer Misconceptions
By Sam Ramsden
Laura Anderson Pulled The Ultimate Girl Power After Her Break-Up
By El Hunt and Megan C. Hills
Get The Very Best Of Bustle/UK
Sign up for Bustle UK's twice-weekly newsletter, featuring the latest must-watch TV, moving personal stories, and expert advice on the hottest viral buys.