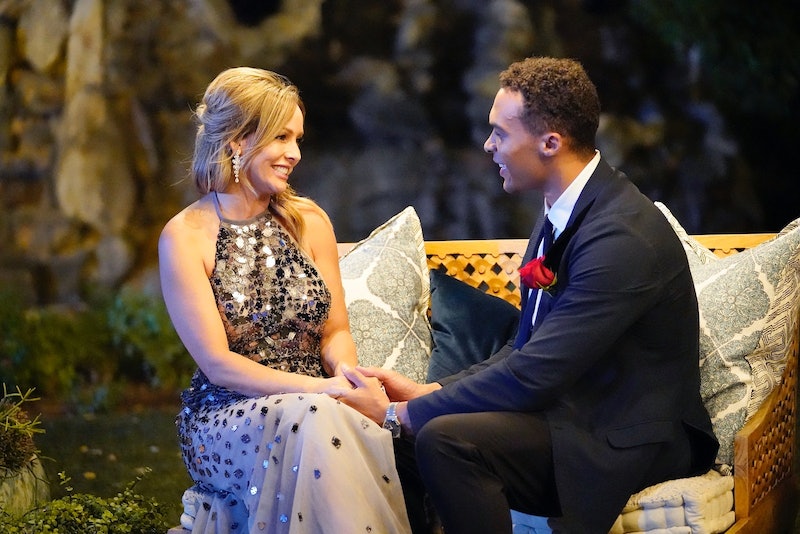 It hasn't even been a full day since their whirlwind engagement aired, and the newest Bachelorette couple is already planning their next step. While talking to fans on Instagram Live following the hit reality show's Nov. 5 episode, Clare Crawley and Dale Moss revealed they've already begun house hunting. The couple — who had quite possibly the fastest love story in Bachelor history — also said that they've been dying to share the news of their engagement with fans since they stopped filming in August.

"We're going to enjoy this moment. We've been waiting a long time," Dale said, a sentiment that his fiancée echoed. "We've waited three months to share this with you guys," she added before teasing that they've fallen even harder for each other since production wrapped. "We actually have been hanging out a lot. We spent so much time together," Clare said. "We've been hanging out for the last week together, just this time, but we see each other all the time."

Soon, however, the pair intends to make things a little more permanent. "The great thing about all of this is, you know, we've already been looking [for a home together] and we have the ability to be any and everywhere we want to be," Dale said when a fan asked if they would continue the relationship long-distance. "We went house hunting the other day," Clare added, confirming their plans to move in together.

During the IG Live, Clare appeared to address the backlash she received on social media because of her instant infatuation with the football player-turned-model. "For some reason... there has been some crazy energy going on with people that just are... the amount of hate, you guys, is insane," she said. Still, she was sure to thank the viewers that have been supportive of their love story. "I'm just so happy to share this with you guys. You guys have been along on this ride for so long."

The fans who celebrated their engagement on social media will be happy to know that their bond has only gotten stronger since leaving the show. "This is the happiest time in my life. Everything [since] has been even more reaffirming of why I chose him," she told People after the proposal aired. "What I'm learning is that he's the yin to my yang. I've got this passionate side of me, and he just levels me out ... I've waited a long time to finally find this. And it was worth it."

Once the news of their engagement went public, the couple celebrated on their respective social media platforms. "Never a point [where] I won't show up for you," Dale wrote alongside a slideshow of pictures from their big moment. Clare shared a goofy video of her new fiancé kissing her cheek on her Instagram Story. "My love!" she captioned the clip, which appeared to have been taken shortly after Dale popped the question.

The former Bachelorette shared a celebratory post on her feed as well, which included photos of Dale down on one knee and a snapshot from their romantic one-on-one date. "It's official!! Love wins!!!!" Clare wrote. "I love you [Dale]!!!!" Next step? A house for the happy couple — and maybe even a grand, romantic Bachelorette wedding.

More like this
Kim Kardashian Reveals Her Response To Kanye’s Fashion Opinions
By Jake Viswanath
Bachelorette Gabby Kissed Her New Fiancé On 'Dancing With The Stars'
By Jake Viswanath
Where Is Former Bachelor Host Chris Harrison Now & What Is His Net Worth?
By Hugh McIntyre
Everything To Remember About Lace Morris Before 'Bachelor In Paradise' Season 8
By Grace Wehniainen
Get Even More From Bustle — Sign Up For The Newsletter