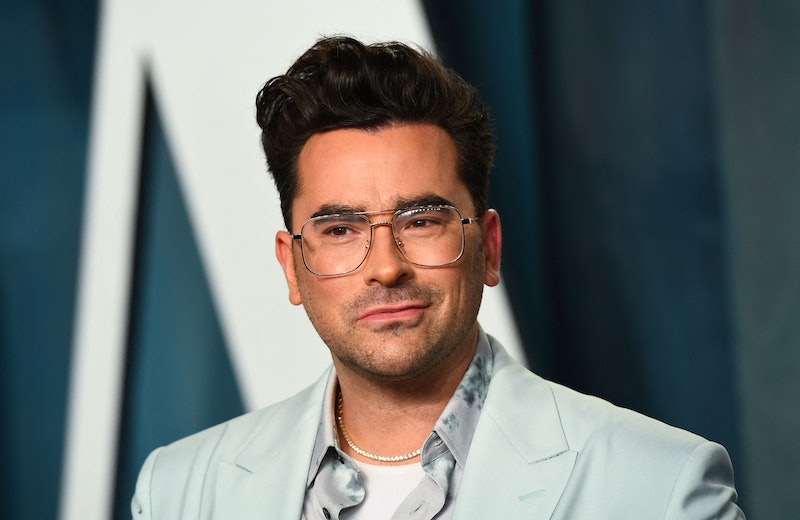 Like Beyoncé, Schitt’s Creek’s David Rose excels as a solo artist, but in real life, Dan Levy lets his whole clique snap with him. While vacationing in Italy, Levy and several friends staged an impromptu poolside runway show — set to Beyoncé’s “Break My Soul,” of course — to show off his DL Eyewear line. In his July 2 Instagram video, which was shot by Salvatore Antonio (aka shady David Rose imitator Antonio from Schitt’s Creek Season 5’s “Roadkill” episode), the actor, along with pals Trevor Ballin and Michael Rider, show off their best runway struts — all while giving loungewear a new meaning with, uh, outdoor furniture cushions as accessories. “Moore frame shown three ways via Sun Bed Printemps/Eté 23,” Levy captioned the post.

Though his character on the CBC and Pop TV comedy was known, in part, for his unique personal style, Levy’s eyewear brand, which he relaunched in Spring 2020, pre-dated the show by several years. “The last thing I wanted was for anyone to think, ‘Oh well, he had a successful show. And now he’s doing the line of glasses,’” Levy told Bustle in June 2021, noting that he “had the line long before I started Schitt’s Creek.” (In fact, as Moira Rose, Catherine O’Hara did wear D.L. Eyewear’s Rose glasses on the show.)

Having worn glasses since he was 8 years old, the four-time Emmy winner learned at an early age that eyewear can be a form of self-expression, something he’s experimented with for decades. As Levy’s star began rising, young fans began asking where he got his glasses from, and the actor felt “oddly uncomfortable” telling a teen to go spend $500 on designer versions like he was wearing. Realizing that he “might have something to say in the eyewear space,” DL Eyewear was born. (Most styles currently cost about $150.) “As someone who’s worn glasses since I was in the third grade, I know what I like, I know what works, I know what doesn’t work, and I know what I want,” he added. The native Canadian even once got a marketing assist from dad Eugene Levy, who handed out frames to Toronto Blue Jays players.

As the younger Levy explained in an April 2021 GQ interview, fashion, specifically eyewear, is probably his “favorite form of self-expression” — even if that’s “only because [he’s] been sort of forced into it.” His company motto? “See with love,” which is inscribed in every frame. “It’s really about continuing on with the philosophy that I started the company with, which was to make people feel good,” he told the magazine, citing versatility and a “reasonable price.”

Given the brand’s popularity, Levy certainly didn’t need to stage that fashion show, but fans certainly seem happy that he did.