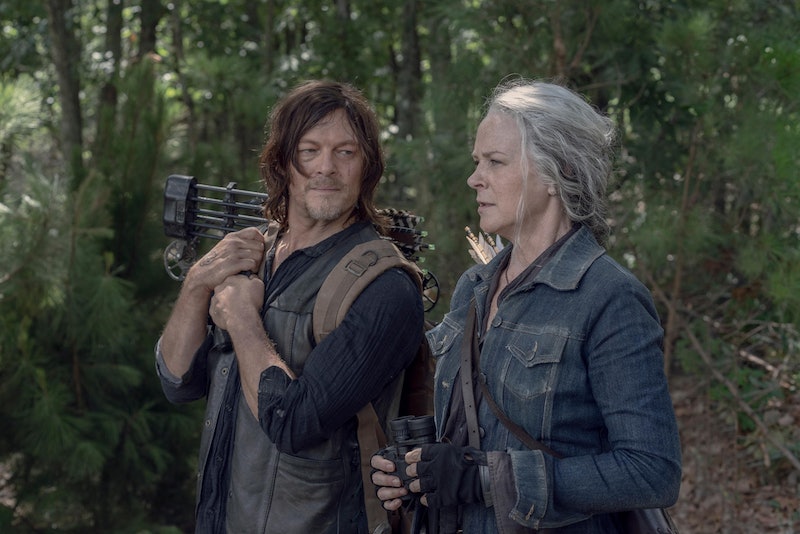 What's up with Daryl and Carol? In a teaser for the next episode of The Walking Dead, "Find Me," the best friends seem to be fighting — or at the very least, still experiencing some tension over Carol's handling of the Alpha situation.

While they will definitely have to work out some past slights, viewers can rest assured that this fight won't break Daryl and Carol's close friendship — not just because they are starring in an upcoming Walking Dead spinoff together, but because we've already seen them go through highs and very low lows before, and they've always come out OK.

As we anxiously wait for them to patch things up (and maybe ride off into the sunset together), here are five especially memorable moments from the course of their decade-long friendship.

Sophia and The Cherokee Rose

Season 2, Episodes 4 and 7, "Cherokee Rose" and "Pretty Much Dead Already"

The whole Sophia saga was an important plot-driver for Rick and the survivors in the early days of the show, as the search for her eventually linked them to the Greene family farm. But on an emotional level, no one evolved more than Daryl and Carol. At this point, they weren't even friends and Daryl was still extra rough around the edges — but he believed they'd find Sophia when no one, not even Carol, shared his hope.

Daryl even brought Carol a flower (a Cherokee rose, named for the mothers who lost their children on the Trail of Tears, he explained) to help raise her spirits. When Sophia ultimately returned in walker form, Daryl was the first to embrace Carol to try to protect her from the horror at hand. All in all, not a particularly fun friendship moment, but one that proved foundational to their journey down the line.

Despite all the serious stuff they've been through together, Daryl and Carol have shared plenty of lighter moments, too. During the prison's short-lived tenure as a relatively safe, makeshift community, Daryl seemed to be popular among the new neighbors. Like any good friend, Carol was there to jokingly knock him down a peg — "just so you know, I liked you first" — and tell him "sorry, Pookie" (to which he responded with a friendly shove) when going over walker plans, establishing the friends as a close, playful pair.

After the prison fell and the survivors broke into mini sub-groups (not knowing whether their friends and family were even still alive), Daryl was among those who suffered the most — developing a close friendship with Beth, then losing her and living quietly with that guilt.

So it was especially emotional to see Daryl reunite with Carol after she surprised everyone by saving them at Terminus. Finally free of some weight, Daryl ran up to his friend, broke down, and gave her an enormous hug, a heartfelt moment that didn't need words to be understood.

"Should We Have Matching Bracelets Now?"

It wasn't until Season 10 that Daryl decided to make things official, telling Carol, "Sorry if I didn't want my best friend to spend her whole life on a boat." Carol, of course, teased Daryl about the acknowledgement, asking if they needed to make matching friendship bracelets now. (Of course, her very on-brand reaction was confirmation alone that things were as cool between them as ever.)

They also joked about riding off together to New Mexico, long before their spinoff series was ever announced.

Unfortunately, over the course of Season 10, things got progressively less cool between the best friends. Carol's all-consuming drive for revenge against Alpha for Henry's death resulted in a plan that left Connie (Daryl's other very good friend) in danger and possibly dead. (We as viewers know that Connie somehow made it out of the cave collapse, but Daryl certainly doesn't.)

Carol immediately saw that she was responsible for this, and it broke her. But fortunately, their brief falling out culminated in another seriously sweet Daryl and Carol moment in the Season 10 mid-season finale. "You still got me," he told her. They shared a warm, comforting hug before Daryl reaffirmed, "New Mexico's still out there."

Though the latest Season 10 teaser seems to show continued tension over the Alpha and Connie situation, this embrace was all the proof we need that these best friends can (and will) be OK somehow.