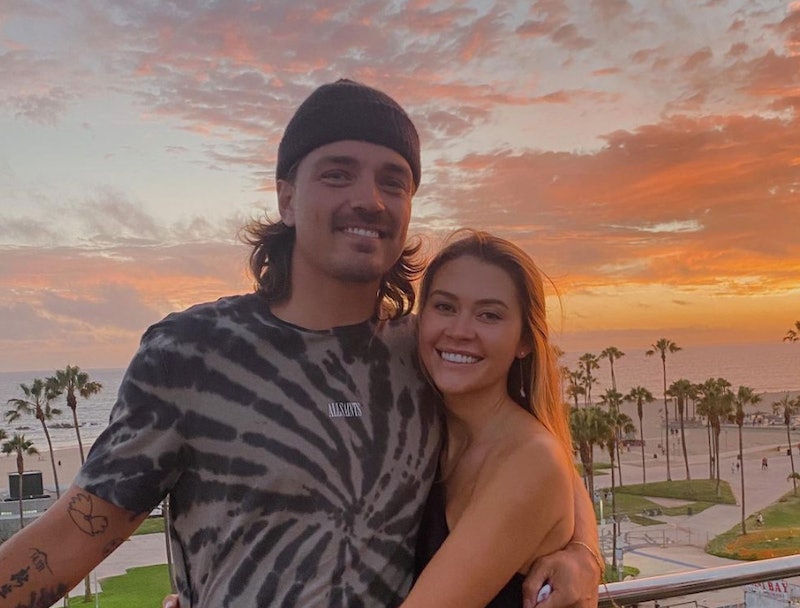 Prior to the current season of Bachelor in Paradise, it had been a while since Bachelor Nation watched their favorite contestants fall in love on the beach in Mexico. But before COVID-19 put just about everything on hold, Season 6 stars Dean Unglert and Caelynn Miller-Keyes fell so hard so fast that they wound up leaving early together. No one would’ve predicted that two years and a global crisis later, they would still be going strong — especially since Dean struggled with major commitment issues during his time on the show.

A relationship that started with so much drama and uncertainty ultimately blossomed into a serious romance full of road trip adventures and marriage rumors. And even though Dean and Caelynn aren’t married (yet), the lovebirds have taken significant steps in their relationship that prove how much they’ve grown since the cameras stopped rolling. Without further ado, here’s Dean Unglert and Caelynn Miller-Keyes’ complete relationship timeline, from falling in love on the beach in Sayulita to buying a home together.

When Dean walked down the steps at the Playa Escondida resort in time for week 2 of BiP, he and Caelynn hit it off immediately. The two were a solid couple for much of the season until Dean got cold feet, broke things off on Caelynn’s birthday, and left the beach altogether. “Our lifestyles are not going to be compatible coming out of this,” he said on the show. “And I don’t want to give you something that isn’t going to make you happy.”

After Dean’s exit, Caelynn went on to explore relationships with some of the remaining cast members, such as Connor Saeli. But a few short weeks later, Dean returned. After confessing that he couldn’t stop thinking about the former pageant queen, he asked if she would consider leaving the beach with him so that they could continue their relationship off-camera. Caelynn agreed, and the rest is history.

A few months after their rocky Bachelor in Paradise journey, Caelynn revealed that they already talked about marriage. “I always joke with him about us getting married,” the 26-year-old told Us Weekly at the American Influencer Awards in Los Angeles. “Maybe that’s in our future, but it would be way down our future.”

Elsewhere in the interview, Caelynn called her boyfriend “very romantic” and said that he brings out the best in her. “I think people were initially surprised to see my adventurous side and my camping and hiking side, but Dean definitely brings that out of me,” she continued. “He’s the most supportive boyfriend. He’s the kindest boyfriend.”

One month later, Dean shut down any and all marriage speculation when he told Us Weekly that getting married isn’t on his to-do list. “She does joke around about us getting married all the time, and I always say, ‘Sorry, it’s not going to happen,’” he said. “I don’t know, I’m super unconventional and she obviously is a little more conventional. We joke around about it. Just try to keep expectations to a minimum, you know? Like I said on the show, underpromise, overdeliver.”

After the new year, Bachelor Nation hoped that Dean had a change of heart when he was spotted wearing a band on his finger. The couple didn’t address the speculation themselves at first, but another successful Bachelor in Paradise couple, Ashley Iaconnetti and Jared Haibon, told Us in April that they thought the ring was more “symbolic” than anything else.

“Dean had the reputation of being the F boy and not wanting to be in a committed relationship. And maybe some of that was a little bit true, which Dean has expressed many, many times,” Jared told Us in April 2020, adding that Dean “cares about Caelynn so much.” Still, he seemed to think that the ring was a gesture to show his girlfriend how he feels instead of telling her.

After celebrating their first anniversary, Dean and Caelynn finally revealed the truth about Dean’s ring on The Bachelor: The Greatest Seasons — Ever! “I’m committed to Caelynn and only Caelynn,” the 30-year-old reality star said. “And that’s why I’ve been wearing it for the past six or so months.” Dean went on to explain that it’s their way of expressing their commitment to each other without tying the knot.

Caelynn seemed more than happy with Dean’s decision to wear a band on his finger. “He started wearing a hair tie around his ring finger, just to fight women off,” she said. “I liked the idea. And then we just talked about getting rings. It’s just nice to know that we’re in a strong, committed relationship without necessarily having to get the government involved, as Dean likes to say.”

A few months into the COVID-19 crisis, Dean gave an update on the couple’s relationship. “It’s always kind of tricky coming out of the show right away because you’re agreeing to date someone that you don’t really know that well,” he told Us. “And so for the first month or two or three, even we’re like still learning a lot about each other and still figuring out if it’s actually going to be a relationship that works.”

Fortunately, things worked out for the best and his time spent in quarantine with Caelynn turned out to be beneficial. “Once you kind of get past that initial, like, difficult hump, everything got really, really good for us,” he continued. “And I mean obviously, with quarantine and everything, it’s been challenging as well. Like everyone has their own challenges with quarantine. … It’s a nice test to see that the relationship is as real as you thought it was.”

Caelynn, for her part, told the magazine in May that she was grateful to have Dean amid such unprecedented times. “It’s been really tough at times, but luckily I’m quarantined with [my boyfriend] Dean, who is the most positive person I know.” She also said that lockdown gave her some time to “slow down” and focus on herself.

In April, Caelynn and Dean took a giant step in their relationship that no one who watched them on BiP saw coming. Dean seemingly overcame his commitment issues and the couple purchased a house in Las Vegas together. “We are officially homeowners!!!” Caelynn wrote on Instagram alongside a romantic photo of them in their new kitchen.

If purchasing a home together wasn’t enough to prove how far they’ve come, Dean surprised Caelynn by recreating their first date. “Yesterday Dean surprised me and took me back to where we had our first date two years ago,” Caelynn wrote on Instagram alongside a photo of the happy couple. The following month, they celebrated their two-year anniversary. “2 years of crazy adventures with this man,” Caelynn wrote alongside a carousel of some of their most treasured moments. “Happy anniversary @deanie_babies.”

There seemed to be cause for concern in late August, when Dean described Caelynn as “the most suffocating” person he’s ever dated on Jared Haibon’s Help! I Suck at Dating podcast. “It’s a horrible word, don’t get me wrong. It’s the wrong adjective to use to describe anyone in a relationship,” he clarified in a September interview with Us Weekly. “I was simply saying that in past experiences, I would hate to be suffocated, but with Caelynn, although my instinct is to say, ‘Don’t suffocate me,’ in reality, I’m like, ‘You can suffocate me because I enjoy spending time with you’ sort of thing.”

Clearly, Dean doesn’t mind that they spend so much time together because the couple is still traveling and going on adventures. This month, for example, they took a trip to Greece, which they documented on their respective social media accounts. “My Mamma Mia dreams are coming true,” Caelynn captioned one of her posts.

Although marriage isn’t on Unglert’s to-do list, a proposal may come within the next year. However, it’s not going to be Unglert who pops the question. In a new episode of his podcast with Jared Haibon called Help! I Suck at Dating, Dean recalled being asked by Derek Peth’s fiancé Saffron Vadher if he and Caelynn were married, considering the “symbolic” ring he wears on his finger.

“I said, ‘As far as the government’s concerned, no, but as far as our hearts are concerned, yes,’” he explained. “Then Caelynn leans over and she goes, ‘We’ll be engaged by 2022, trust me’ or ‘in 2022’ or something like that.” But according to Unglert, it’s not him who’s planning on proposing. “I don’t know if she’s speaking for me or if she’s saying that she’s going to propose to me,” he added.

Dean went on to explain that he’s “made it pretty clear” that if Caelynn wants to tie the knot, she needs to make it happen. “I was like, ‘If you really want to get married, you should be the one proposing to me,’ so I think she’s got something in the works for that,” he said. And although he’s not super into the idea of proposing, he’s not completely without a plan. “Give us 12, 13 months,” he confessed, “and we’ll have something a little more formal on the books.”