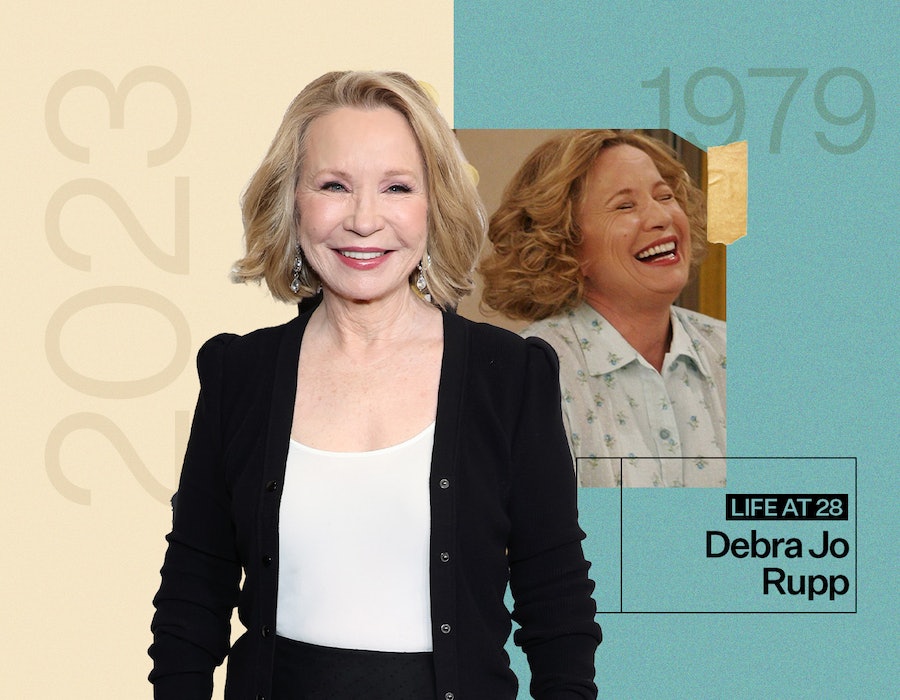 On That ’70s Show, Debra Jo Rupp played the consummate homemaker Kitty Forman, a role she reprises in the show’s new Netflix spin-off, That ’90s Show. But in reality, the actor’s life in the ’70s wasn’t quite as sorted. By 1979, when Rupp turned 28, she was living in New York and trying to make a living as an actor. “Money was always a huge problem,” she tells Bustle.

Rupp’s odd jobs included handing out drill bits at a trucking company and stapling wallpaper samples to postcards in a factory. She’d sneak off to auditions whenever she could. “I would just say to people, ‘I have to go to the bank.’ And then I would disappear for an hour,” Rupp recalls. “You know, take the subway really fast. Go to the audition. Take the subway back.”

The auditions didn’t result in an acting job until the following year, when Rupp booked a brief appearance on All My Children. She also found herself onscreen in a different kind of role, as a contestant on the Dick Clark game show The $10,000 Pyramid, where she wasn’t able to get her celebrity teammate to guess the word “pompom.”

Clark gave her a rug shampooer as a consolation prize, but Rupp didn’t own a rug. “I stared at him,” she says. “And my mother called, and she was horrified. She said, ‘You couldn’t say thank you to Dick Clark? You couldn’t smile?!’”

Fortunately, things changed for Rupp in the next decade when the self-described “very, very late bloomer” found shoulder pads, a hairstyle she loved, and her big break in the play A Girl’s Guide to Chaos, which garnered critical acclaim and set Rupp on her career path.

But first, she had to get through one final year of the ’70s — and little did she know, a show set in the very decade would one day be a defining part of her career.

Below, Rupp shares tiny kitchen-approved hosting hacks and the one anachronism she pressed That ’70s Show writers to change.

I was still feeling my way. I was always worried. I was thinking the other day, if I could go back and talk to myself, I would say, would you just breathe? It’s gonna be fine. Because all the angst and the worry didn’t help anything.

There’s a scene during That ’90s Show when Eric and Donna are at the kitchen table with the grown-ups, and Red says, “You’re upstairs people now.” Were you one at 28, or did you still feel like the kids in the basement?

I’d be the upstairs person. There’s no doubt. I knew everything, and I would stare at my parents in disbelief at what they couldn’t do. I was so obnoxious. I didn’t have it figured out, but I certainly felt like I was smarter than most anyone I knew for no good reason.

It definitely had a bar. And dinner, sometimes. There was usually a Mexican restaurant with frozen margaritas and tortilla chips. And that was the night out — because I could be there forever.

And what about at home? Kitty is such a good host. Were you an entertainer among your friends?

I had some tiny homes, but I could do dinner parties. Maybe once a year. But when I did it, I knew how to do it. They involved getting plywood from a trucking company to make the table big enough for people to sit around. And there were always tablecloths and flowers. And the food was good in a very, very, very tiny kitchen in New York City.

What was your go-to outfit at the time?

My prettiest was this black velvet dress — long, with huge shoulder pads. And then, glitter and sequins around a V-neck. And then I had Farrah Fawcett hair. I’d wear that dress for five years, every holiday season.

Do you like any of the fashion trends coming back from that era?

In the late ’70s, shoulder pads were coming in. I see those coming back a little bit. That, I love. Bell bottoms, I’ve always hated. I have no legs! So the bell part was at my knees.

Having grown up in the ’70s, were there elements you contributed to the original show — or conversely, things that made you say, “That’s not quite accurate”?

Language. I am the language police. And I do the same thing on ’90s because the writers on both shows are younger. I can’t even tell you how many times I’ve had to say, “We did not say ‘awesome’ [back then].” And they’d look at me like I was a crazy person!

As the cast on That ’70s Show grew into their 20s, did you see yourself in any of them?

No, because our circumstances were so different. They were on a hit show, and they had money — they weren't going through the same kinds of problems. I would say Mila [Kunis] because Mila had her first kiss on the show. And then Laura [Prepon] was a little bit of a partier, and I was too. At her age, I think that’s just natural.

Did anything on the show feel reminiscent of your own experience?

Oh, so much of it. The girls’ insecurities — am I pretty enough? All that dating stuff, everything they worried about. Maybe the only thing I didn’t do at that age was go to a restaurant and then run out and not pay the bill. I never did that. But everything that they got into, either I had been a part of at that age or had witnessed. And I think that’s one of the reasons the show was such a success.

More like this
At 28, Rosie Perez Risked Her Career To Stop Playing Stereotypes
By Gabrielle Bondi
Ashton Kutcher Wants Danny Masterson “To Be Found Innocent” In Rape Retrial
By Jake Viswanath
'Bling Empire: New York’ Star Dorothy Wang Wants To Try 'The Simple Life'
By Alyssa Lapid
Here’s Everything Coming To & Leaving Netflix In February
By Jake Viswanath
Get Even More From Bustle — Sign Up For The Newsletter
From hair trends to relationship advice, our daily newsletter has everything you need to sound like a person who’s on TikTok, even if you aren’t.