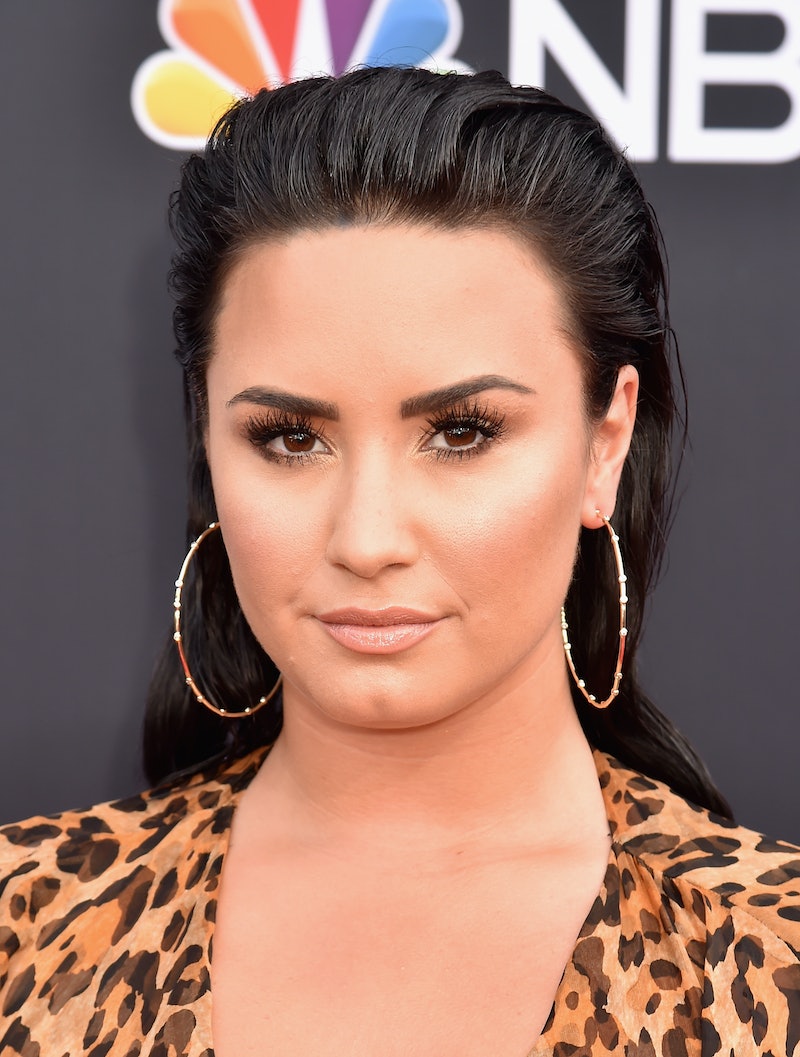 Demi Lovato recently dropped a new song that is definitely about her ex-fiancé, Max Ehrich, but aside from that, the singer has mostly kept her feelings about their relationship to herself. (As for Ehrich... that's a different story.) Much to the delight of those who are wrapped up in the drama of it all, on Sunday night, the People's Choice Awards host poked fun at her whirlwind romance and getting "unengaged" this summer.

"I am so excited to be here tonight because honestly, this year has been the longest three years of my life," Lovato told the audience during her opening monologue. The "Still Have Me" singer acknowledged her year started out strong with a Grammy Awards performance and the opportunity to sing the National Anthem at the Super Bowl before 2020 took a turn. She continued, "COVID hit and everything shut down, so I did what everyone else did, I went into lockdown mode and got engaged."

The host then listed off the hobbies she took up during lockdown, saying "I got into painting, photography, meditation, tested the limits of Postmates Unlimited." Joking about her split, she added, "I also didn't know this could happen, but I reached the end of Instagram four times. I binged seven seasons of Pretty Little Liars, got unengaged, and then I went looking for aliens in the desert. So basically the same as everyone else."

Ehrich has been active on Instagram since Lovato's joke, but it's not immediately clear if he heard about her monologue or what's going through his mind right now.

Lovato and Ehrich began dating in March, and the two got engaged several months later in July, as per People. The couple called it quits in September, with an anonymous source claiming the singer had learned Ehrich's "intentions weren't genuine," according to Elle. The source added that "breaking off the engagement was not an easy decision."

Ehrich did not seem to handle the split well and posted a series of messages about their relationship on his Instagram Story. "Imagine finding out about the status of your relationship through a tabloid," he wrote. Meanwhile, an anonymous source close to Lovato disputed the claim, stating she discussed the breakup with him and gave him a heads up before it came out in the press.

While ending the engagement might have been a fraught decision, Lovato seems to be taking the high road and channeling the heartbreak into creativity and PCAs jokes.

More like this
Adam Devine Hilariously Let Everyone Know He’s *Not* Accused Cheater Adam Levine
By Brad Witter
Dixie D’Amelio & Noah Beck “Love Each Other” Despite Breakup Rumors
By Julia Emmanuele, Jordyn Tilchen and Grace Wehniainen
Hailey Bieber Just Responded To *That* Viral Met Gala Moment
By Radhika Menon and Sam Ramsden
Molly-Mae Hague & Tommy Fury Celebrate Pregnancy Reveal In The Sweetest Way
By Sophie McEvoy and Sam Ramsden
Get Even More From Bustle — Sign Up For The Newsletter