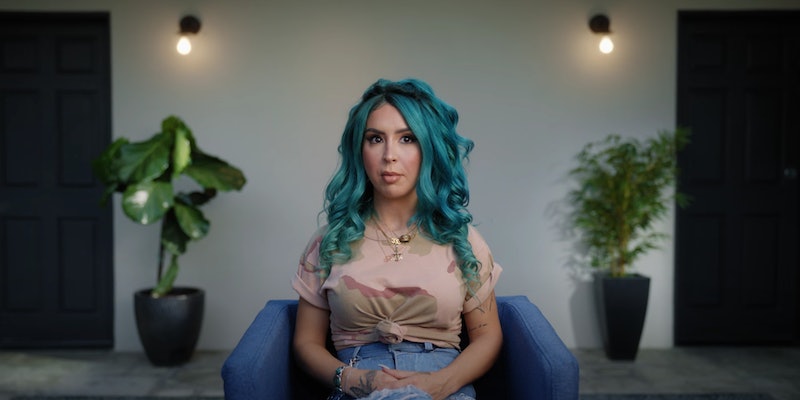 “I can’t believe you guys are doing this,” Demi Lovato’s best friend, Sirah says in the trailer for Demi Lovato: Dancing with the Devil. Her use of “this” refers to fully disclosing the details of Demi’s 2018 near-fatal overdose. Sirah, whose full name is Sarah Elizabeth Mitchell, witnessed it — and she and friend Matthew Montgomery have stuck with the “Sober” singer throughout the last two years of recovery.

In May 2019, Demi thanked both of them for their loyalty in an Instagram post. “Thank you for never leaving me in my darkest moments, for always drying my tears.. even when they’re from watching Moana,” Demi wrote. She then praised them for sticking with her at her worst. “You were there to listen, without judgement and only love and I can never fully express what that means to me,” she added. “You’re the greatest friends I’ve EVER had and our future together is so bright.” Here’s what else there is to know about Sirah.

Sirah cherishes her friendship with Demi’s just as much as the pop star does. In a June 2019 Instagram post, she shared another photo of their friend trio, confessing her love for both Demi and Matthew. “Thank you @ddlovato for always making me feel like a lil princess and for recreating the childhood I never got,” she wrote. “You’ve taught me how to swim, how to ski, you’ve dyed my hair, let me hide from the world in your bed w/ID channel. I know why the world loves you but they’ll never know all reasons I do.”

This year, Sirah hasn’t been super active on the platform, other than one Valentine’s Day post.

Her lack of online presence could come from a desire to be more present in daily life. In August 2020, she celebrated her 32nd birthday and thanked followers for the sweet wishes, but said she wouldn’t be responding “bc i wanna live IRL.” In a June 2020 post, she wrote, “I’m grateful for friendship, humans n their resilience, laughter amidst the pain,” which seems relevant to Demi’s documentary.

Sirah Is A Musician, Too

Sirah is a songwriter and rapper in her own right. She and Skrillex won the 2013 Best Dance Recording Grammy for "Bangarang,” and in October 2020, she shared the debut of Saweetie’s “Back to the Streets,” which she co-wrote. She also has a feature on Demi’s 2015 track “Waitin’ for You” and recently released her own splice pack — a set of sounds and loops for use in hip-hop tracks for other musicians to enjoy.

She Has Experience With Sobriety, Too

According to the Los Angeles Times, Sirah lost her dad to an overdose when she was 12. After that, she moved to Los Angeles to avoid being placed in foster care and ended up “cooking crystal meth and selling guns and running drugs,” she told the publication. At 17, she entered a 12-step recovery program and is now a certified peer-to-peer recovery coach. A little over a month before Demi’s overdose, she was named to the board of directors at the nonprofit Young People in Recovery, which provides accountability and resources for young people in recovery to thrive.

As someone who has lost multiple friends to substance misuse, Sirah is passionate about preventing overdoses in the music industry. “Drugs have killed a lot of our favorite artists,” she told The LA Times. “I think we’re tired of it.” She added that although she’s sober, she continues to struggle with depression as outlined in her 2017 song, “Zoloft.” “It’s so crucial to let people know that, yeah, I’ve won a Grammy and I’ve done really well and I’ve been rapping and I have songs with Demi and Skrillex and Lupe Fiasco, but like right now, I’ve got depression,” she said. “And that’s OK. That’s life.”

More like this
How Ghosts Inspired Kesha’s New Music
By Jake Viswanath
Kendall Jenner Thinks Tristan Thompson "Wanted To Trap" Khloé With Another Baby
By Jake Viswanath
Khloé Kardashian Debuts Baby Boy On 'The Kardashians' Season 2 Premiere
By Jake Viswanath
Where Is Armie Hammer’s Ex-Wife Elizabeth Chambers Now After 'House Of Hammer'?
By Grace Wehniainen and Radhika Menon
Get Even More From Bustle — Sign Up For The Newsletter