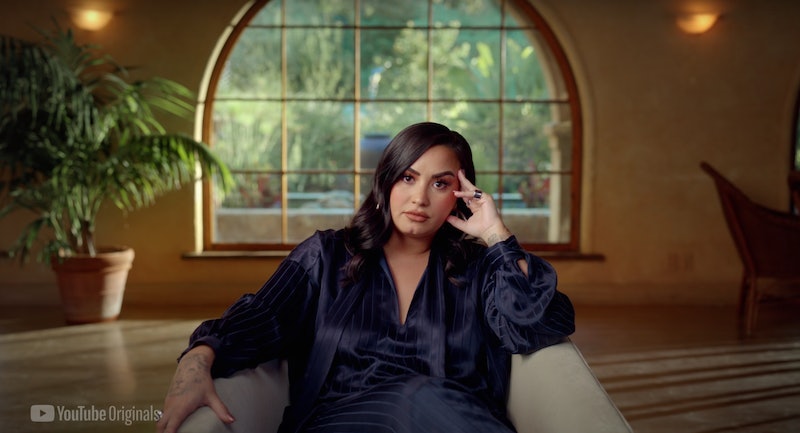 Demi Lovato’s new docuseries Demi Lovato: Dancing With The Devil will feature interviews from her sisters, Dallas Lovato and Madison De La Garza. At 33, Dallas is older than 28-year-old Demi, and they are both daughters to the late Patrick Lovato. Their younger half-sister Madi is 19. And while neither of them have experienced Demi-level stardom, they’ve earned their own success in the entertainment business. Here’s everything to know about them.

Dallas Lovato Is An Acting Coach

According to her Instagram, Dallas is an acting coach and talent scout who has worked with Selena Gomez and Amber Montana, as well as on the sets of Toddlers & Tiaras and Dance Moms. She’s also done quite a bit of voice acting and guest TV roles. And when the pandemic hit, she and her mom Dianna De La Garza started their own mask-making business. Fun fact: Dallas was named after the Dallas Cowboys because Dianna was a cheerleader for the team in the ’80s, per IMDb.

Dallas is one of the many people who found TikTok during quarantine, and she appears to be a fan. She’s shared TikToks of her pets, random California hail storms, and a comparison of her and her sisters to Mean Girls.

In a particularly emotional recent post, she opened up about experiencing anxiety after breaking off a long-term relationship, but she’s doing her best to stay positive. “Proud of you!” Demi commented. Dallas replied: “Thank you for being her fore me especially now... I’m so happy I have you as my sister AND FRIEND.”

Madison Is A Screenwriter

You may know Madison as young Juanita Solis from Desperate Housewives. Since then, she’s held a few smaller roles in Bad Teacher, Good Luck Charlie, and has done some voice acting. But most recently as a college student, she’s ventured into screenwriting and directing. She co-directed a 2020 short film called Pink Elephant and produced the sci-fi film Subject 16, which is available on Amazon Prime.

Madi mostly posts selfies to her Instagram, the latest one appearing on March 20. But she hasn’t posted much at all in 2021. Shortly after Demi’s near-fatal overdose in 2018, she shared a sentimental post honoring her big sister’s birthday. “She’s a daughter, a friend, and my big sister... and i am so, so thankful that i can tell her happy birthday,” Madi wrote.

Demi Has A Third Sister

Demi’s dad, whom she wasn’t very close with, had another daughter, Amber Lovato, before she and Dallas were born. Demi didn’t know about her until she was 20, and they finally connected when Amber reached out shortly before their dad died in 2013. “I asked her, ‘Why haven’t you ever contacted me?’” Demi said in a radio interview with Dana & Jeffrey in the Morning, per E! News. “And she just said, ‘Well, because I never wanted you to think I wanted anything from you. So I’ve just kind of been waiting to see if you wanted a relationship,’ and I just thought that was so incredible.”

More like this
How To Apply For 'Survivor' & Tips On How To Get Cast
By Meg Walters
‘RHOSLC’ Star Jen Shah’s Arrest & Legal Drama, Explained
By Brad Witter and Jake Viswanath
'RHOSLC’s Newest Cast Member Has Tried To Become A Housewife Before
By Jake Viswanath
Bachelorette Gabby Kissed Her New Fiancé On 'Dancing With The Stars'
By Jake Viswanath
Get Even More From Bustle — Sign Up For The Newsletter