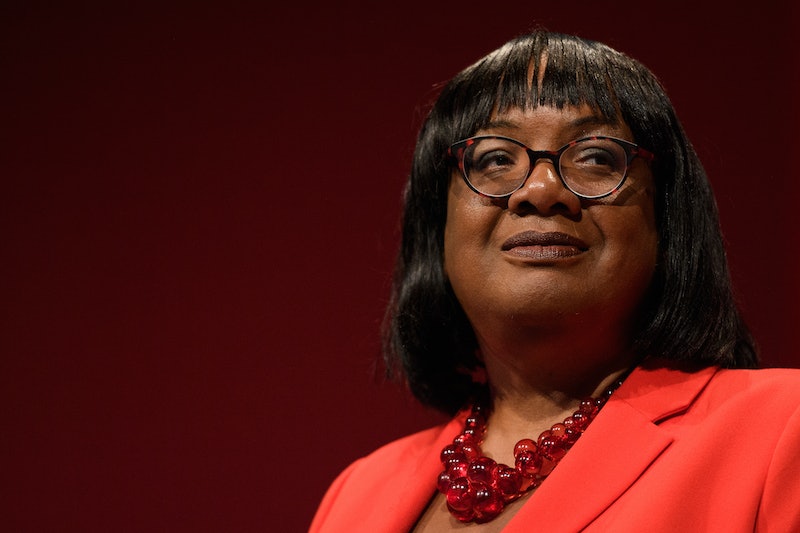 Labour MP Diane Abbott has voiced her support of Meghan Markle and Prince Harry following their interview with Oprah Winfrey. Speaking on BBC Radio 4's Today Programme, the UK’s first Black woman MP, who is no stranger to online abuse, spoke about the racism towards Meghan, and the resulting impact on her mental health.

In the interview, which aired in the UK on ITV on Monday March 8, Harry and Meghan discussed the difficulties they faced before and after their marriage, fears for their personal safety, and the racialized treatment of Meghan by the British press and royal family.

Speaking on BBC Radio 4, Abbott said, per the Guardian: “The relentless negativity and abuse is awful. It’s not just any one article or tweet, it’s knowing that day after day, there are going to be abusive tweets and stuff on Facebook. Day after day, you’d open a newspaper and see an article, or a news story, which completely distorts your position. And above all, there’s a presumption that you’re not human.”

In the interview with Oprah, Meghan spoke candidly about having suicidal thoughts as a result of her treatment by the press: “I just didn’t want to be alive anymore. And that was a very clear, and real, and frightening constant thought.”

Abbott drew parallels with her own experiences: “One of the most upsetting things is when people, meaning well, will say: ‘Oh, but Diane, you’re so strong.’ Nobody is that strong. Nobody can take the sort of abuse that Meghan had to take, and that I’ve had to take. And by dismissing it by saying: ‘Oh, Black women are strong,’ that’s denying our humanity.”

According to Amnesty International, in 2017 Abbott received an “incredibly disproportionate amount of abuse, and was the target of almost a third (31.61%) of all abusive tweets analysed.” Abbott is also reported to have received 10 times more abuse than any other woman MP in the run-up to the 2017 general election.

The former Shadow Home Secretary was one of 72 cross-party MPs who signed an open letter in 2019 condemning media coverage of Meghan, a time Harry recalled in the interview with Oprah. “Over 70 female members of parliament called out the colonial undertones of articles written about Meghan,” he said, “but nobody in my family said anything, over the course of three years.”

Abbott said the Oprah interview was a good opportunity for Black and mixed-race women to fight the myth of the ‘strong Black woman’ trope. “We shouldn’t internalise the idea that we’re not supposed to feel vulnerable, we’re not supposed to get upset, and we should have people around us that we can confide in, or we can be open with,” Abbott said. “Otherwise, it’s incredibly corrosive.”