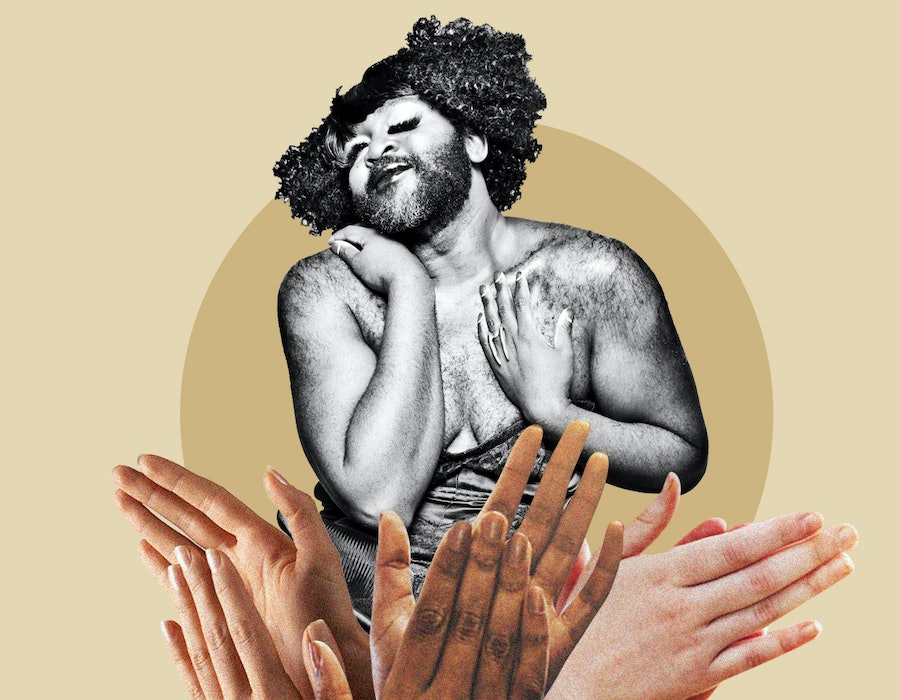 Eli Schmidt
Do It For The Applause

Welcome to Do It For The Applause, a series in which we ask performers, writers, business leaders, and public figures to think about the notion of applause and what it means to them. Today, we hear from writer, singer, actor, and drag artist Le Gateau Chocolat.

Le Gateau Chocolat’s ‘big break’ onto the Brighton cabaret scene couldn’t be more Brighton; he was discovered by Dolly Rocket on the dance floor of a Dynamite Boogaloo night. For the uninitiated, that’s kind of like Dolly Parton pulling you up onstage at a bar in Nashville.

Back then, Drag Race didn’t exist, nor did “years of material on YouTube” to draw from, explains Chocolat (whose offstage name is George Ikediashi). Drag was all about trial and error. “I remember I had one tube of lipstick from Princess Twinkle Knickers, who was also part of the Dynamite Boogaloo Troupe. It was cerise pink and I used it for lipstick, blusher, and eyeshadow.”

Drag was never part of Chocolat's plan – he graduated from Sussex University with a law degree, an interest in choral and operatic music, and dreams of becoming a theatre performer – but after being discovered by Dolly Rocket, his drag persona developed “organically.”

In the years since, Chocolat has carved out a niche that resonates not only in Brighton and the UK, but around the world. His shows, which span drag, cabaret, opera, musical theatre, children’s theatre, and live art, have toured around Europe and Australia. Right now, his much-loved family show Duckie is being streamed in collaboration with Manchester’s HOME theatre.

Duckie is a reimagining of The Ugly Duckling. “The fairytale finishes with the duck becoming a beautiful swan, but in my version, the duck just becomes a bigger duck,” Chocolat says. “And that was a very important message to pass on because the fallacy at the heart of the The Ugly Duckling is quite problematic. I mean, ducks can't even become swans. That's just a mistake. But even more problematic is this idea that you become something more beautiful if you've been through adversity. And that's such a lie. The painful truth is that not everyone who goes through adversity actually comes out successful. There are no do-overs. Instead, you should embrace who you are. Embrace all of it.”

Having sold out performances of Duckie in the UK and Australia, Chocolat is now working to franchise the show and set up a school tour. It’s one of the many projects that'll be supported by the Arts Council England (ACE) funding his company, Le Gateau Chocolat Ltd, received in October this year – funding that landed him in the middle of a media storm.

When Chocolat was awarded £215,000 from ACE to help his company survive the financial hardship of COVID-19, media outlets pounced, implying he had been given an unjustified handout. Along with that came trolling and Twitter abuse, including people placing the blame for child food poverty at Chocolat’s door.

“It's a lot to hold because the level of ferociousness means that you start to question if it's you,” Chocolat tells me. “And unless you have the right people around you to scaffold and hold you mental health-wise – and sometimes physically – through this, it's very, very difficult.”

Speaking about the media coverage, Chocolat says: “People think they know and they don't know. People meet you where you are without actually investigating how you got here, and it's really shoddy, really sensationalist, really racist journalism. Because a casual Google search would reveal that none of this works [in that way].”

My Google search led me to data published by ACE, which reveals that Le Gateau Chocolat Ltd was one of 240 organisations to receive a sum between £200,000-£250,000 as part of this year’s Culture Recovery Fund. What, then, is the issue?

Perhaps the confusion (if we can call it that) can be ascribed to the fact that Chocolat’s company name may suggest he is operating as just one individual, rather than an organisation that puts on multiple shows per year, employing around 80 people from lighting designers to 16-piece orchestras. People were outraged that one person should receive such a large sum of money. But then why was there no uproar about Nicholas Garrod, James Lindsay, David Pugh Limited, Angela Browne Ltd, and others who received a similar sum?

Chocolat believes it’s because his identity sits at what he describes as “the intersection of hate.” He’s a Black, bearded, plus-sized drag performer. “That's precisely what is being weaponised here,” he says.

When it comes to dealing with this kind of backlash, Chocolat has years of experience. In 2019, for example, he faced similar vitriol during and after a performance of his at the Bayreuth festival in Germany. He's learnt to ignore people who want him to justify who he is and what he does. “The tone is always, ‘You should be grateful,’” he tells me. “A random stranger wants me to be grateful for the license that they've given me to just exist.”

But Chocolat doesn't just exist, he thrives, and he won't be asking for permission from anyone to do so.

"It’s really interesting — my answer has changed thanks to Duckie. I did Duckie because I have two nieces, and I wanted them to see themselves on stage. They were at the heart of why the piece became what it was. Because I think that, when diversity serves its purpose, which is representation, entertainment becomes more than entertainment, it becomes possibility. And if you can curate – if you're lucky enough to be platformed to curate – the imaginations of children, I think that's a gift that you can give. Telling them, 'You can be this.'

"Seeing children’s reactions to Duckie was very humbling. One mother brought her deaf child to the show, and when the child saw that Duckie’s choreography included British Sign Language, her face lit up. It was extraordinary. And then another boy had been secluded a lot from school, and his mum sent me a message saying that he was so happy to have seen Duckie because it made him happy to be himself, which was really, really beautiful. Another mum was really tearful after the show because, through it, she got her daughter to open up about why she wasn’t eating – because she was being bullied at school for being fat. Those have been amongst the highlights in terms of the best kind of applause I received because they were so unexpected. And the show, even though it was a kid's family show, held existential and hefty ideals that were actually landing and I'm really humbled by the effect it had."

"I like calls and texts, and not just from people nearest to me, but people who've experienced my shows. It’s so interesting because, even though I'm candid with the audience in some of the material that I tackle, I never expect that they're going to be just as candid with me. So when I read some of the messages, I'm absolutely destroyed by them, like devastated, weeping, because they've been so magnanimous in being so candid. So, when people send messages either via Facebook, Instagram, orTwitter, where they [say they] see themselves in a story that I've held, it's incredibly unnerving, because most of the stories are linked to my life and my identity and my history. So I would say, messages on any of the platforms."

"My favourite kind of compliment is someone having trust and belief in your craft. In a way that is almost unspoken. It's just, 'We will book you and we trust in the quality of what you're going to deliver.' So I did this thing with the BBC earlier this year called The Way Out, and the best compliment was the director and the designer not questioning what I thought would work. I did it all remotely – I was in New York at the time. So none of it was made with direction from me in person. I sent them images and said, "This is what I'm thinking," and they just believed in the vision. They trusted me to deliver and all these kind of disparate elements, which conspired to create a piece of television that's part of The Way Out, which I really loved."

"My least favourite is when people express surprise that I was good. Or, worst of all, after paying to see me do a full show, they suggest I consider doing it professionally. And that always comes hand-in-hand with suggestions of Britain's Got Talent or RuPaul’s Drag Race. And that’s nothing against RuPaul’s Drag Race – it’s a brilliant showcase of the queer community – but I didn't aspire to be a drag queen. That was not my goal, and it's carte-blanche, broad-brushstroke thinking that anyone who does drag should do Drag Race."

A compliment can offer a moment of profound humanity where someone is saying, 'Something that you did, that I have no control over, touched me in some way or form, whether it made me laugh or made me cry or made me feel something.' So for that time, you need to just have enough space, even if it's practiced, to be humble enough to accept it.

"But why we feel embarrassed by it is a completely different thing – that should be studied. I think it must be linked to our id … because part of it is, when someone compliments you, they’re seeing you. And one thing that we're bad at doing – I'm bad at doing – is seeing ourselves, looking at ourselves. People find that difficult. I find it difficult. I think we have such a dysmorphic relationship with how we see ourselves and a lot of the time what that person has just said has zero compatibility with how you see yourself, and so that interception is almost like opposite ends of a magnet coming together. There is this really brilliant quote from The Perks Of Being A Wallflower that comes to mind – 'we accept the love we think we deserve.' And if whatever someone is saying is effusively positive, and no part of your psyche sees that, then it's knocking heads with your identity. And especially if your identity, or part of your identity, is publicly marginalised, whether you're a fat person, a black person, a disabled person. Yeah, there’s lots of things to think about there..."

"I don't know that it's a person, but regional theatre and producers. At the moment, they trying everything they possibly can to navigate the pandemic whilst also scaffolding an ecosystem that has taken years to build. What they’ve built didn’t happen through somebody bequeathing them money, or the Arts Council grant that they got this year and didn't get last year. This has been a labour of love and investment. So, theatres in Portsmouth, Chichester, Sheffield. All these places are so integral to the UK's theatre scene and cultural identity, and I know that they are working over and beyond to try and make sure they survive this so that they can keep creating."

More like this
8 Easter Eggs From Taylor Swift's “Lavender Haze” Music Video
By Shahed Ezaydi
You’ll Definitely Recognise Isadóra Bjarkardóttir Barney’s Mum
By Maxine Harrison
Harry Styles Just Split His Pants In Jennifer Aniston’s Face
By Sam Ramsden
Cat Burns Explores A Deeply Personal Struggle In “People Pleaser”
By Catharina Cheung
Get Even More From Bustle — Sign Up For The Newsletter
From hair trends to relationship advice, our daily newsletter has everything you need to sound like a person who’s on TikTok, even if you aren’t.