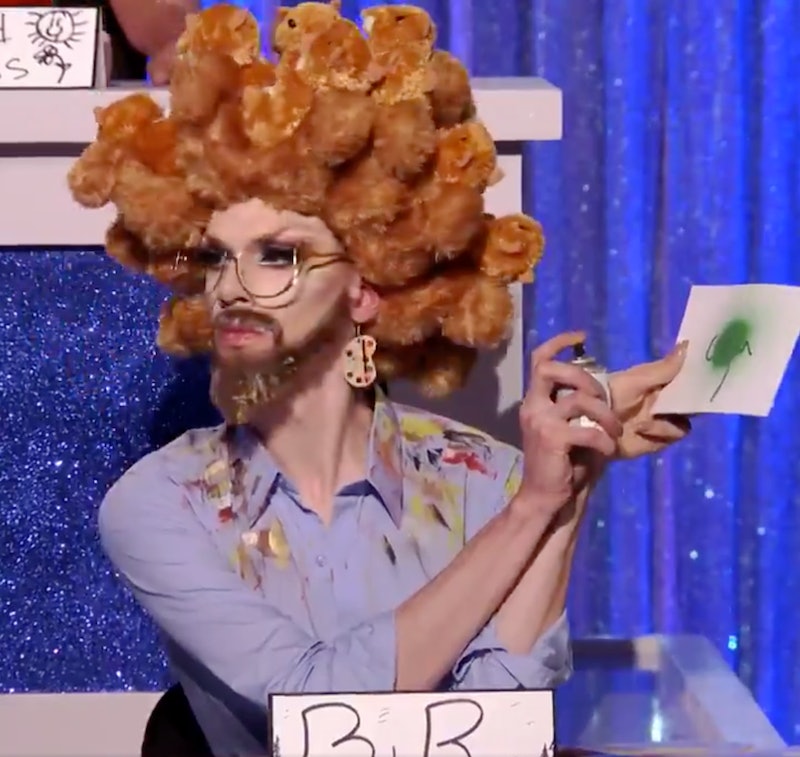 Prepare yourself to be gooped and gagged: the Drag Race Season 13 Snatch Game is upon us, and Utica Queen says it will be "one to be remembered." She describes this season's celebrity impersonations as "ridiculous," "off the wall," and "really kooky," adding that she was "very surprised" by some of the queens' choices. "I was like, 'This character? I haven't even heard of this character," Utica tells Bustle. "Or if I have like, 'How are they going to make this funny? Or make this entertaining?' And girl, they do."

It's not surprising to hear Utica hype up her fellow contestants, but when describing her own Snatch Game performance, she takes a humbler tone. "It's a doozy of a time," she says. "I was in acting and theatre and junk but like, wow, Snatch Game is a whole other beast." Not to mention the fact that she's up against some talented queens. "I found myself just trying not to cackle out loud and break character," Utica adds. "It's really difficult to stay in it when you yourself are being so entertained by the people around you."

In the exclusive clip below, the queens prepare for the challenge and chat about their families seeing them in drag. Elliott shares that her grandpa attended one of her shows at 80 years old, and Rosé remembers her dad crying while watching her perform for the first time. Denali, on the other hand, wishes her family was as accepting of drag as they are her figure skating career.

Though Utica isn't in the clip, she says that sharing drag with her family has been a "magical" experience. "They say that Drag Race brings families together, and I definitely feel like that's true with mine," she says, adding that the show was her parents' first real experience with the art form. "They love it ... we've really just bonded so well [and] they love what I'm doing. I think at first, they were really concerned for my safety, especially with coronavirus and being put in the spotlight. But I think it's brought us even closer."

More like this
Here's The Full List Of Zach's Confirmed & Potential 'Bachelor' Contestants
By Kadin Burnett and Grace Wehniainen
Everything To Know About 'RHONJ' Season 13
By Brad Witter and Jake Viswanath
Netflix's 'Bling Empire' Season 3 Trailer Includes A 'Selling Sunset' Cameo
By Kadin Burnett and Sam Ramsden
‘The Ultimatum: Queer Love’ Is Officially On The Way
By Radhika Menon and Kadin Burnett
Get Even More From Bustle — Sign Up For The Newsletter