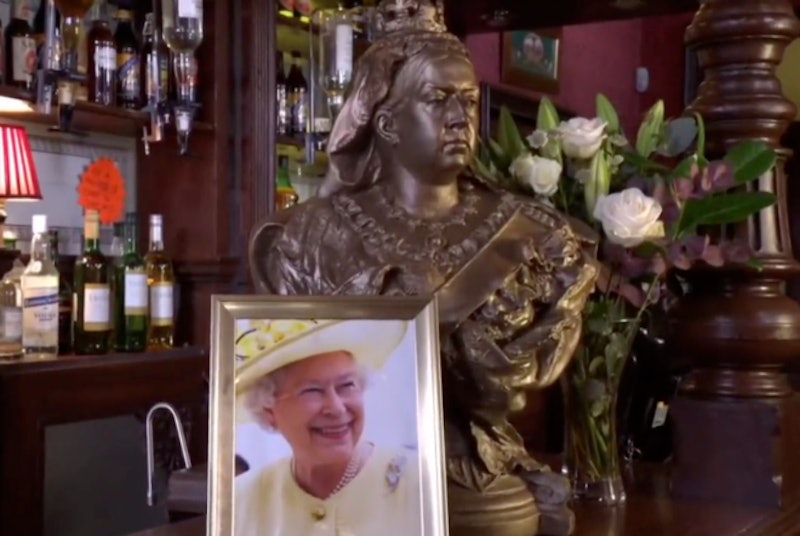 As the nation continues to mourn Queen Elizabeth II’s death, homages are being paid for the Britain’s longest-reigning monarch. Paddington Bear shared a sweet tribute to Her Majesty, uniting the nation with a beautifully simple statement. And British TV soaps are also finding ways to honour the Queen. On Monday, Sept, 12, BBC One’s EastEnders dedicated a scene to Her Majesty, and it was well received by viewers.

The show opened up with three lead characters talking in The Queen Victoria pub, typically referred to as “The Queen Vic” by Albert Square residents and fans alike. Denise Fox (Diane Parish), Linda Carter (Kellie Bright), and Kathy Beale (Gillian Taylforth) could be seen looking at a gold-framed picture of Queen Elizabeth II, which was propped up on the bar. “God bless her,” Kathy remarked. With Denise noting, “She’s been there our whole lives.” Emphasising the impact the Queen’s made during her 70-year reign, Linda added: “We’ve all lost our nan. She dedicated her entire life to serving us.” The trio also discussed trying to get used to saying “God Save The King” in reference to the new ruler, King Charles III.

Having shared their memories of the Queen’s jubilee celebrations, Linda ended the moment of reflection by placing the framed picture of Her Majesty next to the pub’s iconic Queen Victoria bust. “Look after her, won’t you,” Linda said, leaving the two together.

The EastEnders episode prompted warm reviews from viewers, who shared their reactions on social media. One said: “Wow. The first minute of EastEnders was beautifully written. Stunning tribute to Her Majesty The Queen.” Another remarked: “It’s like we lost our nan. Can we just say ‘well done’ to the writers of EastEnders. This scene between Linda, Kathy, and Denise is the most beautiful tribute to the Queen. They always deal with things like this in the most incredible way.”

Others were brought to tears by the sweet tribute, with one viewer tweeting: “OK, how many of us started crying at the beginning of EastEnders, when Linda put our Queen with Queen Victoria?”