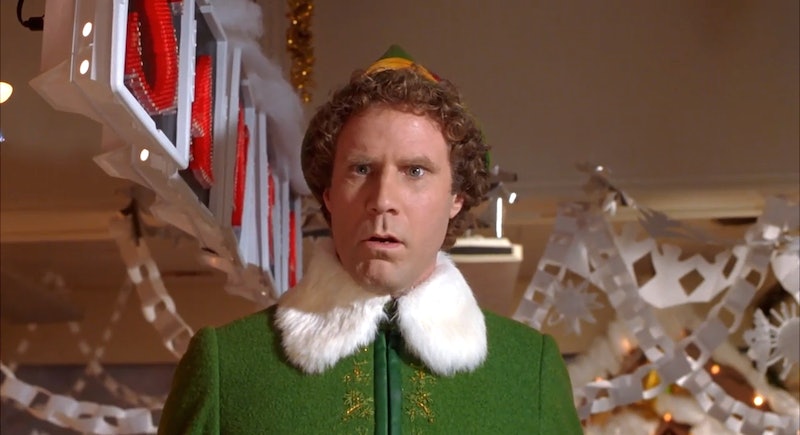 Even though it’s already nearly 20 years old, Elf sits firmly in the classic Christmas film canon. Will Ferrell’s Buddy the Elf is an expert in spreading Christmas cheer, whether it’s by singing loudly for all to hear, crooning “Baby, It’s Cold Outside” with Zooey Deschanel’s Jovie in private, or even by getting hit by cabs on the streets of New York City. Buddy’s childlike innocence can get anybody into the holiday spirit, including his Scrooge-like biological dad, Walter Hobbs (James Caan). But while you’ve probably seen this movie hundreds of times since it came out in 2003, you still likely missed these things while watching Elf.

In an interview with Rolling Stone for the 10-year anniversary of Elf, director Jon Favreau said it was his hope from the start that the film would become a holiday classic. “Our goal, even then, was to make a movie that could be part of that pantheon,” he said. “The fact that it’s in rotation is the highest honor that movie can have.” Years later, it still holds true.

Elf has the ability to make you laugh and cry and be filled with holiday wonder, just as any good Christmas flick should. And perhaps it’s because Buddy excels at transporting you to a time when you believed in Santa Claus that you may have missed some fun details you otherwise would have picked up on, including tons of nods to other beloved Christmas flicks. So in the interest of spreading holiday cheer, here are 27 things you never noticed in Elf before.

1. Ming Ming The Elf Is A Holiday Movie Star

The elf Ming Ming oversees toy production and unintentionally helps Buddy realize he’s a human. Although his role is uncredited, Peter Billingsley plays Ming Ming and the actor is best known for being Ralphie in 1983’s A Christmas Story. You’ll shoot your eye out!

2. The Sound Of The Jack-In-The-Box Is From Disney

The horrifying laughter in the Jack-in-the-boxes that Buddy tests is actually from a classic Disney film. The laugh is from the hyena in the zoo in Lady and the Tramp, which someone was kind enough to share on YouTube to confirm. It’s also the sound of the laughing hyenas featured in the Magic Kingdom area at Disney World in Orlando, Florida.

3. Rudolph The Red-Nosed Reindeer Is A Big Inspiration

Favreau explained in the Rolling Stone interview that he chose to make it look like Buddy grew up in the stop-motion animated TV special Rudolph the Red-Nosed Reindeer — a well-established Christmas classic. And the director’s source of inspiration is definitely visible. All of the elves’ outfits are designed to look like those seen in Rudolph, with Buddy’s costume matching the Head Elf’s. You can see the homage in Santa’s workshop, too.

Leon the Snowman was another character inspired by the 1964 animation, and he looks very much like Rudolph’s Sam the Snowman with his mustache, goatee, hat, and all-around dapper appearance. Beyond that, the snowman’s name comes from his voice actor, Leon Redbone — and Leon coincidentally spells “Noel” (aka Christmas in French) backward. Fun fact: Redbone also sings “Baby, It’s Cold Outside” with Deschanel during the credits.

5. The Polar Bear Cub Is Voiced By A Pioneer In Stop-Motion Animation

In the credits, Ray Harryhausen is listed as the Polar Bear Cub. Although he has passed since Elf came out, Harryhausen is a legend when it comes to stop-motion animation. He was even given the prestigious Gordon E. Sawyer Academy Award in 1992 for his impact in the motion picture industry. Among the many Hollywood heavy hitters he has inspired are Steven Spielberg, Tim Burton, and James Cameron, according to the British Film Institute magazine Sight & Sound.

6. Deb Has Some Bizarre Dinner Plans

You probably have never paid attention to Amy Sedaris’ character’s phone conversation when Buddy first arrives at his father’s office, but Deb has some truly questionable weekend plans. She can be heard saying she’ll be “declawing” eight kittens on the phone. Don’t do it, Deb! Especially since declawing kittens in New York has been made illegal.

7. One Of The Security Guards Is Will Ferrell’s Brother

Patrick Ferrell is listed as one of the security guards, and he appears to be Will’s real-life brother. Going to go out on a limb here and say that Patrick is the taller security guard on the left in the above photo. He also made a cameo in another of his brother’s movies, The Other Guys, in 2010, this time as one of two precinct detectives.

8. The Store Buddy Where Works Shares A Name With A Store From Another Holiday Classic

Buddy works at the department store Gimbels with Jovie. Although no Gimbels existed when Elf was made, Gimbels was a real store that shut down in 1986, and it was featured prominently as Macy’s competitor in the original Miracle on 34th Street. Macy’s has since been the go-to Christmas department store destination of late, with its extravagant holiday window displays attracting lots of onlookers.

9. The Gimbels Manager’s Name Is Wanda

Faizon Love plays the manager at the department store, and he’s simply credited as “Gimbels Manager.” But his name tag says his name is Wanda, a detail that left many fans confused. In the 2020 Netflix special The Holiday Movies that Made Us, the story behind the name was finally revealed. Producer Jon Berg said it was actually comedian Wanda Sykes who was slated to play the manager, but she “dropped out at the last minute.” He added, “[Jon] Favreau knew Faizon Love and called him up and he came in and did us a solid.” Mystery solved.

10. The Kid Who Sits On Santa’s Lap Is Really Named Paul

When Buddy yells at Artie Lange’s Santa at Gimbels for not being the real North Pole OG, a child is sitting with Santa. The boy is credited as “Kid with Santa,” but his real name is Paul Schofield. Paul also happens to be the name he gives to Santa, so no acting was required.

Anyone else notice that Michael and Buddy’s water glasses were empty at dinner? No wonder Buddy feels the need to drink a whole 2-liter of Coke at dinner at his dad’s house — he’s thirsty.

12. Director Jon Favreau Is The Doctor

Nowadays, Favreau is a big-time director with films like Iron Man and The Jungle Book under his belt. But before Elf, he was better known for being an actor and he appears as the doctor who does the paternity test for Walter.

Playing the doctor wasn’t the director’s only cameo. He also later revealed he voiced the character of Mr. Narwhal. “That’s probably my most famous role of anything I’ve ever done because that’s the one that’s on T-shirts and sweaters,” Favreau told 20/20 in 2017.

14. Where Does Buddy Get His Pajamas?

He didn’t bring a bag with him from the North Pole. Another mystery: Where did he get all his sugary breakfast treats from? Did Walter or his wife, Emily, shop for Buddy’s sleepwear and groceries? No explanation is given.

15. Walter’s Apartment Building Is From A Non-Christmas Classic

The exterior of Walter and Emily’s home is only shown briefly, but eagle-eyed viewers may have noticed it has been in a movie before. According to Brick Underground, it’s the same as Dana Barrett’s haunted apartment in Ghostbusters.

16. Walter’s Apartment Itself Is Not

The interiors of Walter’s Central Park West apartment, however, were constructed at an old mental facility in Vancouver, Riverview Hospital, whose film credits include horror classics Final Destination 2, Freddy vs. Jason, and Jennifer’s Body, among others. Gimbels’ toy department and the prison cell in the film were also shot there. Apparently, one of the hospital buildings was still operational and had patients at the time of filming.

17. Miles Finch Has A Game Of Thrones Connection

At this point, every Game of Thrones fan should know that Tyrion Lannister (actor Peter Dinklage) plays author Miles Finch. “I’ve got houses in LA, Paris, and Vail,” Miles says when he’s angry at Buddy for calling him an elf. While Miles is referring to the ski resort town of Vail, Colorado, Tyrion memorably was kept prisoner at the Eyrie, which is located in the Vale of Arryn — also known simply as the Vale — in GoT Season 1.

18. The It’s A Wonderful Life Reference

The scene when Buddy is on the bridge and sees Santa’s sleigh crash mirrors when George Bailey (played by Jimmy Stewart) hits his low point in It’s A Wonderful Life, yet another classic holiday movie.

The shot where Buddy is caught by NY1 cameras in Central Park is most likely a reference to the 1960s movie from Roger Patterson and Bob Gimlin that allegedly featured Bigfoot, according to the website Zinzin. Buddy sure has the same stride as the mythical creature.

20. Dirk Lawson Just Wants A Day At The Spa

It’s hard to make out exactly what Michael says Dirk Lawson, the long-haired man at the biker bar, wants for Christmas, but it turns out he wants “a day of pampering at Burke Williams spa.” Nothing embarrassing about that, Dirk.

21. Mike From Veep Is Enamored With The NY1 Reporter

While reporter Charlotte is interviewing people about seeing Santa’s sleigh in Central Park, a man takes over the interview by complimenting her. This man is actor and comedian Matt Walsh, best known for playing Mike McLintock on Veep. But even if you recognized him, you probably didn’t notice he is also credited as playing “Himself.” Whatta creep.

23. The Meaning Behind Buddy’s Baby’s Name

A Buzzfeed employee picked up on an adorable fact about Buddy and Jovie’s baby’s name at the end of the film. Their daughter is Susie and Buddy’s mom’s name was Susan Wells, so she’s most likely named for her grandmother. Somehow, this film just became even more charming.

Not only is the real Santa played by the late Ed Asner, who voiced Lou Grant from Pixar’s Up, but if you feel like you’ve seen Asner’s Santa before, that’s because you probably have. The actor played the chimney-climber several times, including in the TV movies The Story of Santa Claus, Christmas on the Bayou, and National Lampoon’s Christmas Vacation 2. In a 2003 interview with TV Guide, Asner said, “This is about the eighth time I’ve [played Santa],” adding, “It is really old hat. But [my Elf character] is the ne plus ultra Santa, and all of the others were [in] preparation for this!”

Santa, being the frequent sleigh flier that he is, gives Buddy some NYC spots to hit up, including Ray’s Pizza. According to him, Ray’s has a lot of imitators but “the real one’s on the 11th.” Actually, while there was a “Famous Ray’s” Pizza on 11th street, the first and original Ray’s Pizza opened in 1959 on Little Italy’s Prince Street. Both are now closed.

If you look closely at the scene where Buddy gets a blood test, his onscreen biological father, Caan, can be seen smiling while looking to the side and then turning away after Buddy gets pricked. According to Favreau’s DVD commentary special, The Godfather star broke because Ferrell often made him laugh.

In the scene at Walter’s office where Buddy answers the phone, he says, “What’s your favorite color? Mine’s octarine.” The color is a nod to Terry Pratchett’s novel The Color of Magic from the Discoworld series. According to Pratchett’s lore, octarine is the color of magic, so of course Buddy loves it!

When you watch Elf for the umpteenth time this Christmas season, be on the lookout for these moments you missed. And don’t feel bad — Buddy would have missed these subtleties, too.

More like this
12 ’90s Movie References You Missed In 'Do Revenge'
By Radhika Menon
20 Photos Of The 'Hocus Pocus' Cast Then & Now
By Radhika Menon
24 Years Ago, 'Friends' Dropped Its Most Underrated Ross & Rachel Episode
By Grace Wehniainen
Netflix Reveals First Look At Wednesday In The 'Addams Family' Spinoff Series
By Bustle Editors
Get Even More From Bustle — Sign Up For The Newsletter

This article was originally published on Dec. 22, 2017