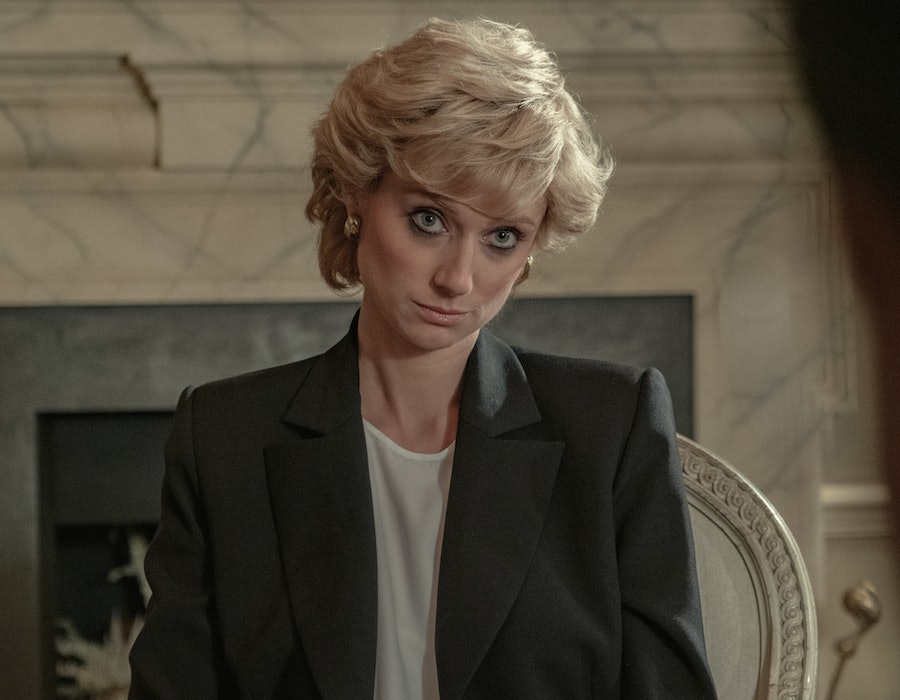 Elizabeth Debicki’s uncanny portrayal of Princess Diana on The Crown Season 5 has shocked fans — and those who knew Diana in real life, too. The late royal’s biographer Andrew Morton told Today, for example, that watching Debicki “was like seeing a ghost.” But the moments when Debicki’s performance diverges ever so slightly from the archives of Diana footage are just as interesting — like during The Crown’s recreation of Diana’s pivotal Panorama interview with Martin Bashir. The 1995 interview has been described as the “final blow” to Diana and Prince Charles’ marriage, featuring a candid discussion about their respective affairs, Diana’s mental health, and her experience being part of the royal family.

Fans of the Netflix series have had fun pointing out the tiny differences between Diana’s interview and Debicki’s performance. In the comments of one TikTok comparison video, which has amassed nearly 4 million views, viewers dissect everything from the “melancholic” nature of the real Diana’s smile to a slight sarcasm in Debicki’s performance.

Debicki gets it. While she wanted to get as close as possible to the real thing, she hopes the end result conveys something specific about the context of Diana’s Panorama moment. “So much of [how the interview] was obtained is a story of a person who’s incredibly vulnerable to what’s being done to her. There’s a degree to which she finds herself kind of ensnared in all the layers of that,” Debicki tells Bustle. “She sort of needs it and wants to escape from it at the same time. And I think me as the actor, I was interested in threading that duality through the performance.”

Below, Debicki talks about her favorite Diana stories, Queen Elizabeth II’s death, and the royal family’s response to The Crown.

Music has become a big part of The Crown — last season tied Diana to “Edge of Seventeen,” for example. Do you have a playlist or certain songs that you associate with Diana to get in her headspace?

I’m funny with music with characters. Sometimes I have things that are really connected to the role, and sometimes I just don’t think about it at all. This time, I was given a playlist by the amazing woman who puts together a lot of the pop music that we hear through the show. It was full of these amazing ‘90s, Lionel Richie-esque things. And I listened to that stuff quite a lot in the beginning.

What did you learn about Diana while preparing for the role?

When I would talk to people who knew her, the thing that I started learning [about] was her humor. She was very, very funny, quick, witty, and quite naughty and playful. Everyone’s had a story about her — like someone saying, “I once got up to do a speech. And she was sitting next to me ... and she kept pinching my bottom, just to see if I would react.” You hear these little bits, and you think, I love that person. That was a real joy for me to learn about that humor because so much of what we see in Season 5 has such a sadness to it. It’s so important to have that levity.

Does the cast find ways to laugh and have fun between scenes?

So many of the people who work on the show are very funny. Teddy [Hawley], who plays a very young Harry, is one of the funniest children I’ve ever met in my life. He just sings through everything and talks through the takes. I remember once, we had to do a scene driving in the car, and it was a very serious, sad scene. And we would say to Ted, we have to be quiet. It’s a quiet take. And then the car would start moving, and he’d lean over into my ear, into the shot, and say, “How many movies have you been in?” He was such a joy.

You’ve said that you don’t necessarily follow the royal family, but do you have to make peace with the fact that they might not love the show?

It’s very delicate territory, and I respect all the different opinions about it. As someone who watched The Crown as a viewer, I understood what it was doing. And I also understood what it gave me, which was an entry point and a great deal of compassion for these people that I’d previously only known [on the surface]. I don’t know if any of them watch it, and I think it’s part of what comes with being a public figure — that people investigate history, write stories about it, and dramatize it. We just fit into that canon of dialogue around history.

Speaking of, how has Queen Elizabeth II’s death affected filming for Season 6?

A lot of people were shocked at how deeply it affected them, and we all grieved it in our own way. One of the things that happens at moments like that is you realize what history is — that it’s very fast, and it happens in front of you. And The Crown documents that very thing. So we all suddenly had this very physical impression of what that is. But [creator] Peter [Morgan] himself said, [the show] is a love letter to the queen. And if anything, it’s bolstered that sense of, how do we do this as respectfully as we can? And as honestly as we can?

More like this
At 28, Debra Jo Rupp Was Living A Much Different '70s Show
By Grace Wehniainen
'Bling Empire: New York’ Star Dorothy Wang Wants To Try 'The Simple Life'
By Alyssa Lapid
'The Crown' Season 6 Has Suspended Filming "Out Of Respect" For The Queen's Death
By Bustle Staff
At 28, Rosie Perez Risked Her Career To Stop Playing Stereotypes
By Gabrielle Bondi
Get Even More From Bustle — Sign Up For The Newsletter
From hair trends to relationship advice, our daily newsletter has everything you need to sound like a person who’s on TikTok, even if you aren’t.