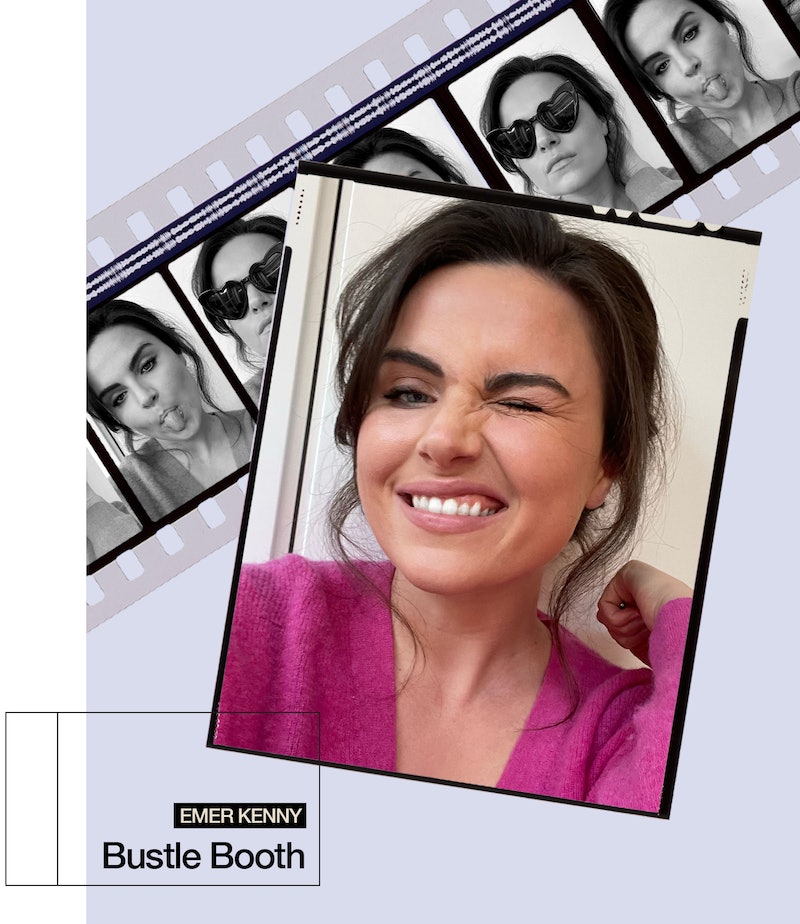 Well, “heist crew” may be a bit of a stretch. While a few of the men in Natasha’s life definitely fancy themselves as big-time gangsters, she’s the only one with enough brainpower and ruthlessness to actually pull off the gold robbery they found themselves in the middle of. Her husband Albert (played by People Just Do Nothing star Allan Mustafa, who also co-wrote the show) is well-meaning but weedy and his friends – Big Mick (Tom Davis), Sidney (Steve Stamp) and Phil 'The Captain' Pocket (Hugo Chegwin) – are equally useless.

“It was a dream role to get,” Kenny tells me. “Natasha’s just cool. And gangster. And badass. She’s the real mastermind behind the whole operation, she has all those boys wrapped around her little finger. The only thing that’s holding her back [from leading the robbery herself] is the fact that she’s a woman.” (The Curse is set in London’s East End in 1982, a time when female empowerment was sadly yet to penetrate the realms of organised crime.)

Cool and gangster and badass appear to be a prerequisite for all of Kenny’s on-screen roles, including Bunty Windermere in Father Brown, who, despite the 1950s setting, is known for being outspoken and flirty. Then there’s Zsa Zsa Carter, who every Eastenders fan will remember as Albert Square’s answer to Avril Lavigne.

But these decisions were totally intentional, Kenny explains. The Coming Down The Mountain star says she’s always on the look out for roles that portray women in all their complexity. The same goes for her writing. After spending years auditioning for one-dimensional, bikini-clad characters, Kenny began penning the women she wanted to see. Since then, she’s worked on BBC Two’s Harlots (a show famously written from “the whore’s eye view”) and right now she’s putting the finishing touches on her own female detective show. Karen Pirie (an adaptation of Val McDermid’s The Distant Echo) is already creating buzz and is set for release on ITV in the next few months.

Learn more about Kenny ahead of The Curse’s February 6 premiere in her Bustle Booth below.

Libra, duh. I can’t decide on my coffee order and am extremely elegant.

I’d love to say something from Chinatown or Casablanca but truthfully it’s got to be “Get in loser, we’re going shopping” or “Boo, you whore.”

I’d like to be eating salad from a box in Kris Jenner’s kitchen with my big-butted sisters.

“That Don’t Impress Me Much” by Shania Twain. Or anything by Dolly Parton. Someone told me in an audition once that I have a country and western voice, so I’m staying in my lane.

The amount of great actresses that are writing, directing and producing their own stuff – Margot Robbie, Maggie Gyllenhaal, Michaela Coel. They make me very excited to make work.

I googled the word “powerhouse” the other day and it said “a source of original ideas and solutions.” I’d like to be a powerhouse please.

More like this
Con O'Neill Was Connected With Sarah Lancashire Long Before 'Happy Valley'
By El Hunt
'Bridgerton' S3 Will Show A *Very* Different Side To Kanthony
By Sam Ramsden
Twitter Is Burning As Phoebe Dynevor Reveals Daphne’s 'Bridgerton' Exit
By Sophie McEvoy
Helena Bonham Carter Doesn't Think 'The Crown' “Should Carry On"
By Sam Ramsden
Get The Very Best Of Bustle/UK
Sign up for Bustle UK's twice-weekly newsletter, featuring the latest must-watch TV, moving personal stories, and expert advice on the hottest viral buys.