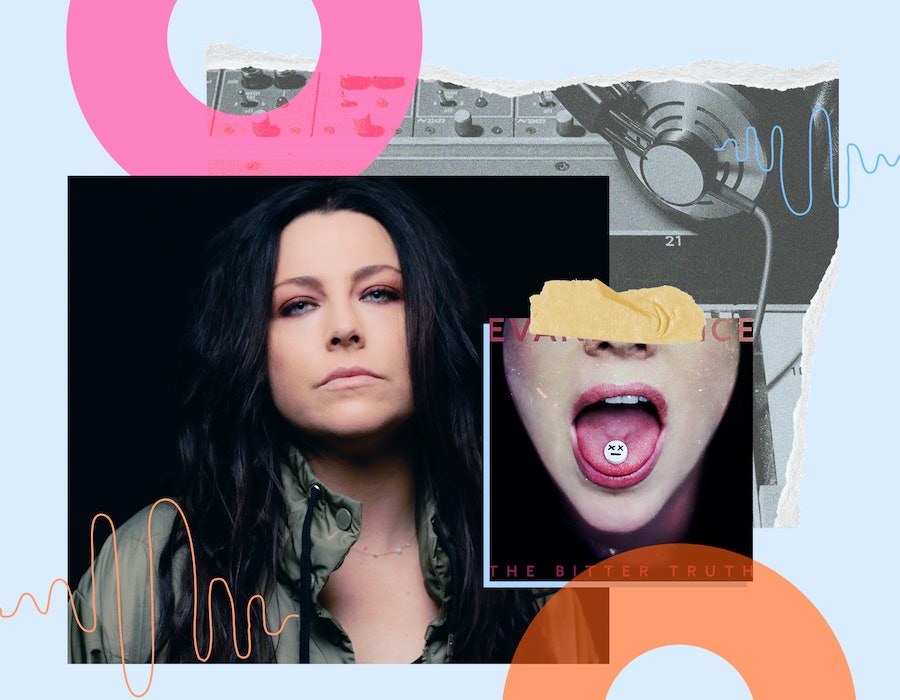 It’s going on two decades since we first heard Amy Lee belt “wake me up inside”— but even now, just reading those lyrics still brings her haunting vocals to mind. It’s a testament to the success of Fallen — the debut album from Evanescence, the band Lee co-founded — and, of course, to Lee herself.

When the group released Fallen in 2003, Lee was 21 years old and one of the few women in the macho, early aughts nu-metal scene. Evanescence would more records, always featuring Lee’s unapologetically somber lyrics, and the band reunited here and there to tour. But it’s been a long decade since Lee made music with the group — and in that time, nothing and everything has changed.

Lee, now 39, lives in Nashville with her husband and son. She admits to a growing love of animated kids’ movies (“Raya and the Last Dragon totally blew my mind”), but musically she hasn't lost her signature intensity. Writing once again for Evanescence, she already had a lot to get off her chest, and the pandemic only added “fuel for the fire” during production, Lee tells Bustle. “I had to really dig in and find myself again,” she says. “I haven't gone that deep since the very first time I was making music.”

In this new album, The Bitter Truth, we hear Lee grappling with how her life has changed. Becoming a mother, she says, was a “spiritual” experience; she waited a while to have a baby, fearing she “might not be able to be the ‘Evanescence girl’ anymore” once she did, only to find the opposite was true. Lee’s son inspires her, makes her want to be better — which certainly “doesn't mean abandoning this awesome thing that I built.”

Then, in 2018, she was hit with another change: Lee lost her younger brother, who had lived with severe epilepsy. “When you lose something so huge, suddenly all the little things don’t matter so much anymore,” she says. “I’m not as afraid of things. What do people think of me? Who cares! When the bottom falls out, there is a weird freedom in that.”

The singer-songwriter’s grief infuses The Bitter Truth most obviously in the album’s tender ballad “Far From Heaven.” And in the anthem “Use My Voice,” Lee confronts the litany of ways in which women are mistreated. Yet despite all the heaviness, the album is imbued with a sense of hope. Musically, the record offers a new take on the band’s hard rock-meets-symphony orchestra sound, introducing pulsing synths and a rawer production style. And as always, Lee is the center of it all, her voice just as powerful and expressive as it was on the band’s landmark debut.

Below, Lee opens up about writing through pain, the surreality of hearing her songs in grocery stores, and the joys of cornhole.

On staying true to your artistic vision, and stepping toward the future:

It’s been 10 years since your last album. How did it feel to throw yourself back into that process in the midst of a pandemic?

It has been a ray of light. It’s been such a good thing during a hard time. Historically, for me, every time it’s come to making a full album, it is always borne out of a struggle, out of pain, out of challenge.

The album deals with a lot of personal strife, and the grief of losing your brother. Over the years, has it gotten easier or harder to be so vulnerable in your music?

The pain in the music and lyrics, and all the places the music took me, paved the way for empowerment. The choice — and we have a choice, though it doesn’t feel like that at first, it feels like complete brokenness — the choice is what we are going to do after. A lot of this album is about the aftermath... taking that first step out of the grave and walking into the future.

Do you feel like a totally different person on this album versus the last time you were recording and writing?

I can’t say totally different, but different, yes. One of the cool surprises that happens to me, especially after it has been so long since I started this band, is when I find similarities in myself. I’ve gone all over the map by now since our first album — our lineup has changed since our first album, so much has happened. When you listen, there are things about [this record] that are really the same core thing that I was tapping into way back when I was 16 years old. There is a lot of evolution in the new music, but it has felt like a beautiful, full-circle homecoming moment, too.

You've spoken about misogyny in the music industry since the beginning of your career. Any advice you wish you could give yourself when you were just starting out?

You have to believe in yourself and your own intuition when it comes to being an artist, because you are the one that is going to have to live with that art, listening to it as a reflection of yourself for the rest of your life — and so if nobody else likes it, you better. If the whole world loves it and you hate it… you are f*cked and that is going to suck.

On playing cornhole after shows, loving Billie Eilish, and hearing Evanescence in a grocery store:

What’s the first song you put on when someone hands you the aux?

I wonder what people think is my character anymore. Tegan and Sara? I really love them. We were jamming to them in the backyard yesterday. I love good pop. A go-to is Kiiara, she’s an electronic trap artist and I listen to her music a lot. There is this one song called “Feels.” I don't know why, but I listen to it over and over when I am in a mood.

Billie Eilish. She is… [laughs]. Everybody is right, she is great... She’s different—and being different and being yourself even when there’s not a real category for it, that’s the best. That’s why Björk is my number one favorite artist of all time. I don’t know how to put her in a box; she doesn’t fit in any. And I think Billie Eilish is one of those people where she is just her own person, authentically true to herself and her music, and you can hear her real life in there—and it is dark and spooky and cool and it is totally original.

Is there a moment you really felt like a musician?

Hearing my song come on over the speakers at a typical place like a grocery store or a shopping center is always funny and weird and kind of humiliating in a way. I remember that happening before, and my first reaction whenever that happens is, “somebody recognized me and they’re being funny, they’re paying a trick on me to make me laugh.” I remember thinking that at the beginning, like, “who is the wise guy” — but there was no wise guy, it was real.

Was there ever a moment you felt ready to give up on musician life? If so, what got you through it?

When you get to the end of a full album and tour circle, it’s about a two-year process, and everybody wants to quit every time. It has always been an open idea, like maybe this was the last time. Not always in a completely negative way — like we better make this great, because we don’t know if it’s ever going to happen again. It has been good for me to let that be allowed in my brain... We gotta make this, this could be it, this could be the last thing we ever do — so I better put my whole self into what I’m doing here, and not slack off or be lazy, and give it everything I have, because we don’t know if we have tomorrow.

Do you miss touring now, after a year without live music?

I miss hanging out. I miss, of course, the incredible epic power of performing and feeling that energy in the room with the crowd. But I miss all the in-between stuff right now. In the summertime when we go on tour with the crew and opening bands, we’ll take lawn games out with us under the bus. It’s cornhole, it is always cornhole... We always pull that out, and by the end of the night — when everybody has played their show and is ready to decompress and hang out — you blast some music, take that cable, get a turn doing the playlist, and have cornhole championships.

More like this
Craig David Is Still Slicker Than Your Average
By Olivia-Anne Cleary
Even If She Tried, Beth Ditto Couldn’t Stay Away From Music
By Ivana Rihter
Everything To Know About Taylor Swift’s 10th Studio Album, 'Midnights'
By Grace Wehniainen and Jake Viswanath
Everything You Need To Know About ‘Black Panther: Wakanda Forever’
By Bustle Editors
Get Even More From Bustle — Sign Up For The Newsletter