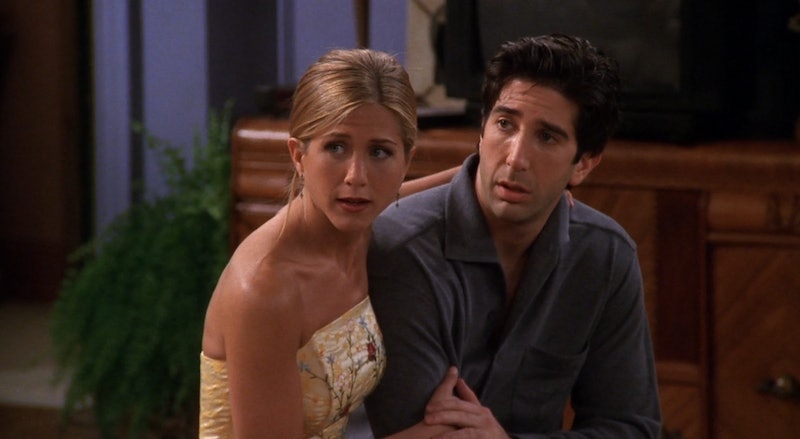 There’s a reason (or a million) why Friends Season 5 frequently appears in the No. 1 spot on fans’ ranking lists — and why it probably features heavily in your rewatch rotation, too. By 1998, the sitcom was already a critical and audience favorite — but 100 episodes in, Friends proved its ability to make things feel fresh while maintaining the familiar, cozy vibe of its titular posse.

Season 5 brought us the beginnings of a quietly coupled-up Chandler and Monica (or as Phoebe once put it, “CHANDLER AND MONICA! MY EYES!”). It saw Phoebe give birth, Joey get (and lose) his big break, and Ross cope with the theft of his sandwich. But among the best Friends episodes that Season 5 has to offer? The chaotic (and delightful) Episode 2, "The One with All the Kissing,” is the first episode where the crew is all back together after Ross and Emily’s disastrous London wedding.

There’s a lot to love about the episode, which aired 24 years ago on Oct. 1. 1998 — not the least of which is Rachel’s yellow, floral-embroidered sleeveless number, which deserves an essay of its own. In 2015, Kat George ranked every outfit (seriously, every outfit) that Rachel ever wore on Friends for Bustle and declared the dress her favorite look from Season 5. Jennifer Aniston is also a big fan and gave the chic ensemble a nod at a 2019 Aveeno event, per The Zoe Report.

Aside from sartorial wins, “The One with All the Kissing” sets into motion the magic that is Season 5 and, as a result, the remainder of Friends’ decade-long run. In fact, few episodes perfectly tap into the ethos of Friends’ big romances, like “Kissing.” To recap: Monica and Chandler are secretly seeing each other, and when they’re caught in a moment of accidental PDA, Chandler decides to kiss Rachel and Phoebe to pass off his slip-up as a new kind of greeting. “It’s probably some European goodbye thing he picked up in London,” Monica explains later.

Yes, it’s silly, but it also does a great job characterizing what kind of couple Monica and Chandler would be from Day 1 — that is to say, neurotic. While their London fling could have remained just that, “Kissing” is the first time Monica and Chandler get to try out the whole couple thing back in New York. And despite all the awkwardness, it works!

While this episode nails Monica and Chandler’s dynamic, it also encapsulates everything fans love about Ross and Rachel’s “will they, won’t they?” vibe, which reaches a fever pitch in “Kissing.” Here, we find Rachel in her lonely girl era — she’s (rightfully) angry with Ross for abandoning her in London, but she can’t help but pine for him anyway. She abandons a perfectly pleasant date once she sees Ross in distress over Emily, and, yes, she has ulterior motives. She wants to comfort him, but she also wants to be with him.

In a relationship that’s often remembered for Ross’ grand gestures (saving the day at Rachel’s prom, skipping a major work event to do her makeup), Rachel’s decision to say she still loves Ross proved she is just as active a participant in their up-and-down romance. And watching Ross process Rachel’s love declaration for a serious beat before Rachel bursts into laughter at just how “ridiculous” it all was is one of Friends’ funniest moments. “Kissing” gave the couple the space to share a real emotional connection while holding off on their ultimate romantic reunion a little longer.

Of course, if your favorite love story on Friends was always the platonic relationship between the group as a whole, “Kissing” has plenty of that, too — including the moment when everyone tries to make a very pregnant Phoebe feel included after she missed out on London. Their plan to take her to Atlantic City as a consolation trip is foiled when Phoebe goes into labor. But it doesn’t matter all that much because the group immediately saves the day by turning the moment into an inside joke in which she can finally be involved.

So, if you could only watch one episode of Friends to get a sense of its key relationships (romantic and otherwise), “The One with All the Kissing” is a pretty strong contender.

More like this
Courteney Cox Recreated An Iconic 'Friends' Scene To Surprise Fans
By El Hunt
17 Photos Of The 'Wednesday' Cast Vs. The 1991 'Addams Family' Cast
By Grace Wehniainen
The First Trailer For 'That '90s Show' Includes So Many Nods To The Original Series
By Jack Irvin, Alyssa Lapid and Grace Wehniainen
This Classic Movie May Be Key To Figuring Out Who Dies On 'The White Lotus'
By Grace Wehniainen
Get Even More From Bustle — Sign Up For The Newsletter